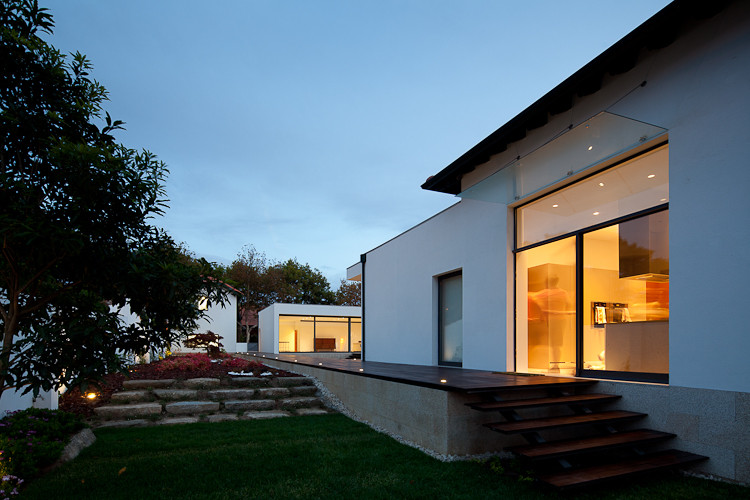 Text description provided by the architects. A hundred years, more or less, separate the two phases of the house, the phase of the performance and that of the proposed expansion. The first phase (1906) is marked by a morphology and typology usual in Miramar Beach, characterized by the nostalgic language and romantic image of the early twentieth century. It consists of two volumes, one to the north, associated to the access road to the sea, for a single family dwelling, the other to the south, to the garage. Both are expanded in the uses and in the shape by two volumes which mark the second phase (2012).

Those new updates add a range of individual and social uses, sizing spaces for permanent use and enjoyment, common room as in the North, and satisfy the most demanding functional uses such as the kitchen, laundry and linen closet. Receives also to the North, a library where knowledge is assimilated and musical instruments are rehearsed. The need for a space for a business manager and a studio for a creative fashion designer installation create conditions that validate the concept of work at home. A new volume is destined to the garage and to the living situate to the South.

The additions and the volumetrically expansions described evolve over the central empty space of the lot, creating a lively patio, formalized by the two glass facades that visually relate the family experiences to the north and south. Between the two halves, there is a floor walkway that promotes a buried distribution associating the two rooms. The daily occupations, between the waking and the dinner, through playing, creating or studying, occupy and move through the various spaces of the various volumes. Divided into individual spaces and the vocation of different users, but reunited in social spaces, the organization and evolutionary rotary animates the house that progress accordingly with the ages of their inhabitants.

A formal and spacial clearance characterizes additions and expansions in contrast with the dated image and language from existing. The horizontal spans, extensive, compete for this time distinction and separation, clearly contemporary. The traditional or contemporary materials and construction systems today introduced assume neutrality and confirm the range of about a hundred years, therefore with unity and spatial continuity.