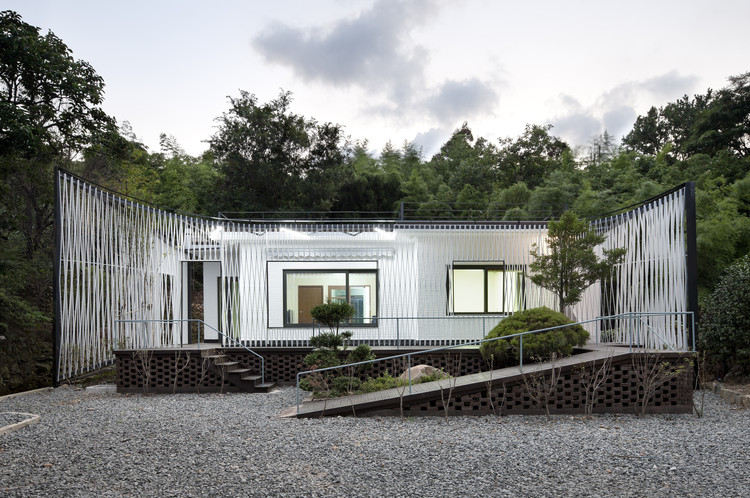 Text description provided by the architects. Rural houses, or farmhouses are easily seen around countryside. However, these artificial forms are being placed here and there thoughtlessly in Mother Nature. A common stereotyped rural houses around Namhae, Jindo, and Pyeongchang have set a scenery of 20th century’s Korean farm village. One might say, the system of a local constructor also being a designer also being a constructor is extremely economical in terms of building rural houses. However, mother nature we have is too nice to only covered with identically produced rural houses. The fantasy of poor copied western wooden houses and red brick houses become formed a typical figure of Korean rural communities. Without any concern about an infinite landscape or a spirit of bamboo forest, red brick houses have become a romance dream for farmers, and an ultimate architectural goal for architects.

“In the new house, wish I felt at home and attached to its surroundings,” the client who owns a design company in Seoul, asked. He had already requested a local carpenter to build a rural house at his hometown, but the result couldn’t fulfill his wish. Afterwards, whenever he visited the site, he didn’t feel like living there after his retirement. The house was simple with only two small rooms, which meant to be a summer house. However, to be honest, the building  was out of its proportion and was not good enough to hold the beautiful landscape of Namhae. The client respected the scenic view and sensitivity of the site itself.  He wanted to give a unique identity to his house that can harmonize with nature that the building put in. In urban point of view, this project was an unremunerative and unordinary one, may be too much. One cozy spring day, this interesting project started.

A line produces another line. Sky-line, a line made by mountain-line, and land-line are all the Absolute’s line. Newly drawn line means capturing the earth and the point where the sky and the land merge. After all, Cheo-ma possibly means setting a line where mankind and above meet. It is a human beings’ imaginary action about nature and sky while responding back to the beauty of its topography. As a strong stroke from calligraphy, Cheo-ma lines asymmetrically condense the energy of a line while resetting the relationship between mankind and the nature. The Cheo-ma lines are magnificent abstract boundary that mankind visualized and also a tool to reveal the identity of the land. It embraces the land in its own line and disguises itself in the nature’s ridge at the same time. This paradoxical duplicity of Cheo-ma meets the Korean philosophy of being harmonious but not the same and being similar but different. It is our lives and the virtue that the line has.

It bends to one side. And it bends again to another axis. Bent steel contains energy in itself. This embodied energy is the inherent strength of property of matter and the point where it balances out. We make a line with a grinder on the bended steel. A square shape steel pipe warps through curved surface as if it will burst right away. 3 dimensional bending is a process of exposing the nature of bended steel by making a line on it. The numbers on the drawing might be useless during the bending. 2 dimensional bending values are only theoretical figures when we try to bend 3 dimensionally. Workers’ sense, constant exertion and endless trial to find the true identity of the curve will be the only realistic solution for 3D bending. The drawings are only a base data to minimize the trial and error. It originates from how one controls and spreads internalized energy of property of matter which depends on the maker’s long time experiences and skills. With the heat we can bend a flat steel plate, but a square shape pipe refuses to be tamed. As we force the pipe to be bent, the energy captured within. The line of the Cheo-ma starts from as we bend a previously bent force to a different direction again. It is a long journey of seeking an answer to a mystery of balancing between physical force and three dimensional geometries.

The façade that is created by Cheo-ma curvature, gets filled with parametrically patterned aluminum louvers. Two perpendicularly arranged diamonds form a simple unit to flow through a 3 dimensionally bended line to compose the main façade. Because of the tight budget we had to come up with a best rational solution of how to construct rather than how to design. Discussion about the practical construction was the main issue in order to solve this problem. That is finding the material which is easy to find, simply workable at the site, and strong enough to face open air, and the way to handle the material. To construct a curved-line-shaped skin pattern, a repetitive module was used; making a line on easily manipulatable aluminum bars with a grinder, and arraying the diamond-shaped modules next to each other. If we say that the steel frame defines the line of the Cheo-ma, the diamond-shaped aluminum louver pattern sets a boundary between land and the house like a filter. These louvers protect the building from the rough hot noonday sun and sometimes it privatizes the inside from the outside while restructuring the scenery.

A small, but tough 2-month long construction was over during the monsoon season. Because of my sweet words Mr. No, a construction field manager of window frame company in Yong-in, had to stay in a secluded house and listen to sing from scops owl every morning for two months. Employees and Employers had to save a word and overcome the construction of 3 dimensional bending that they never experienced before and the pattern of aluminum louver that changes a centimeter every each members. The construction can be seen very simple in a way, but the process of the renovation was not so. From harmony with color of the pre-existing house to electricity wire from sliced slab, everything needed to be very precise and perfect. Luckily, Mr. No was very familiar with all kinds of steels, so he could deal with every construction that we needed, even connections of tiny steel pieces that rotates in each step. In order to create a line within a beautiful landscape we visited Namhae a lot without noticing spring was almost over. Thanks to the construction we could enjoy the beautiful landscape of Namhae and admired the perfection of lines created by nature. We finally draw a line in that scenic place.