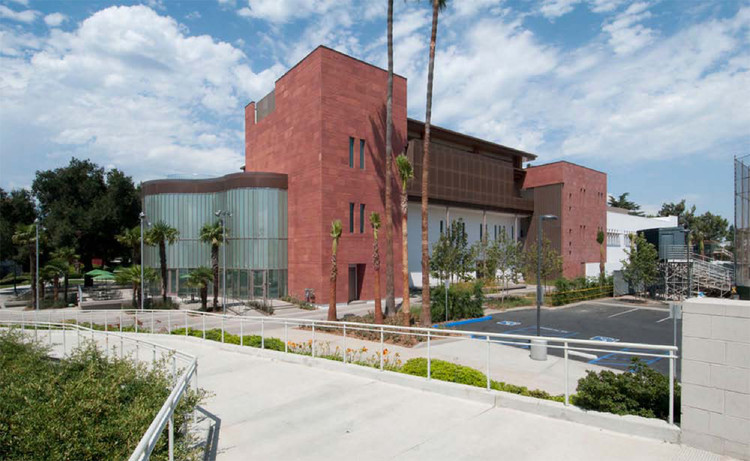 It was determined in the early 2000’s that a new 40,000 square foot Campus Center would be built north of the existing gymnasium at the intersection of C and Second Streets near the center of the campus.

The Campus Center is viewed as instrumental in consolidating disparate student life activities across the campus, and equally key to increasing recruitment and retention of students and faculty on campus.

The narrow footprint of the site suggested, early on, that the facility program of 40,000 square foot would need to extend vertically to a mass which would have a significant portion at a three-story height.

There is significant vertical interpenetration in the Campus Center, the planning and the volume conceived very much in concert; according to the following strategies:

• Identity , View, and Massing. The axis of C Street penetrates into the westerly third of the site, providing a dramatic view into the site from as far as Bonita Avenue, and providing an even more dramatic view out to the San Gabriel Mountains. The presence and force of this connective axis led to several early planning and massing decisions:

- The main entry to the building was planned at the termination of this axis. This entry consists of a linear, 2-story gallery of “Mixing Hall”, off of which are immediately located Reception, Student Recreation, Student Life Offices, and Cafe on the Ground Floor; and Classrooms along the Second Floor balcony – the flexible non-specialized classrooms an intentional addition to program to insure the movement of a maximum number of students and faculty through the Campus Center.

- The three-story portion of the facility is also massed with its centerline on the street axis, at the westerly third of the site. This third story consists primarily of a multi-purpose Banquet Room directly above the entry gallery area, with a ‘Pre-function Porch’ sheltering the long entry wall, cantilevering out 15 feet over the sidewalk. With sight-lines at some 35 feet above grade, both the banquet room, (with glass wall and doors to the north), and the Pre-function Porch, (also with continuous French doors and glass handrails), have panoramic views of the mountains framed between the campus’ oak tree-tops and the sky.

- With the three-story mass established as the building’s center of gravity, the building tapers steps down to two story glazed linear offices to the east, and the curvilinear two story Café to the west. The roof of this Café serves as an outdoor extension of the third-story Pre-Function Porch, with a gathering view-deck surrounded by a green roof.

• Transparency and Daylight. Fortuitously, the entry wall of the building that faces the connective axis of C Street is oriented virtually cardinal north. Except in high summer, this wall is free of direct sun, and thus was designed as a continuous glazed curtain wall to maximize the penetration of glare-free day-lighting deep into the narrow footprint of the building. This strategy contributes significantly to energy savings and to the building’s Silver LEED rating.

Additionally, the north-facing curtain wall makes a statement, of maximum transparency of Campus Center activities – literal window onto the life of the campus. Day and night, a student or campus visitor will be able to ‘read’ the building’s activities and occupants from the exterior of the building, whether driving of walking. This celebrative legibility of Campus Center activity will be exposed on all three levels, its visible Mixing Hall encouraging campus social sharing, academic collaboration, recruitment, and retention.

• Mixing Hall. In addition to the long two story gallery providing internal view and interaction among Campus Center visitors, two anchor-points at either end of it will further that goal:

- To the west, a 2-story café terminates the linear form of the building in a glass-walled curvilinear room that wraps a full-service open kitchen and café table seating. With the café’s west exposure, the double-glazed wrapping wall is heavily fritted in a white dot-tone for sun-shading. Additional café seating is provided on an outdoor patio west of the building, with rich opportunities for people-watching re: campus circulation patterns.

- To the east of the linear entry gallery is a three-story “Circulation Lounge,” with a ceremonial open stair to the second floor gallery and the third-floor Pre-function Porch. Wrapped in a curved fritted glass similar to the café’s wall, this Circulation Lounge juts out over the sidewalk, and additionally provides discrete gathering and study areas that are an integral part of the Mixing Hall concept.

• Support. With these social functions anchoring the three-story westerly core of the building, the easterly portion contains two floors of offices, offices and workrooms for student life on the Ground Floor; and offices for Dean of Students and Student Literacy/Career Support on the Second Floor. These spaces fall behind the continuation of the floor-to-ceiling north curtain wall and its return on the east side of the building, providing day-lighting into the core of these office spaces.

• The Campus Plan. The University of La Verne anticipates, and has in planning, several projects on its perimeter, specifically directly south of the new Campus Center. These projects include relocation of the existing southerly baseball field, a residential building, and a formal quadrangle, which will squarely anchor the Campus Center with open space on the south. Accordingly, the Campus Center has been designed with a major southerly entry on axis with the main entry, and its southerly elevation is of a scale that anticipates a grander foreground in the future.

• Architectural Expression and Materials. Physically, the University of La Verne was a credible but aging campus, with no particularly remarkable architectural gems. The architectural expression of the Campus Center is at one with its charge to reach out to new generations of potential students and provide an iconic center for their recruitment and retention. While comfortably fit to the warm materials palette of surrounding campus buildings, the Campus Center is less about style than about embodying specific concepts of social interaction, institutional transparency / translucency, and sustainability.

This expression is focused in the building’s north wall and exposed internal Mixing Hall, where fritted and clear glass in a three-story aluminum curtain wall system work in combination with vertical copper-clad piers and horizontal copper-clad spandrel and eyebrow elements, these elements forming both a sense of overhead shelter and a metaphoric proscenium housing the rich activities within.

Two massive stone-clad stair masses anchor counterpoint the lightness of the extensive glass, and visibly anchor the building to the ground. The red Indian sandstone that wraps these masses is also revealed along the inner wall of the Mixing Hall’s gallery. Washed with light, it gives off a seductive warmth to the campus at night.

The glass and copper palette also dominates most of the Mixing Hall interior, in combination with a polished concrete floor. Glass – or translucent variants of glass - is employed in the details of the interior as well as in the variously fritted curtain walls. The gallery railings, the Circulation Lounge stair railings, and the Pre-function Porch railings are solid glass cantilevered from the floor decks. Cast channel-glass is used along the Ground Floor of the Mixing Hall Gallery to separate the lobby from Student Recreation and from Student Life Offices – this channel-glass serving as a custom-lit donor wall along a portion of its run. Backlit 3-Form translucent panels are used at both the Reception Desk and at the Café service line. This combination of transparency and translucency has its obvious repayment in a maximization of interactive views, in an overall environment of reflection, soft sparkle, and lucidity.

• Sustainability. The design took an approach to sustainability that targeted and achieved a Silver LEED rating, but emphasized major strategic sustainable initiatives over point gathering. The soft and ambient quality of the day-lighting, in all varieties - (clear and fritted glazing, channel glass, clerestory windows) - formed a dominant focus of design, as did the provision of high quality views from almost all of the occupied spaces.

Equally important was the application of a minimal materials palette, anchored in a raw, regionally-source concrete floor for the major public area. In addition to the steel content, materials rich in recycled content include the carpet tiles and the casework, clad in back-lit translucent plastic.

The roof surfaces are single-ply liquid membrane highly reflective roofing, in combination with a walkable deck and a demonstration green roof atop the Café. 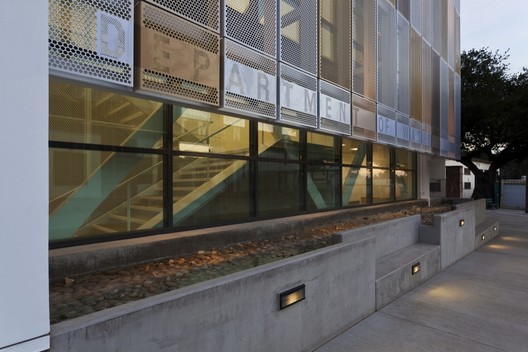 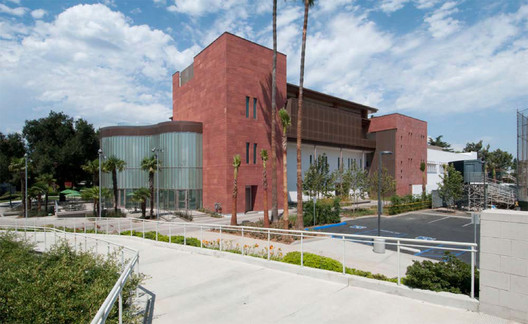