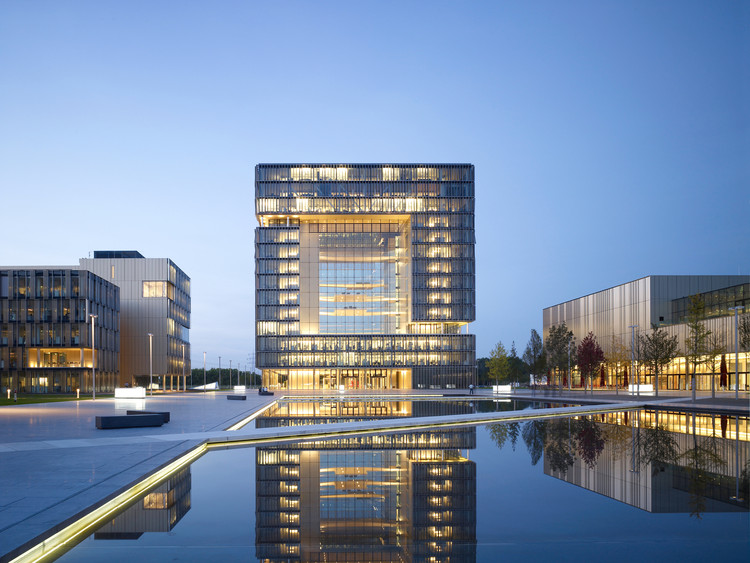 Text description provided by the architects. Announcing its return to Essen, the principal, ThyssenKrupp AG, clearly turns its attention to the region where the technology giant has its roots. The company continues to write its history on the grounds of the former Fried. Krupp cast iron factory from 1811. Typologically, the new quarter follows the idea of campus architecture, an ensemble of various individual buildings on a “green carpet” with trees, connecting paths and small squares. Expectations were focused on a structure that would flexibly react to changes within the company. The Q1 building is the readily noticeable accent at the centre of the structure-providing main water axis.

The new campus symbolizes openness, coming together and communication, both within the quarter and looking outward, toward the bordering city neighbourhoods. The overriding design motif applied to all the new buildings on the campus is the “shell – core” principle. All buildings in the quarter are composed of L- shaped elements enclosing a shared central space. This gives a clear alignment not only to the headquarters (Q1) but also the forum building (Q2) and the neighboring office buildings Q5 and Q7. There are two types of facade: One faces the central space, the other faces the exterior and is therefore responsible for the impact the buildings create in the surrounding area.

It is not the height, but the unique, expressive form of the Q1 building that bestows its special status on the campus. The use of geometrical nestling of its volumes around a common centre creates not only an exciting exterior appearance, but also fascinating interior spatial progressions. The glass- roofed atrium is at the building’s centre. It rises over 10 storeys in height and is segmented by countless mezzanines and footbridges. Two monumental landscape windows act as delimiters on the north and south sides. The new, highly efficient sun protection system has a key role in the overall appearance of Q1. The circa 400,000 stainless steel lamellas are oriented in response to the location of the sun and enable light redirection without blocking the view.

The Q1 building has been awarded a gold certificate by the German Society for Sustainable Building (DGNB). The building has also received the BDA Essen award, the “2012 German Steel Construction Award” and one of the “LEAF Awards”, in addition to others. 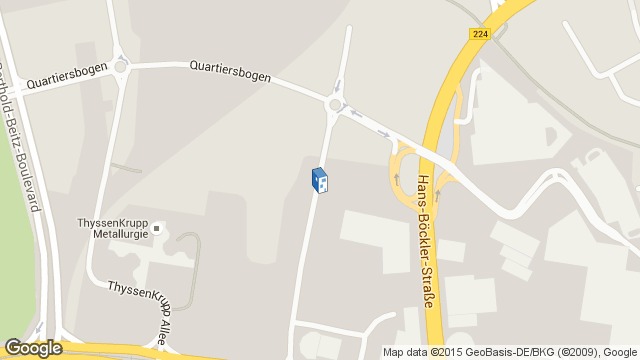