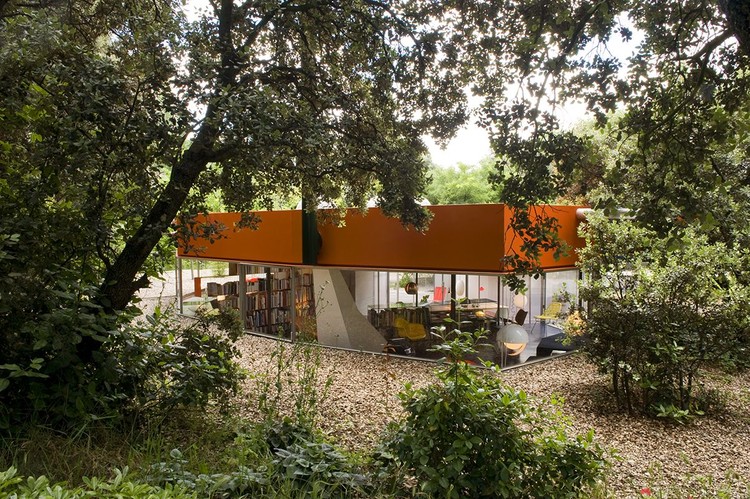 Text description provided by the architects. This is an allotment on a gentle slope covered by evergreen oak, elm, ash, acacia, prunus and plane trees, all seeded spontaneously by birds from the surrounding plots. All of these trees and their canopy perimeters were measured and drawn on to plan. Le Corbusier said he wanted the empty La Tourette courtyard to be populated naturally with vegetation, by birds and the wind. Le Corbusier left a void in his architecture to be populated by nature. We think this project has arisen in opposition to that idea.

Nature has left us a gap and here, only here, can we populate it with something that is architecture, because it is rational. We agree with la Tourette, however, that neither camouflage nor integration nor what is called “ organic architecture “ have ever really been sought. The house adapts by pure opposition. In Italy, some of the motorway bridges are painted sky blue. An innocent, sweet camouflage that only works as expected on a few days and at certain moments, yet we find it most beautiful on the days when you can actually see the trick. The ultimate purpose is (it would be an exaggeration to say “always”)whatever is admired.

This allotment is already choked with something that should be preserved, and the only choice left to us is to fill in the remaining interfaces, only the areas that are possible, remnants, between the trees, which we have no intention of touching at all. Respect, but to a manic extent. The house is set beneath two platforms that strive to arise our gaze above the natural setting towards the eastern sky. The views of the house look at the base of the natural environment. The project consists of these two platforms. The house is an addition underneath them. These two platforms are comfortable, with soft pavements, for living inside most of the time. Each one has a different colour an a different level to facilitate access. Each one corresponds to an interior time of the house, and each one is nothing without the other. The only thing we can say about the interior space is that it goes unnoticed. It arises as a remainder from the reaction of the only space being worked here. Outdoor space.

This is a project that is only related to the exterior. Two horizontal platforms cultivate it in generic proximity but a metaphoric distance. Distance in which we speak of inanimate nature, reproduced or abstract, also a reflection of an earth and a sky , which becomes involved with both but belongs to neither. The resemblances in its zoomorphic or anthropomorphic silhouette that seem to belong of similarities, the conincidences of the situation of the spherical lightwells/lookouts with eyes and the other skylights with backbones, are just coincidences. 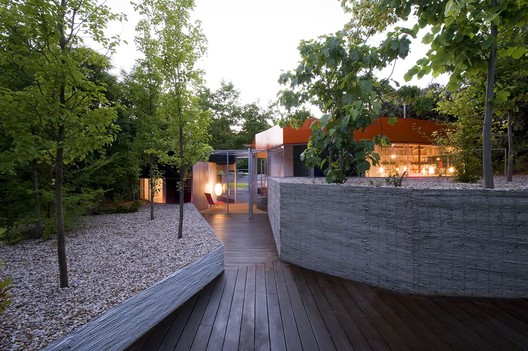