Mumbai, like many populous modern cities, has a traffic problem that may be better be categorized as a traffic nightmare. At the Kala Nagar Junction, where five main traffic arteries merge to connect nearly 60,000 commuters per hour from the Island City to the western suburbs of Mumbai, the BMW Guggenheim Lab and Mumbai Environmental Social Network launched a competition to search for realistic solutions to the infrastructural tangle. Likely designed when traffic congestion was not as severe, the Kala Nagar Junction is no longer capable of accommodating the daily commuter demand. The competition, open to students and professionals, called on participants to consider solutions that not only resolved the traffic problems, but also produced public spaces and safe pedestrian routes. The six winning designs - 3 from the professional category, 2 from the student category and 1 people's choice that was decided by community votes and visitors to the Guggenheim Design Lab. 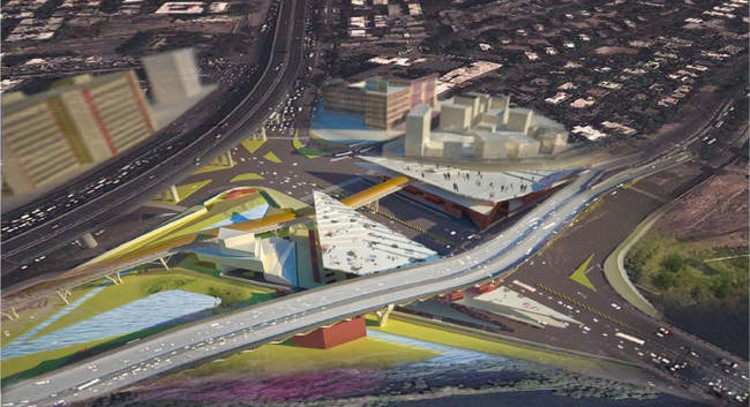 While the routes of the traffic exchange, oriented North-South and East-West, are congested with a constant flow of vehicles, it has substantial peripheral land that could be used alleviate traffic and provide pedestrian respite. The six finalists reveal elements that challenge the organization of the current junction and propose variable ways to address the concerns of traffic congestion which is not unique to Mumbai. Engaging the medians and pocket spaces left over from the infrastructure is one way to introduce a variety of uses, but may ultimately cause more traffic congestion. Creating passage over the roadways through different elevations, however, isolates the two functions of the street and creates safer pedestrian paths. Negotiating highways, parkways, junctions and intersections between vehicular traffic and pedestrian flows has been a recurrent problem in big cities. The dangers of unwieldy traffic congestion and the air and noise pollution threaten public spaces and pedestrian safety especially in mega-cities like Mumbai where the population is approaching 20 million and cars are added to the roads at a rate of 100,000 per year. The emphasis on alternate forms of transportation in these projects takes into consideration how the population can help alleviate over-stressed roadways. Dedicated bus lanes, bus bays and stops, and bicycle routes is one way of alleviating the roads, making alternate uses more accessible and safe and smoothing traffic patterns along other lanes.

Mayuri Sisodia and Kalpit Ashir (Professional Category) submitted a proposal that weaves the traffic routes while simplifying directional traffic through merging lanes instead of perpendicular intersections.  It is coupled with public infrastructure such as urban amenities, public transportation, landscaping, and medians. There are also dedicated bus bays for public transportation and scattered islands for community activities and recreation, and abundant cross walks between them.  The land under the flyover is re-conceived to accommodate parking and additional pedestrian crosswalks.

Radhika Mathur (Professional Category) proposed signal free traffic flow for smoother commutes.  The road is flanked by a multi-purpose landscape and a bridge provides a crossing point for pedestrians.  The new junction is conceived as a free flowing highway with ramps and a flyover that make connections between north-south and east-west routes.  Pedestrian routes are simpler and more direct, the road areas are stream lined, traffic signals are reduces and more area is devoted to public use to accommodate different community functions. This type of proposal isolates the two simultaneous conditions of vehicular traffic and pedestrian flow at the junction.

Sweta Parab and Hrishikesh More (Professional Category) developed a proposal that isolates moments on various elevations at the junction.  Traffic moves on the ground and via underpasses.  Dedicated public transportation routes line the periphery of the roads with easy access for pedestrians.  Footpaths and a promenade bring pedestrians from outside the junction to the center where connections to proposed green spaces and anticipated public infrastructure and commercial areas that can further develop the site into a community spaces.

Team DYPCA: Shreesha Arondekar, Gargi Thakur, Pooja Kudale, Anaya Patil, Snehal Sonawane, Asmita Rai, and Sayali Potnis (Student Category) proposed an organization that stacks a variety of uses along the traffic junction.  The flyover serves as a covering for newspaper kiosks and commercial spaces, while an additional skywalk provides safe places for pedestrians to cross the intersection or use as community space.  As with many of the other proposals, green space is developed in the pockets between the roads.  Roadways are divided by use, peripheral lanes are used for slower moving traffic, turning vehicles and public transportation.  The intersection is also simplified by eliminating the perpendicular intersection and creating a direction link that moves north-west along the site.

The people's choice project by Vedika Tulsiyan, Jaynish Shah, and Karan Sancheti introduces elevated gardens for pedestrian use and bridges that cross over the roadway, isolated from the traffic congestion below.  Broadened medians with different uses engage the spaces in between roadways and make for safer street crossings.  The direction of traffic remains untouched, but new intersections are introduced that also accommodate a walk and cycling track.