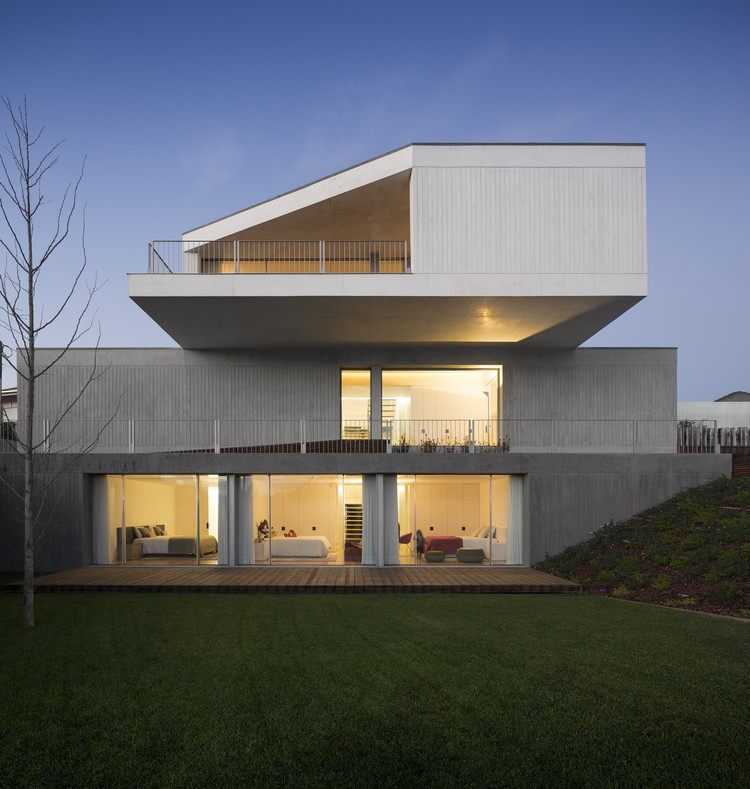 Text description provided by the architects. The presented house, built in an irregular area, with a constant pendent, is located in a rural village, surrounded by a certain kind of dispersion, diversity of typologies and scales creating a lack of visual unity in the surroundings.

It has, however, great salubrity conditions, a good solar exposition, dominant altimetry in what concerns to the visual and physical connections to the neighborhood. The house is developed in 3 different levels, having two of them a visual and physical relationships with the exteriors and the last one with a great visual expansion till the horizon, searching for the sea, in south and oest.

The accesses are solved in the middle level, not only by foot but also by car, in a direct connection with a patio and a garage. It´s in this level that the main service areas are, such as laundry, kitchen or outdoors areas like barbecue, patio and backyard.

It´s also in this level that we have the main access to the interior, by a covered corridor, maintaining the view through the garden, the pool and entering till the most used areas such as dining and living room, kitchen, etc..

The inferior level, created by using some excavations in the exterior, is limited by a wall in oest, the field on south and the pool/garden on est. This area, being a more restricted area, allows however a more expansive approach despite the intimate relation established with the interior areas, exclusively bedrooms.

These areas draw the façade, with its rhythm, modulation and individualization of itch one.

Finally, on the upper level, the sub-spaces created, empathizes the views, the visual horizons that allows equally having a strong connection between the interior areas and the exterior ones.

In global senses, we can say that the building, with its needs, was created as a somatory of 3 different volumes, all of them built in concrete, but at the same time in 3 different concrete colors, allowing some identity in between… it also improves the dynamic effect of the volumetry and reduces the impact of a more linear construction.

It also works better with the more restricted surroundings, searching for the right balance. In the north façade, the creation of a ventilation and illumination patio, behind the stairs, turns itself in a particular moment, embracing the stairs and turning them in a linear element that connects all the 3 levels and participate not only functionally but also in the image and design of the house.

The proposal embraces some naturality, distant of conventional rules and interacting with all the existing constructions.

This approach tries to evidenciate also some connections with the non-built environment, searching for the wright patines and colors in which the different materials will turn on.

By the exterior, the concrete and the windows with big glass areas, such as the wood pavements, tries to evolve the vegetation and getting old, without being old.

By the interior, the white color in walls and carpentries, the wood in the pavement and the stone in the service areas, allows the creation of a simple environment, valuing the unity and homogeneity.

The house has also a strong connection with the exterior areas, presenting a tendency to create some naturality, despite the contemporary image, searching the continuity instead of getting ruptures.