Save
Housing and Shops / Christ & Gantenbein 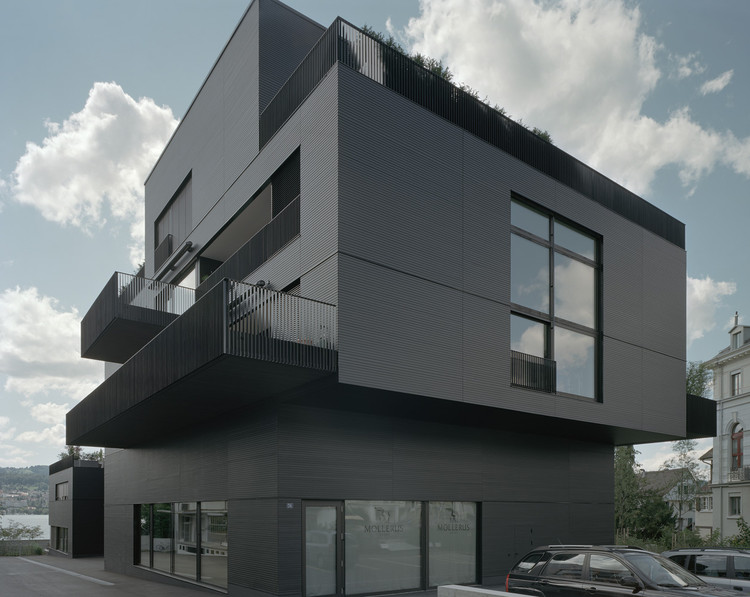 Text description provided by the architects. In the centre of Erlenbach, a town on the edge of Lake Zurich, a new housing building has been constructed on the premises of the Schärer Erlenbach company. The former factory, where machines for the textile industry were produced and which used to be so im- portant for the region, has also received a new front building.

The factory building and the housing building communicate with each other through their architecture and their materials. The former industrial building with its horizontal ribbon glazing uses a classical modern language. This language is also employed in the front build- ing. It gives a new face to the factory, with a big window looking out to Seestrasse. The housing building is related to the factory building in terms of scale, the composition of the facade and the large banks of windows. But concerning their materials and colours they differ distinctly from each other. Thereby the colour gives hints to the respective use of the building: the old plastered factory build- ing that accommodates several small businesses and workshops and the new front building present themselves visibly to the public in white brick, whereas the five-storey housing building with its an- thracite-coloured wood facade is elegantly withdrawn – during the design process the famous black-and-white pictures of wood- construction pioneer Konrad Wachsmann played an important role. An overall urban setting is created by the commercial activity along Seestrasse and in the factory building.

The structure of the housing building reacts to the surroundings, to the location's quality of light, view and space with individual floor plans for each apartment, from compact to elongated, from winding to sprawled out and to maisonettes. None of the 13 apartments is alike and thanks to the graded stacking of volumes there are mani- fold views into all directions and generous terraces on every floor.

"From an architectural point of view the new house is the result of a crossover-strategy. Elements of industrial origin like the raw con- crete inside and the large-sized window banks in the dark surface of the facade are combined with luxurious housing elements like the extensive terraces. Depending on the point of view the building has reminiscence of a pragmatically constructed, industrial type of archi- tecture or of a huge villa with virtuosic, three-dimensional wings. In this context the architecture of Mallet-Stevens might come to one's mind. The oscillation between very different images coins the sce- nario for the whole project. In some way the complete urban situa- tion can be read from this exciting ambivalence. Erlenbach and the "Gold Coast", the possibly most privileged suburbia of Europe, are shaped by an ambiguous identity: the relics of an agricultural and industrial past that are superimposed by housing architecture striv- ing after luxury. As architects we are confronted with the task of gi- ving this very specific, almost fathomless reality an authentic and sustainable shape. The Erlenbach project is to be considered as a contribution in this effect."