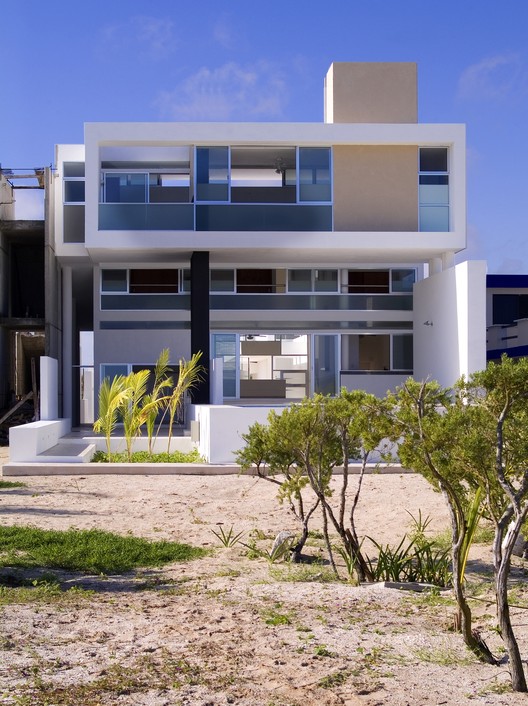 Text description provided by the architects. On a piece of land located in Uaymitun at the north coast of the Yucatan Peninsula, with 12.5 meters of seafront, we were asked to design a summer house that would accommodate a three-generation family: one house for the owners and their children; and a small apartment for the owner´s parents. The initial challenge on designing the house was to accomplish that all the bedrooms and social areas had an ocean view, in spite of the reduced front to do so.

One of the requirements posed was to achieve the independent function between the main house and the grandparent´s apartment, keeping a sense of unity but providing privacy and autonomy for both. The partial independence of the grandparent´s apartment and its convenient location on the ground floor, gave rise to a longitudinal division of the house’s program in the ground floor.Both are arranged so they have independent access, as well as full frontal views towards the sea. A difference on floor levels is generated between both parts to give them privacy, still forming part of the same volume.

A group of overlapping roofs and volumes (as conceptual big scaled “steps”) presents a succession of thresholds when entering the house from the garage zone. with the ocean as focal point at any given moment. On the ground floor, the social areas - access, living room, dining room, and terrace - form the central part of the floor plan, succeeding each other in a linear fashion, with an ocean view as focal point at the end of the line. In the north-west corner the kitchen is laid in the same linear axis and opens toward the terrace, with the service areas in the back side.

On the first level up the stairs lay three identical rooms for the children. Much attention was given to providing equal circumstances and the same visual relationship with the context for each of these bedrooms. To achieve cross ventilation the roofs are stepped and overlapped vertically, generating ventilation gaps between them.

The master bedroom is separated from the main body of the house by an upward movement of the volume, which allows the secondary bedrooms their ocean view. Additionally, this arrangement allows for cross ventilation in both the master bedroom and the social areas below. Formally it’s presented as a floating element over the terraces –the most used social space- giving them diversity of scales and making this area a great spatial articulator for the private and public areas of the house. 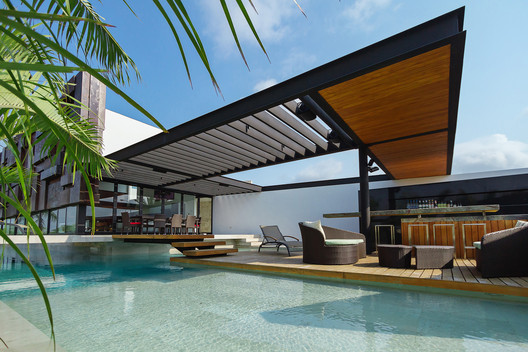