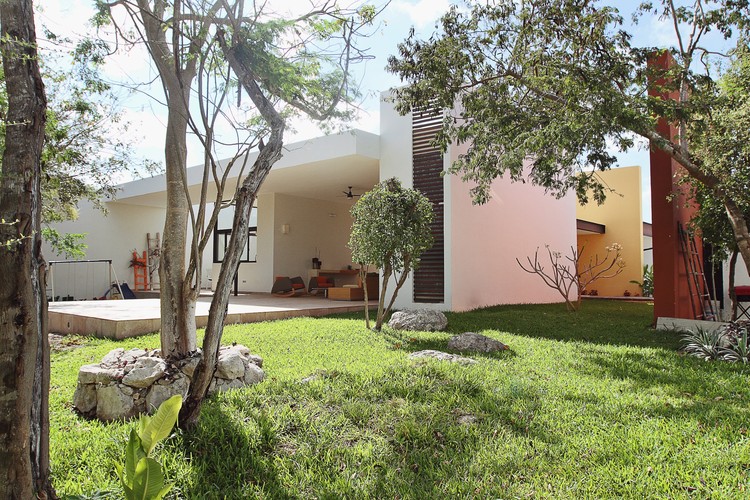 Text description provided by the architects. Merge of architectural influences from different periods, the design of this house seeks to bond tightly with the lush vegetation of the landscape through a unifying point of view, sober and efficient. This two-bedroom house was designed for a young couple with one son. The site on which it is located and its context are heavily forested with the local sub-tropical vegetation. The less densely vegetated area was located to deploy the house. This natural context often transformed into conventional gardens is conserved and integrated as a primary element in the design of the house.

This house’s design is influenced by several architectural currents from different periods that at first sight would seem irreconcilable. The logic behind extending the interior space smoothly toward the exterior with elongated horizontal elements is a clear influence of Mies Van der Rohe. The distinctive dominance of solid wall over bays,  producing surprising scenarios, in conjunction with the use of color is influenced by the architecture of Luis Barragan… etc. However, the colors used are derived from a regional source: inspired by traditional haciendas from the end of the 19th and the beginning of the 20th centuries; also taken from this source are elements such as the height of the pediment and the relationship that this generates with the environment, although managed at different scales. Finally, the influence of the climate, its tropical setting and the environmental qualities led our work to a house in which the only enclosed areas are the kitchen and bedrooms, so the social and the recreational spaces of the house are outdoors, notwithstanding some of them with ceilings, but fully open to the horizon as terraces.

The creation of diverse relationships between interior spaces and the environment was of great importance to the design process, becoming a differentiating characteristic for each space, so for example the main access is a discreet passage across a garden that initially surrounds part of the landscape with monumental walls, creating a space of silence and contemplation. Keeping with the initial path, a service volume gradually opens way to the surprisingly exterior quality of the social area, only separated from the exterior by three separate walls and an outward projecting slab that unifies both exterior and interior spaces.

Continuing the walkthrough, the next closed area is perceived as open through the use of glass walls and the scarce width of the aisle. First to the left are the kitchen and a patio, contained by one side only, in which we find a small dining table. After this, there are the some steps that briefly ascend to the bedroom area, so that both bedrooms are somewhat higher than the rest of the house, which, in conjunction with the densely vegetated exterior, generates the all-important privacy for the private spaces.

Formally, the house is configured with a single rectangular roof that protects from the weather and a minimum set of walls and service blocks that partially contain and configure the spatial sequence. This is a simple house with a strong vocation to interact with the outside in which spaces are designed with a strong sense of place taking advantage of the tropical setting, landscape and climate. 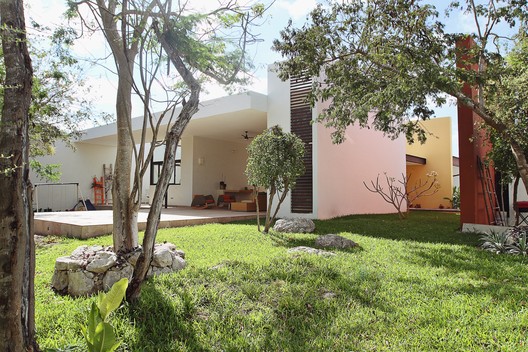