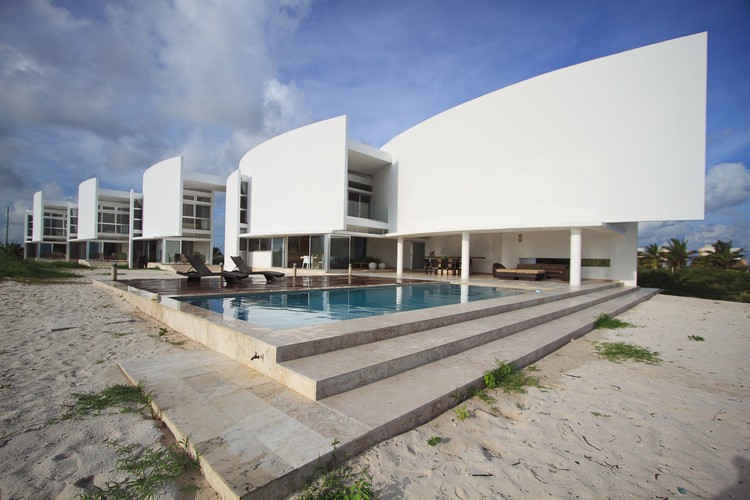 Text description provided by the architects. The clients, a couple with four daughters, wished to have a beach house for all of them, in a 23 meter beach-front lot. Their original idea was to have a seafront main house and three adjoining bungalows in back, so in this approach, only the main house would have frontal views to the ocean, and the bungalows wouldn’t. This is especially important taking in regard that even if today no next-door neighbors have built their beach houses, it could happen in any time in the near future. The program required four social areas with their respective services and 10 bedrooms (4 in the main house and two per bungalow). In addition there was a requirement of a shared service and support area.

The extensive program and rich natural environment were the main motivations of the design analysis process. Our efforts were applied to one main initial task which was unforeseen by our clients and in a way quite ambitious: Giving each house a frontal direct view to the sea, taking in regard that only diagonal views to the ocean would not cut it, as the neighbors could build in the future and the ocean views would be compromised. Following this ideal, we took the challenge of designing in order that each bedroom and social area could enjoy an ocean view, considering even the future potential surrounding constructions. Accomplishing diagonal views to the sea through the now uninhabited side lots were not that complex in terms of design, but as the views would probably be obstructed by future buildings, we engaged in the much more complicated design task of resolving all views thru our clients lot directly to the sea.

The work was begun by arranging each house through an imaginary Northwest to Southeast axis in such a way as every house had at least some ocean view and taking advantage of the prevailing winds. In this system, each house was required to overlap a portion of its program with the house immediately in front of it, so that part of the façade would be confronted by the back-side of the house in front. Using conventionally orthogonal volumes, the view to the ocean would be met with a very aggressive wall, perpendicular to the main axis view.

From that point we followed the idea of working with very fluid curved lines on the eastern extension of each house, so the views from each social area and bedroom would slide gently towards the ocean… spatial fluidity towards the ocean was maximized be this approach. Each main bedroom has a major front to the sea, and the overlapping between curves generates visuals for the other rooms.

On the west side, curves were also designed to gently lead to porches/terraces facing the sea that serve as access to each bungalow. The access to the main house is placed at the end of a very clear visual axis in the exterior layout. These terraces also serve as wind tunnels that generate freshness to the main social area of each house. Smaller curves and concrete slabs are placed at different heights to redirect and take advantage of air currents so every interior space has a natural wind flow which is very convenient of course in the tropics. Also the curves were designed to provide privacy between social areas.

The formal language has generated several interpretations among the local community regarding the contextual elements that may have inspired the design from the beginning (waves, sails, shells, dunes, boats)…  The truth is that the origin of the curvilinear design was the result of an extensive spatial and visual analysis towards the sea. Of course during the design process the similarities with contextual elements were acknowledged and exploded to relate the project to its surroundings. 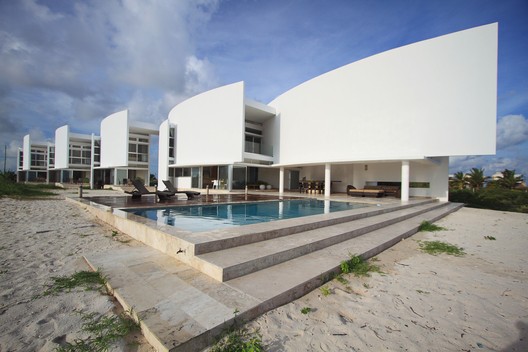