Text description provided by the architects. The Campo Viejo Winery lies on a plateau on the River Ebro valley, the Rad de Santa Cruz, which is covered by 37 hectares of undulating vineyards with marvellous views in all directions. The programme is split into two parts, which means that the visiting area is located on the vineyard, château-like, whereas the winery, which covers a surface area of 45,000 m², cannot conceivably be sited on the hill, but is built into it, like a work of land art, and is concealed from the vineyard.

The efficacy and rationality called for in modern facilities need not be at odds with the age-old use of building wineries underground. Quite the opposite, as doing so helps, in a natural way, to achieve the right conditions for the making and aging of wine: the grape enters by gravity, with serenity, darkness, stable temperature and humidity, paused and natural ventilation. Burying the building also makes it easier to approach, using modern methods, the architectural experience of traditional wineries: dark, serene spaces, greatly marked by the form and texture of the walls and the scant penetration of light from outside. It is the cave, the natural light that slips through the crack, the indirect and tenuous artificial light, the great vacuum after a narrow passage, a glimpse of the scenery at the end of the tunnel, those spatial sensations that we all have in our memory.

Located at the edge of the plateau, the buried construction peeps out for some air and light,  configuring the profile of the hill, timidly merging with the landscape. The earthy concrete facades, red like parts of the layers that appeared with the digging, are stacked up in horizontal strata, disproportionate in scale and tectonically intense, whereby the ensemble seems to fade into the land, as if it had always been there, uncovered by the erosion which brought about the emergence of the reddish rock at the front, towards the river of the nearby Mount Cantabria. These earthy faces run on towards the inside of the winery, forming firstly the entrance yard, which, as tradition would have, polarises all the accesses to the winery, and then on to the gallery, the cave, which articulates the building, and whose hollows lead out to the different spaces.

The buried winery consists of two volumes of two floors, the Making and Storage Tanks Area, 15,000 m², between 12 and 16 m high, and a second rectangular space of 12,000 m² which houses the Cask Aging area, on the lower floor, 7 m high. Then there is the Bottle Aging, Packaging and Warehouse areas on the top floor, 6.5 m high. These spaces feature common qualities: a well-ordered, modulated structure to leverage space and afford greater versatility, natural crossed ventilation and control of the relevant constants. The smoke-grey walls and ceilings, and the indirect light which nuances the structure, provide the serene and tranquil ambience the wine needs.

The Reception and Office buildings are accessed separately by a rural path across the vineyard. These installations, which span 1,000 m², are located close to each other at the far northwest end of the hill, at the top of the latter, with magnificent views. The two clear volumes of stone and wood, with few, albeit deliberate, spaces screening the landscape, look like a vineyard protector and a country house at the same time. They protect the areas inside on harsh days, and run on to the vineyards on terraces covered by canopies to enjoy the good days.

The visit to the winery starts at the Reception building, along a winding path, and culminates at the Cask Aging Area, a large vacuum, flanked by the Bottle Aging room, which can be crossed by a catwalk which winds down to the barrels, leading up again to a terrace that looks out over the landscape. 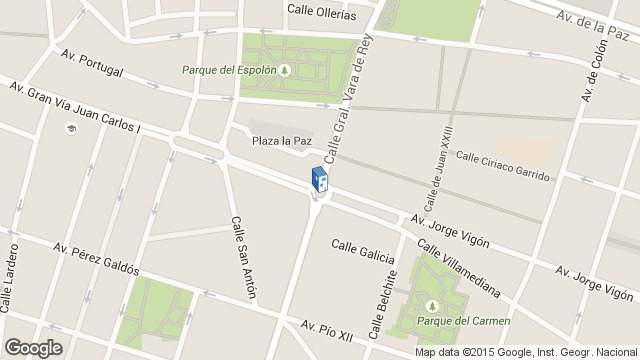 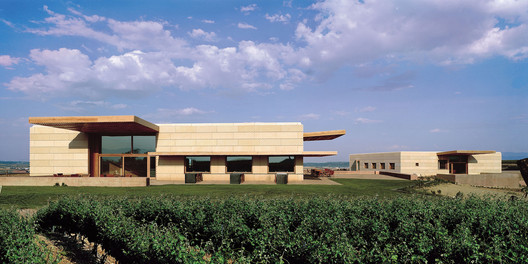