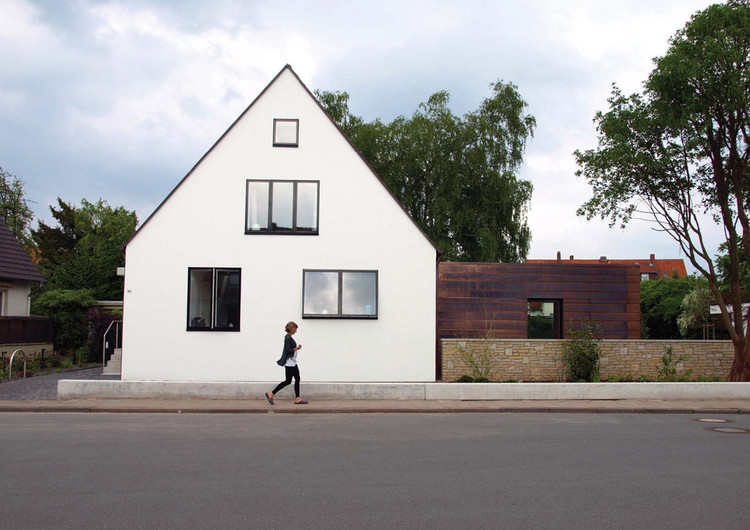 “Dear friends, we moved and are now located in paradise. Of course we can still be reached here and are looking forward to your calls and visits.”

When I received this circular email from the client in May 2009, I knew it was completed! After 1 1/2 years of planning and construction my first project was built. The client, a married couple, had bought a site with an existing two-story, detached “Siedlungshaus” built in 1957, very common in Germany. Its location in a neighbourhood right next to the city centre, a beautiful old birch tree as well as the opportunity to purchase the adjacent unbuilt plot were unbeatable qualities.

It all started with a wish list. For the husband the new house had to be modern. It should have generous openings and exterior spaces that connect to the garden. He was fascinated by the extraordinary use of materials and good details, which show high quality craftsmanship. The wife aspired for comfort and cosiness; it should be a “feel good-house”. She envisioned her new home fi rst of all as an interior space, as protection from the outside world. The house should look discreet and typical with a pitched roof and radiate domesticity at first glance. These were quite conflicting qualities to resolve in a single cohesive piece of architecture.

We saw potential in the small rundown “Siedlungshaus”, decided to renovate it and take it as an opportunity to create an innovative contrasting addition. The new 110m2 extension is conceived as a simple volume that embraces the old. Wrapped around the old building, it generates a courtyard typology with a covered terrace, which generously opens up to the garden and towards the sun.

A variety of spatial configurations, fluent transitions from inside to outside and unexpected vistas make the house appear open and interesting, yet not transparent.

The orientation of the addition subdivides the large garden into manifold domains. Together with the private backside of the building the old beech hedge forms an intimate “Secret Garden”, which is dominated by the giant birch tree. Towards the street between the new garage and the extension a paved open yard is created for gardening work.

The materiality of the extension is crucial for the contrast of the Old and New to be expressed.

The white simple look of the existing house forms a strong contrast to the striking copper cladding of the extension. Horizontal panels in several different widths enclose the new addition with its white plastered courtyard like a protective coil. The copper glows in warm lively colours, which change continuously with the weather and the years.

After the renovation the old “Siedlungshaus” is barely recognizable but still it remains an integrative part of the surrounding neighbourhood. Reduced to its fine proportions and its simple volume it now shines in clear white and refreshingly stands out in order to coexist next to its modern addition. Without its former roof overhang the plain volume of the existing house steps into the foreground. The roof edge is shaped by a folded copper strip, which is flush-mounted with the white plastered walls. This clarity is further emphasized by flush-mounted windows with slim black wood-aluminium frames.

The white plaster and the copper form a contrasting yet appealing alliance, that leaves Old and New as distinct equal parts of the whole. Towards the street a low exposed concrete wall and an offset natural stone wall mark the edge of the site and bind Old and New into one unity.

The existing building with a living area of 75m2 on ground level was completely gutted in favour of more ample and clear spatial proportions.

The entrance is situated at its original location, however, now an exposed concrete element leads up four steps to the door. The entrance hall, guest toilet and study as well as the kitchen and dining area are located on the ground floor of the old house. The dining area was converted into a generous double-height space that catches the sunlight through two skylights. At the cost of one room on the upper floor a whole concrete ceiling panel was removed.

The living room in the new part of the house features a cabinet wall that offers storage space, while a linoleum-lined niche serves as a window seat. On the opposite site a large sliding door connects the living room to the inner courtyard.

The courtyard is the biggest “room” of the whole house. Its layout allows for direct sunlight as well as shade at any time of the day. Part of the terrace is covered; two large openings frame the views into the garden, while a neatly positioned exposed concrete wall offers protection against too much transparency.

Three small rooms in the back of the old house were combined and became the new study. From here you can reach the private spaces of the extension, which are hidden behind the existing house. A large window in the bedroom opens up to the Secret Garden, while the dressing room connects to the inner courtyard. The upper floor of the old house was completely refurbished and now contains a guestroom with small bath as well as a yoga room with access to the attic.

The renovated “Siedlungshaus” features a stark black-and-white-contrast as a reference to the 1950s.

The floors are covered with large-format black tiles, all walls are white. The old staircase remains and was enriched by a curved built-up railing. All windows have hidden frames and deep sills. A bright yellow sliding door, red linoleum, as well as the guest toilet with its orange epoxy basin and antique stone ware tiles are colour spots, that form a fresh contrast to the simple white built-in furniture. Unlike the old house the new addition is made up out of warm natural colours; the oiled oak parquet connects the interior spaces to the courtyard and the garden.

As the existing building was in its original state of 1957, we opted for a gut renovation of the building envelope and its services, in order to make it energy efficient and sustainable.

The exterior walls were covered in a composite heat insulation system out of mineral fibreboards, and all openings were fitted with new high-standard wood-aluminium windows. The old roof structure was saved but the rafters were doubled-up in order to gain more space for a thick insulation layer. The old dormer was replaced by a new one; insulated and clad in copper. The ceiling of the cellar was subsequently outfitted with insulating boards. The extension has a back-ventilated facade with 14cm of mineral wool insulation and highly-insulating aluminium windows.

These features classify the project with annual heating energy requirements of 74 kWh/m2a as a low-energy house. The whole house is equipped with radiant floor heating; a geothermal heat pump supplies the energy.

Furthermore the extension has a green roof; the rain water is collected in a cistern and is reused.

Haus+ negotiates between the opposite architectural aspirations of the clients by forming an interesting contrast between Old and New with its unique, yet strangely familiar form generated by the light-hearted sensitivity to materiality and sense of place. 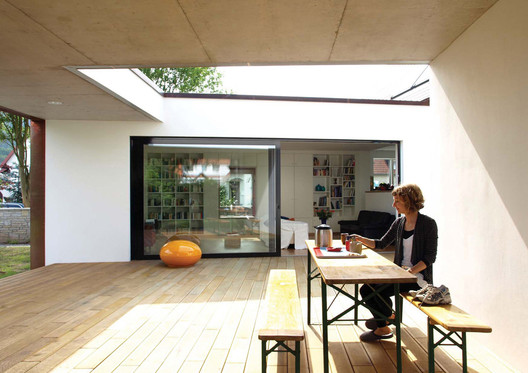 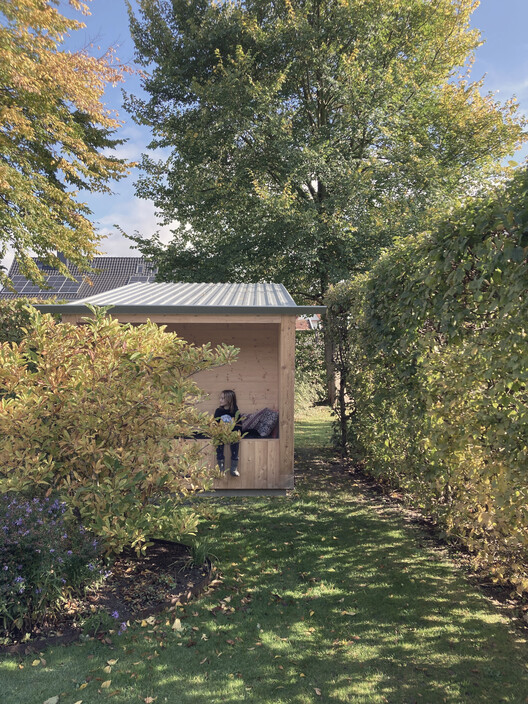 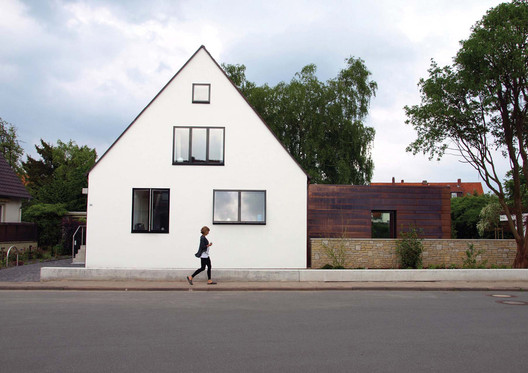