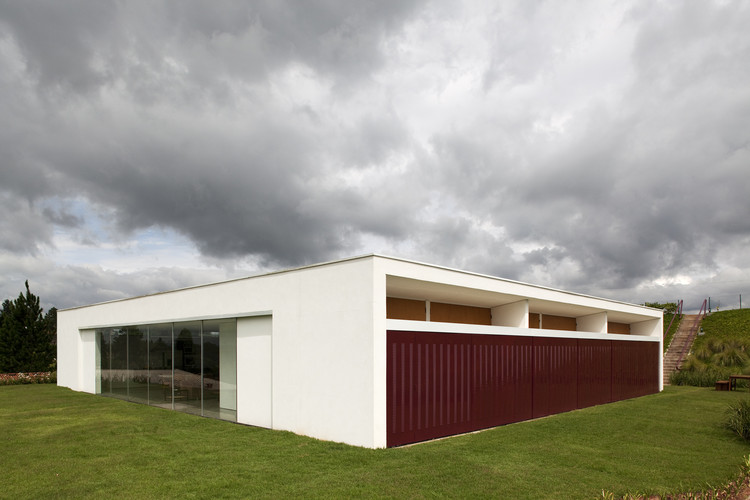 Text description provided by the architects. The São Roque residence was designed based on two constraints: it should take full advantage of the southern view of the lot with an average slope of twenty percent, and be a single-floor dwelling. As a site for the house and the immediate yard, a thirty by thirty meter area was leveled to a height of three meters below the highest point of the lot, based on a calculation of equal amounts of excavation and landfill, using retaining walls reinforced with geo-grids.

It was determined that all the elements of the residence – yard, floor, and water – should all be situated on this same level. The structure is based on a module of two pillars set twelve meters apart that support a beam ninety centimeters high at the center but tapering to twenty centimeters at both ends, which are each cantilevered to a length of four meters beyond the pillars. Four lines of these beams running in the east/west direction at intervals of six meters support the roof made of pre-cast concrete slabs.

The house is organized in five functional blocks running longitudinally in the north/south direction, that is, transversal to the structure. From east to west: the block containing the bedrooms and TV room; the plumbing block with the bathrooms; the social block consisting of the living and dining room, pool and veranda; the kitchen and barbecue block, characterized by a very long counter; and, finally, at the extreme west, the service block, consisting of a pantry, storeroom, pool-equipment room, laundry room and sauna.

The design is developed around an exterior central hub. Thus, the set made up of the pool and spa divides the social block into two identical spaces: the veranda and the living/dining room area. A sliding wooden door measuring six meters wide by two meters and seventy centimeters high runs along the kitchen/barbecue block equipped with the long counter (which, supported on two pillars and cantilevered on the ends, mimics the house’s basic structural module) and can be used to either divide, or not, the kitchen from the dining room, the kitchen from the pool, or the barbecue area from the veranda. 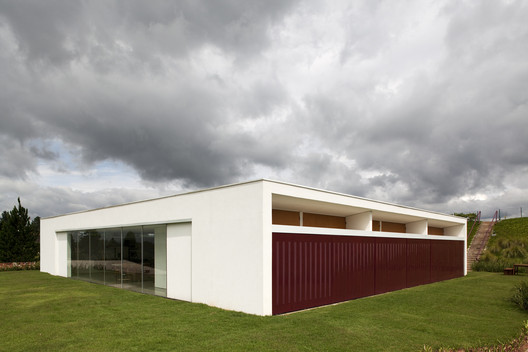