Save
House of January / Studio-Gaon 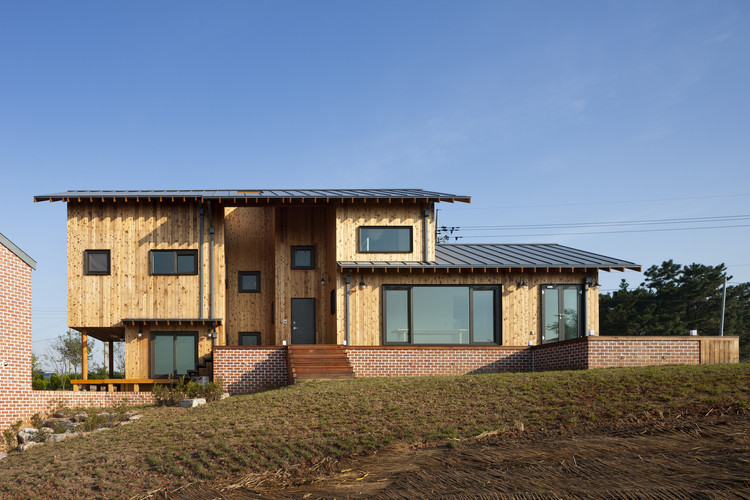 Text description provided by the architects. The house sits in a village called Banwall on the outskirts of Jeonju, one of the most calm and beautiful city of Korea. With a pine forest on north and an orchard on south, what is most peculiar about the site is on the west, shouldering to a graveyard for some family clan. This graveyard also defines the outer boundary of the village. The village name Banwall (meaning Half-moon) is also profound, signifying the moment of when the distinction between moon waning and waxing becomes blur. Remote over the village on the east, is the stadium where FIFA Worldcup game was held 11 years ago. Turning to the far south-east, ‘Moak mountain’ (meaning a huge mountain) is visible to the naked eye.

The house had to be erected on several crossings of demarcation; between the dead and living; between various levels of ground; between old job and new beginning for the client... Designing the house was like making a gate that transcends the boundaries. We hoped the house would embrace a peaceful and unrestricted life like a character in a forgotten story book.

The house posits naturally according to the slow slope from south to east. Split in two, one with wooden exterior incorporates domestic life, whereas the other finished in red brick encompasses recreation and repose of the user couple. One faces due south, the other turns itself a little to the east, properly facing the far mountain. The two departs in the middle to leave space for a Madang that has no definite shape of its own.

This Madang, the in-between space, works both as a buffer and also as an active division simultaneously. But it is in essence an empty space, hiding its existence. More relations will be encouraged as time passes and lessen conflicts at the same time. It is a space that has meaning only because it is not filled. The ‘Maru’ (Korean terrace) that faces this Madang is a distinctive Korean spatial element that is neither inside or outside. Or rather it is a demarcation between interior and exterior.

We have come to call this house

A Korean poet once cried, “On each and every boundary, the flowers abound generously.” With a nearby apple orchard that symbolizes harvest, sitting between the place of the living and of dead, we hope the house will act as a venue where the boundaries meet and interact, like a time in January. 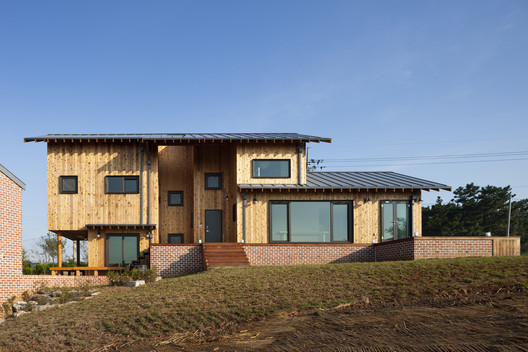