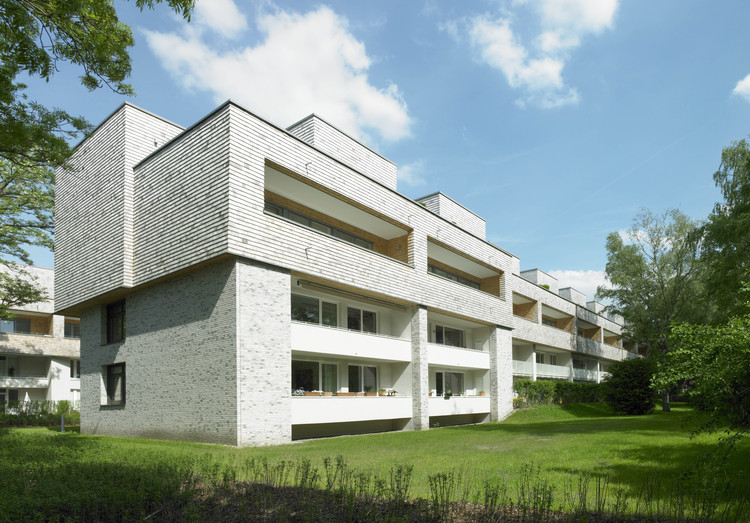 Text description provided by the architects. The task was to densify a residential district dating from the 1950s – which is attrac-tively located at the edge of the city – in a contemporary way and to rehabilitate the existing housing stock without masking its origins or historic character, at the same time updating the energy infrastructure.

Opted for in order to retain the open character of the settlement was the addition of upper stories, a new development which heightened the existing structures. The design parameters for the project entailed updating the energy infrastructure in a way consistent with the settlement’s existing constructive and architectonic character, while at the same time satisfying requirements for sustainable building in the additional stories.

The decision for the addition of new upper stories by means of lightweight construc-tion in prefabricated timber paneling also featured the advantage of a relatively com-pressed construction schedule, and hence minimal noise and disturbance for residents of the existing units.

All of the wall panels and ceiling elements of the new wooden stories were prefabricated at the factory (including mineral wool insulation) and assembled on location.

The objective of the façade renovation was to upgrade the existing structures for the sake of long-term rental possibilities, and to support the building culture of northern Germany: the existing façades were given an external layer of insulation and clad in a new layer of exposed brickwork – a Danish thin format as before, albeit now in a dif-ferent tone. In its variegated shadowing, the clinker brick brings out the natural char-acter of the clay material.

The original estate, with its seemingly artificial yellow clinker and turquoise tiling as balcony cladding, was replaced by hand-molded brickwork featuring a rather archaic materiality. Used as a building material for the façades of the upper stories was wood, in the form of rough, split cedar shingles whose finish features qualities of natural variation. In this way, the lightweight character of the new construction is visible externally; the new stories are set off distinctly from the massive existing structures below, at the same time echoing the surrounding stands of trees in their materiality (treehouses).

The majority of the altogether 47 new units are configured as maisonette types. In keeping with the treehouse concept, all of the apartments enjoy spacious roof terraces, and the maisonette apartments have loggias as well. In terms of configuration and dimensions, the plans of the new apartments are de-signed to be especially family-friendly, a measure designed to attract younger tenants in the future. In general, the planning measures pursued the objective of doubling the estate’s overall usable area while at the same time halving CO2 emissions. 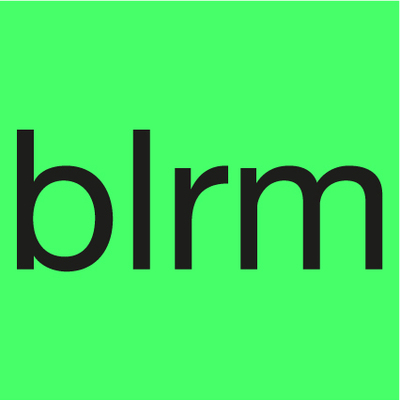 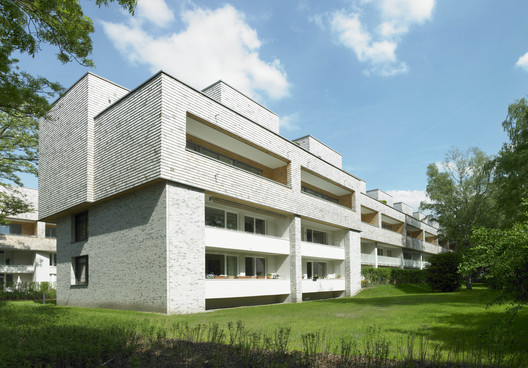