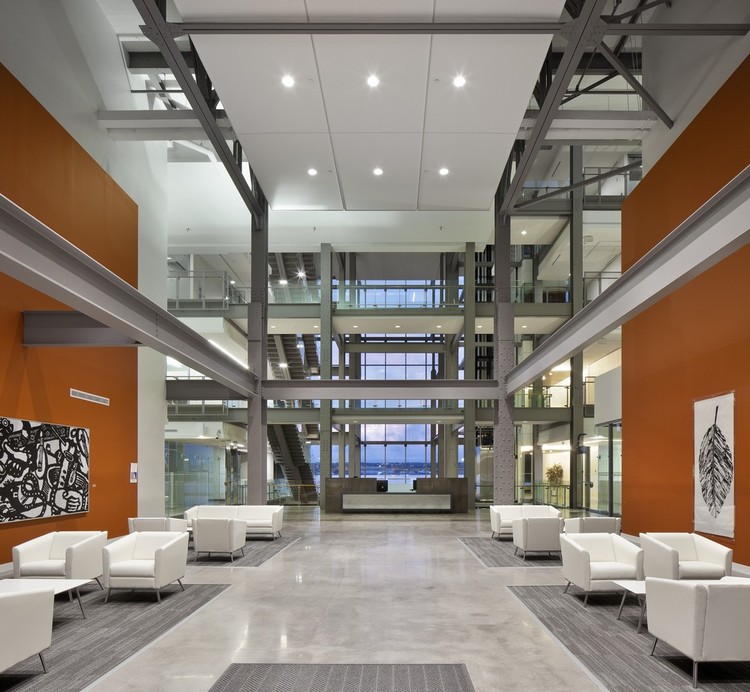 Text description provided by the architects. The project is located on a 5-acre site at the southern end of the Halifax downtown waterfront with access from Lower Water Street. The site steps down approximately 7.5m from Lower Water Street to the harbour, east of the site. To the south there has been significant redevelopment of some of existing harbour buildings including the NASCAT, and Pier 21. To the north and west vacant lots exist that will be subject to future development.

An existing decommissioned power plant currently occupies the majority of the site; the Water Street Coal Fired Generating Station began with the installation of its first generator in 1911. Construction of the current building took place progressively with a series of modules beginning with the northerly most one in 1944 and finishing at the south end of the site in 1959. The plant operated from 1944 to 1986 and was finally decommissioned in 1999. The existing building is comprised of a concrete clad steel structure that encloses several high volume spaces that originally housed equipment for generating electricity. The site contains a substation with switchgear and transformers that serve downtown Halifax. A tower supports transmission lines that feed the substation.

The project involves the retention and adaptive reuse of the former generating plant to become the headquarters for the provincial electrical utility, Nova Scotia Power Inc. (NSPI). The facility will house over 500 staff in approximately 18,000 gross m2 and provide onsite parking for 150 cars.

Public Access
From an entry court on Lower Water Street, visitors will cross a bridge to the main entrance and lobby of the building. There are three public entries from the boardwalk level.

Early visits to the site were inspirational: soaring interior spaces with an exposed latticework of steel framework were reminiscent of the imagery of Russian Deconstructivism design. Investigation of archival photos of the site uncovered the image of a line of 4 chimney stacks. The design retains a memory of, and celebrates, the original structure. The free-standing structure in the Atrium frames interesting views to the waterfront. Transparent stairs and bridges that thread their way through the structure provide connectivity within the building. The memory of the chimneys is recalled in the Galleria - their bases becoming skylights. Interior finishes recall an industrial aesthetic – the polished concrete floor in the atrium and expanded metal mesh on the balustrades.

On the exterior, the new envelope is expressed as a layer applied, and floating out from the original volume.

Connecting the City to the harbour
The existing building is a barrier to the waterfront. Over 36m in height, the large concrete mass with no openings prevents any visual connection between the City to the west and the waterfront between Morris Street and Marginal Road. A large transparent volume carved through the mass of the existing building, the Atrium, will form not only the main entrance to the building on Lower Water Street, but will provide a visual link through the building so that the water will be visible from the street.

The building and site design reinforce the visual and pedestrian connections from city streets to the water. A portion of the existing structure at the north was demolished to allow a connection from Morris Street to the harbour. On the south the beginning of the boardwalk is reinforced at the termination of a view and pedestrian corridor from Perimeter Road.

Sustainability
As the provincial power authority, NSPI wishes to demonstrate environmental responsibility and show leadership in energy conservation. The unique adaptive reuse of the building will be a visible statement of the corporation’s commitment to sustainability. The stated objective for the project is to achieve Gold Level LEED certification as a minimum, with a target of Platinum Level certification, subject to a detailed analysis of cost and feasibility. Sea water cooling (and heating) is being provided utilizing existing piping from the Halifax harbour originally used to cool power generating turbines. The building will represent the first major use of “chilled beam” technology in Canada. Located within the ceiling space, the system, more efficient than conventional systems, utilizes (low energy sea) water rather than air to transport cooling thereby lowering energy consumption.

Additional energy saving strategies include the provision of heat recovery on HVAC, daylight and occupancy sensors for lighting and supplemental heating for both the building and hot water with the use of solar thermal panels.

The “reskinning’ of the existing building shell will result in an energy efficient tight building envelope that will minimize energy loss/gain at the building perimeter.

Most of the demolition residue will be reused: steel will be recycled off site, and the concrete rubble that is saw cut to make window openings will be used as fill to adjust site grades west of the building.

Addressing Program and Client Needs
Accessibility
The project will address the utility company’s desire to be a more accessible organization engaged with the community that it serves. Transparent entries on both the boardwalk and Lower Water Street will invite the public into the facility and give NSPI the opportunity to showcase its environmental stewardship.

Engaging the user with the waterfront
The building design takes advantage of its unique location and maximizes internal building occupants’ exposure to the Halifax harbour. Staff movement through the building is encouraged on routes that have a view to the water - including travel up and down stairs and elevators located within the Atrium, perimeter circulation paths, or stairs located on the exterior for interfloor traffic. Viewing balconies on the waterside are located adjacent to the Atrium so that users can step out and breathe the sea air.

Sense of collegiality
A sense of collegiality is encouraged in general as a result of the openness of views between floors from either the Atrium or Galleria. Within the Atrium, the open stair, the adjacent oases areas on each floor, and glass elevators all located on edge of the Atrium animate this central space making it the heart of the facility and the focus of activities within the building. The Galleria is the main route of internal horizontal travel – the building’s central circulation spine. In the winter, when the harbour environment is harsh, the Atrium becomes a key employee amenity for lounging, meeting or having lunch.

Objectives for the Project
In 2011 Nova Scotia Power Inc. intends to move its corporate offices from the current leased facility to a renovated power plant facility presently owned by the Company.

Cost was a major component on the decision to renovate the former Water Street Coal Fired Generation Station and relocate the employees of the NSPI’s head office groups to this site. Renovating an existing NSPI building is the optimal solution to the Company’s post 2010 space requirements. 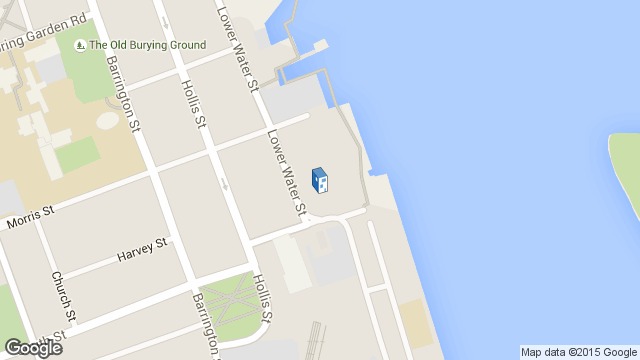 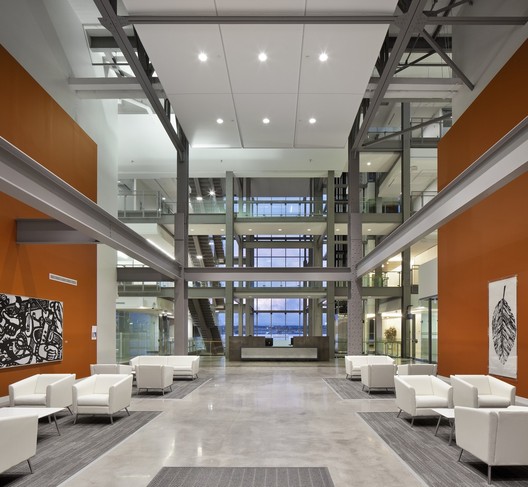