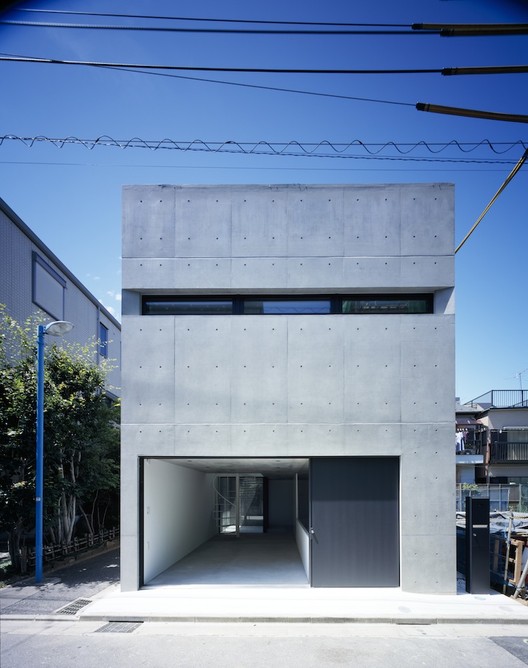 Text description provided by the architects. This downtown residence, which also houses the working spaces of a husband-and-wife designer couple, is located on an extremely small plot measuring just 65sqm. The cockpit-like office area at the entrance to this home is separated from the garage by a single pane of glass. Opening the garage door to its fullest extent creates a sense of unity between the street and the interior, giving rise to a sort of intermediate zone. The area around the small central courtyard located at the far end of the first floor is filled with diffused light pouring down from the upper levels, projecting a sense of tranquil calm in the adjoining master bedroom.

Going up the spiral staircase leads to a children's room for the client's three kids and a large changing room on the second floor. A curtain partitions off the bathroom and utilities. By opening the door to the central courtyard, which is surrounded by concrete walls, the inhabitants can enjoy the sensation of relaxing in an outdoor bath while basking in the light and wind.

On the third floor is the family room, which adjoins the open stairwell. High skylights installed along the walls and on the ceiling make use of the sloping roof, which emerged as a result of the setback limit imposed by the city. A panoramic view of the sky and downtown area is visible from these glass panels, which also allow ample sunlight into the interior. The living room, which features built-in furniture covered in tatami mats, allows the residents to enjoy sitting on the floor, as if they were in a little treehouse. The balcony next to the kitchen will soon be filled with plants, allowing them to enjoy cooking and preparing food in an open, relaxed environment surrounded by greenery. The rooftop garden, which can be accessed through a rooftop structure, is a genuine urban oasis. This small residence, whose interior brims with a sense of openness that cannot be imagined from the relatively closed facade and its few visible openings, is distinctive for its myriad faces and spatial configurations that can be enjoyed as one moves up and down the different levels.