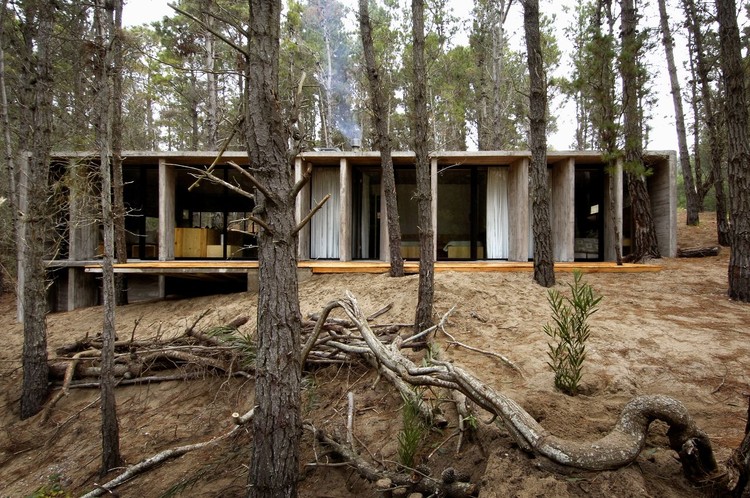 Text description provided by the architects. Mar Azul is a seaside town at 400km south of Buenos Aires, characterized for his large dune beach and his leafy coniferous forest. The owners had chosen a place in the forest with a challenging topography, away from the sea and from the most inhabited areas, to construct a cottage without loosing the important presence of the landscape.

The experience of a constructed house in the same landscape (Mar Azul House), with satisfactory results, allowed us to perform and develop functional and aesthetics-constructed issues in the next project, emphasizing the performance of the selected system and solving the location in the complex topography. At the moment of choosing the construction alternatives we focus on a low budget, a reduced impact in the landscape, minimum or none posterior maintenance and a short time of construction. According to these parameters, the house was solved like a concrete prism of extended proportions and minimum height. It is located on a flat surface in a field that has a strong diagonal slope (a difference of 6m between opposite corners). On this way it is scarcely modified the section of dune and the views are not interrupted from the bordering fields to the broad landscape, so that years later only a floor would be observed (in fact, the ceiling of the house), covered by dry foliage of the pines.

The construction is located parallel to the short side of the field and the slope of the dune is oblique respect to the orthogonal one, the house appears half-buried in one of its angles and with its foundations exposed in the opposite one. Consequently, the pure form that contains the summer activities seems to emerge from the dune with two differentiates façades. The SW façade is sunk in the sand with an opening that appears from the beginning to the end and which height is accompanying the slope of the dune. On the other hand, the NW façade is a curtain wall like a balcony that allows distant views but, at the same time, it is partially protected of the glances from the street by partition walls, that vary theirs position and amount according to the rooms they protect. The glasses reflect the landscape as the house is observed from outside, and they create and emphasize a series of vertical elements of much protagonism (true and reflected trees, true and reflected thin walls), that reduce the importance of the strong horizontal presence of the prism and offer to the observer changing sights while moving.

It is a prototype plan. On the balcony façade one room follows the other, joined by the deck. On the sunken façade, we find the bathrooms and the kitchen, and in the end that goes “unburying itself”, the dining room. The house does not have a main entrance. It is a flexible construction in which we can get in by any of the rooms. The “concrete furniture” defines the dormitories. These ones are 0.70m separated from the curtain wall façade through two permanent windows that can be removed or replaced by doors. With this resource, anywhere in the house can be recompose the entire façade and each room is enlarged because it’s visually prolonged into the next. The place to park the car, the barbecue and the platform to sunbathe and refresh yourself and all the outdoor activities are determined by the place’s own topography and were not organized by functional reasons. It has also decided not to landscape the lot to maintain the quality of the natural landscape, which also has the advantage of requiring no maintenance other than the removal of pine trees when they dry.

It was decided for this new experience to eliminate the structural iron cross section to take to the limit the concept of null later maintenance. The plan of the house (6.90m x 14m) is a reinforced concrete slab that rest in the partition walls of the main façade. In the opposite side was solved with a jutting out that makes possible an opening in all the extension without intermediate supports. The jutting out is supported by three partitions walls that move of the line of the façade. The inner partition walls are of rendered hollow bricks and painted with white latex. The floor is made of concrete screed cloths divided by plates of aluminum. The joins between walls and floor were solved with an aluminum cross section to the skirting board. The openings are of dark bronze anodizing aluminum. The heating system, since there is no gas service in the zone, was solved with a wood burning stove that acclimatizes the meeting place, the first dormitory and the corridor. The main dormitory and the baths are heated with electrical plates.

Our objective was to let natural light enter to all rooms, incorporating a light entrance above the concrete furniture that contains the wood burning stove. According to that objective, a slice was projected on the ceiling creating multiple luminance effects in the walls and also in the floor that vary along the day. The same happens to the shadows of the thin walls from the façade. The protection of light and visual from outside was solved by blackout curtains.

It was specially designed for this house, made by recovered Canadian pines wood from motor boxes packing. The table is a concrete slab joined to exterior wall.