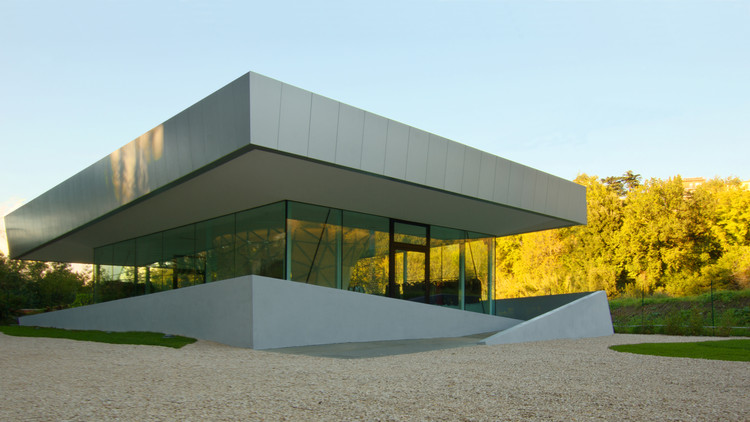 Text description provided by the architects. The project area is located near Rome in the Castelli Romani Park. Prior to our intervention, in the project area there was an old shed, abandoned for over 15 years was made of tuff bricks and it had a roof in Eternit. Before starting the construction of the new building was necessary to proceed with the work of land reclamation. In this way we were sure to realized a building in a safe place. The request was to create the new office / showroom for their company, who works as a consultant (style and production) for companies in the fashion industry. The image desired by the client for this project was to have a structure that reflects their dynamic work manner and at the same time have a space where the interior is visible from the outside, just like a shop.

The dynamic has been made on the outside of the building by cutting the "sheets" of the sloping roof and at the same time in the base with others two parallel planes inclined. Inside has been configured a Geodesic structure that connects and holds in tension the two "sheets "opposed. The geodesic is self-supporting, and it seems to have crystallized in the current position. Its materiality is also dynamic as during the day seems a stone opaque and harsh. In the evening instead it showing the internal structure triangular :  immaterial shape and light. This structure consists of 144 wooden triangles, the cut it was made through 5-axis CNC machines and covered with thin panels of solid surface (3mm)  that would guarantee the translucency when backlit. The concept of shop has been accomplished through the use of laminated glass without vertical frame, on all sides of the showroom. This has resulted in a visual continuity among inside and outside and between architecture and natural surroundings.

The desire to have the building fully glazed has created several issues regarding the energy performance of the building in winter and summer seasons. However  the spatial conformation of the building and the choice of materials has also been studied from the viewpoint of environmental and economic sustainability. This process was implemented through the use of parametric software BIM (Building Information Modeling) and calculation of dynamic energy, thus having an early stage of development of the project, all data relating to the economic and energy consumption of the building.

The showroom floor was raised above the ground so as to create a space ventilated to dispose of dampness and the Radon gas present in the soil of volcanic origin. For the windows have been used a triple laminated glass with argon interspace in order to have a better transmittance. The shape of the roof, covered with aluminum panels, was designed by studying the path of the sun during the days of the summer solstice and winter. In summer the glass walls during the hottest hours and until late afternoon are "shadow" reducing most of the greenhouse effect.  Also have been included of the vasistas windows (with timed opening) above the entrance doors to take advantage of passive cooling at night. In winter, the sun being lower on the horizon through the glass wall and warm the floor that it having a high heat capacity acts as a thermal flywheel. For most of the day is guaranteed a high percentage of light natural factor which allows a considerable saving on the consumption of the artificial lighting and at the same time improves the color quality (essential for the type of activities performed by the company) and to minimize visual stress of workers.

Finally, as regards the plant, the building is equipped with a heat pump (air-to-water) for heating-cooling, that  using renewable energy source such as air. This one combined with the system of photovoltaic panels mounted on the roof makes the building almost self-sufficient the office. The land has been designed to include circular domes of grass, while the floor is made of gravel to allow proper drainage of rainwater and minimize the effect of "heat island" in summer. 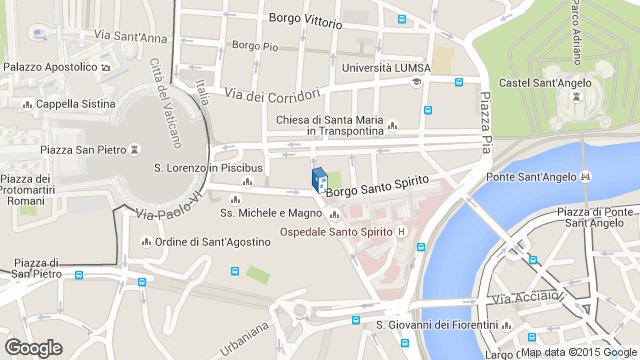