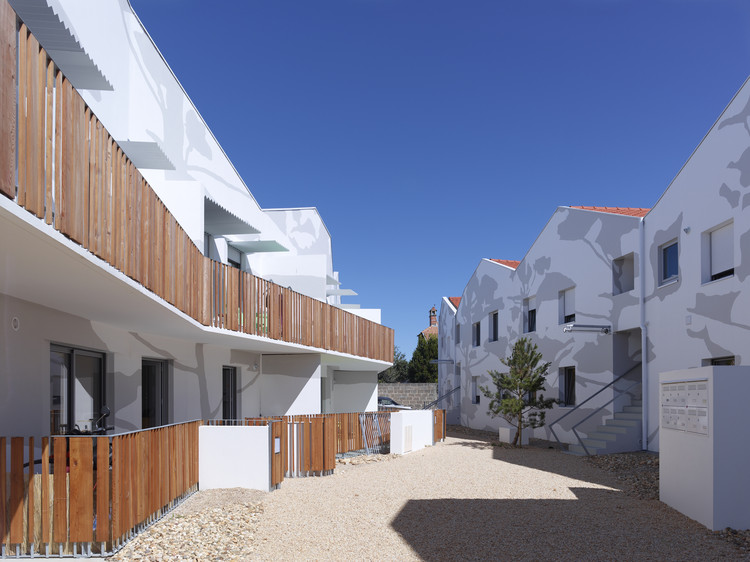 Text description provided by the architects. In Saint-Gilles Croix de Vie, a well known  Atlantic port, Tetrarc is undertaking a social housing project with Vendée overtones,  Mervau. After having reviewed the housing site (Arborea), its classification (Playtime) and its services (Boreal), and its construction using the wood option (Rosa Park), Tetrarc is giving its views here on the gradual renovation at the heart of small and medium sized towns.

In order to demonstrate that an urban renovation can be fused with the existing structure rather than traumatising it, Tetrarc is seizing the opportunity for a consultation with Vendée Habitat: the regional social housing office is planning to tear down roughly ten dilapidated small  houses dating from the 1960s erected on a site measuring 3,553 m2 in order to build 36 comfortable housing units to be occupied by more than one hundred people. Instead of  erecting horizontal or vertical structures at odds with a sensitive urban environment, Tetrarc is proposing to establish a hamlet there in order to ensure urban continuity whilst giving occupancy of the plot of land to 101 housing units/ha and forming a strong interiority beneficial to the development of social interaction between residents.

Nothing picturesque here: Tetrarc  is adapting this tried and trusted urban design to a current form. They are revisiting the constructed continuities, the frequently used measurements, the continually changing points of view created by the reorientation of a façade or the slope of a roof, within the context of the greater visual homogeneity and a white coloured commonality. The series of households are set along alleyways of varying lengths, along lanes, passages and small courtyards, creating a visually welcoming and physically porous urban space accessible to all the population. This approach requires that a careful response be given to each urban micro context: this will avoid any  mass effect by favouring a perpendicular settlement; this will provide a visual vista on a street by opening  up an alley along its line; thereby retaining the peaceful nature of residents’ houses by placing access to the parking areas in a buffer between the gardens and the new hamlet; another street will be changed by introducing an urban settlement on it created by at least six adjoining town houses...

This arrangement has the added advantage of aligning housing with public space to the palpable diversity of collective spaces. Because of this it offers the residents the opportunity of having social facilities: children’s playground facilities, neighbourhood contact, shared public festivities… all elements of a socially active population. This use leads to the quality in the use of shared spaces being comparable to the use of the access spaces to the housing and their external extensions which have a very direct participation in the quality and use value of the locations. Separating boundaries, the enclosure of small gardens, house doorways, handrails, ramps and balustrades are designed with exceptional care. Letter boxes and electricity meters are fitted into the scheme with extreme care.  The sun shading equipment is in the form of playful vernacular designs. The walls and boundaries between the housing appear as cast shadows, an allusion to the pine trees in the Vendée forests, heightening the hamlet’s seaside resort atmosphere.

With its homogenous forms the hamlet combines several types of housing in order to meet the big demand for diversity of residents: houses T2, T3 and T4, simplex garden apartments; houses T2, T3 and T4 upstairs simplex, duplex town houses. Tetrarc is paying particular attention to the quality of everyday use. Accordingly the garden apartments are extended by a space screening the views from the alley and offering a south facing living room.  The upstairs apartments are served, two on each side, by an independent staircase directly connected to the alley. They have some external space in the form of a large balcony with room for table and chairs. The town houses have a ground floor entry, a living room and kitchen both opening onto a small planted courtyard, A bathroom, a water feature and a bedroom; the other bedrooms are upstairs. These varied types of housing have the common features relevant to the life style of today’s families: the open plan living room/kitchen is big enough to fit different types of furniture. In the bedrooms the bed can be positioned in at least two (and often three) different places. Similar consideration has also been given to the collective areas.  Along the alleys the areas opposite the buildings have been organised into night-time spaces and day-time spaces, which diversifies the architecture between the two façades and reconciles usage by avoiding the conflicts linked to noise nuisance. In the same way, to protect the housing from the noise arising from car parking access, rubbish bin areas, maintenance areas,  the housekeeping areas and meters have been placed in an enclosed section on the western gables.

The response to environmental requirements and the optimisation of the operational energy use are, for example, directly evident in the architectural devices: in order to intensify the harnessing of free energy the installation of fabricated straps has been precisely calculated in order to optimise their absorption of sunlight, the roofing profiles have been examined with the same objective, which has led to some of them being lowered; a maximum number of living rooms are south facing; the sun shading equipment is fitted with openings located upstairs and the balconies protect those on the lower level.

In this way Mervau is providing high density medium housing which takes into account contemporary life styles and environmental requirements; it is providing quality thanks to the sophisticated streamlining of the construction, and this is integrated into the existing town by giving it a feel of poetic serenity.