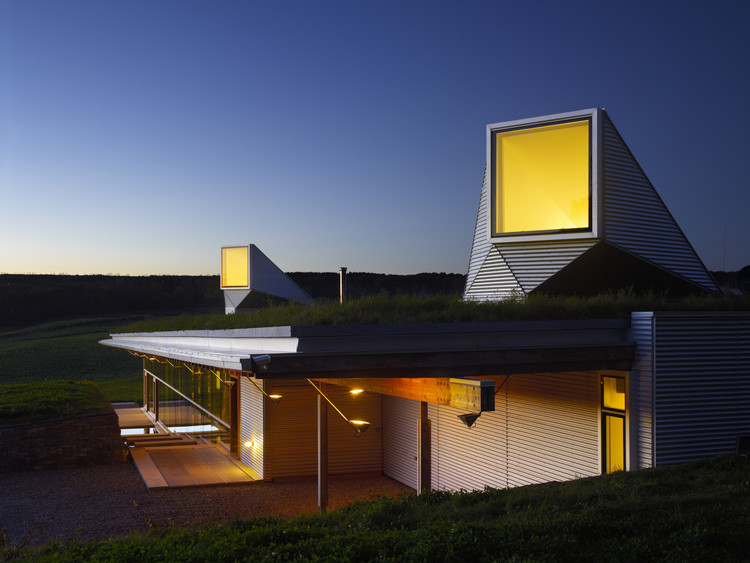 Text description provided by the architects. This retreat for a family of four is located on a 90-acre property of rolling meadow with an historic farmhouse and barn. Our objective was to create a quiet dwelling that preserves a meaningful connection with its landscape and with its historic settlement.

The “obvious” location for the house might have been a hill overlooking the landscape, but the visual presentation from this site would have been overwhelmed by the road and by neighbouring houses. Instead, we built the house into a hill, hugging the land and insulated against Ontario’s heat, wind and snow. Thereby, we have screened out views of the road, exposing instead a meadow that gently rolls towards the existing farm buildings and the landscape beyond.

Our project included a watercourse that uses rainwater collected from the roofs of the new house and the original barn. Water flows alongside the house into the meadow and through a series of brooks and ponds to the barn, establishing a walking path that connects the house with its surroundings and the historic farm buildings. The watercourse merges the house with its landscape, and also provides the meadow with a new ecosystem that has introduced plants, fish and birds to the site —with the added value of being safe for both swimming and drinking.

We have dramatically reduced the physical presence and the environmental impact of the house by submerging it into the landscape and covering it by a roof that is planted with the same grasses as the surrounding meadow. And we have further connected the house with the landscape by using locally sourced, durable materials and by heating and cooling the structure with a water-based geothermal system.

Since the home is very sheltered it might have been dark inside, but light monitors on the roof pull south light right into its centre. During the winter, the low sun shines directly through the monitors’ glazed apertures adding light and warmth. In the summer, the monitors’ forms reflect all but a small proportion of the higher sun, reducing the light and heat entering the building. The monitors are also operable, allowing ventilation and hot air to escape. Because the monitors are indirect, the light they provide is soft and even.

Instead of a distinct separation between interior and exterior, our composition is made up of several intermediary spaces, (such as the space where the watercourse flows between the house and the outer retaining wall) that create a sort of middle ground between the house and the world beyond. These spaces provide intimacy and protection, while still offering a connection with the broader landscape. They also address our physical and psychological needs with the changing seasons and climatic conditions, by providing this civilized transition between inside and out.. The result is a house that feels simultaneously intimate, grand and firmly rooted in its place. 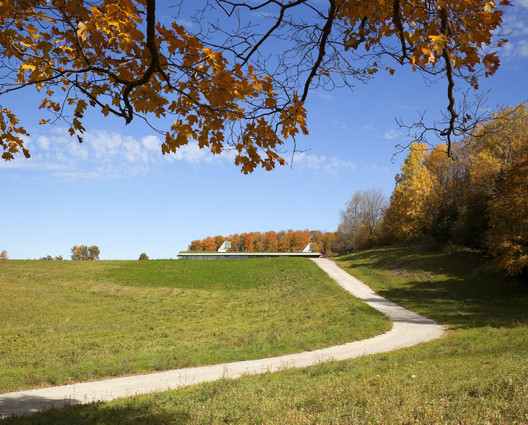