Save
HASSELL, OMA, and Populous To Redevelop Sydney Harbour
Share
Or
Copy

Australian firm HASSELL Studio, OMA and Populous have been announced as the winners for the redevelopment of Sydney’s new convention, exhibition and entertainment precinct (SICEEP) at Darling Harbour.

The 20-hectare, billion (Australian) dollar project, which will stretch from Cockle Bay to Haymarket and Ultimo, will include Australia's largest convention and exhibition facilities, Sydney’s largest red carpet entertainment venue, a hotel complex with up to 900 rooms, and a new urban neighborhood in Haymarket.

More on this project, after the break... 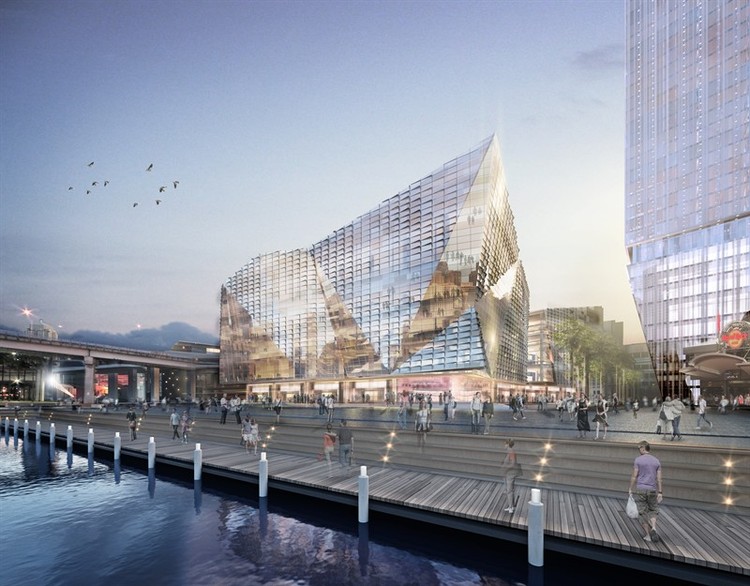 The new facilities – with the working title of Darling Harbour Live – will include: The International Convention Centre Sydney (ICC Sydney) (with flexible convention spaces that can house from 750 to 2,5000 people as well as a ballroom with 2,000 person capacity); The ICC Exhibition Centre (over 35,000 sqm of exhibition space, another 5,000 sqm of internal flexible space, a 5,000 sqm event deck with city views, and a terraced landscape to conceal the loading dock and expand public open space); A red carpet entertainment venue (whose fan-shaped layout will reduce the building footprint and expand open space; it will also have a capacity for 8,000 people); and a hotel complex with up to 900 rooms.

Moreover, the plan includes an additional hectare of open space, including an expanded/renovated Tumbalong Park (which will be re-integrated into Darling Harbour with new connections), a new Boulevard (which will act as the central North-South pedestrian route), and three new public gathering spaces integrated into the city: Harbourside Place, Chinese Garden Square, and Haymarket Square.

According to Australian MP Barry O'Farrell, “The redevelopment goes far beyond improving facilities – it’s also about re-shaping the city. Darling Harbour already attracts 25 million people a year and this development will create a more vibrant place on Sydney Harbour."

Destination Sydney, the consortium of developers who will develop the project, echo the sentiment: “This project will redefine Sydney as a global city and create one of the world’s great meeting and entertainment destinations. Not only will it become a beacon for international visitors for conventions and events but will also build on the appeal of the Darling Harbour area for Sydneysiders creating an entertainment hub that promises to reconnect and re-energise the city.”

Construction will commence on The Haymarket in 2014; the new facilities and public spaces are expected to open in December 2016.