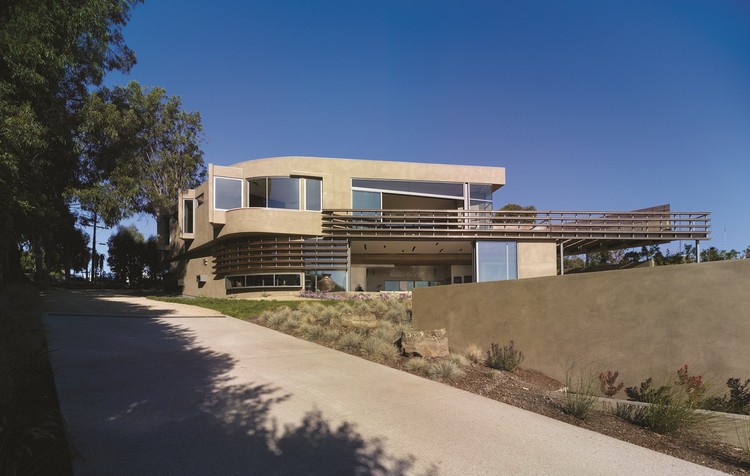 Text description provided by the architects. This house takes the typical paths of domestic movement and manipulates them to weave the exterior landscape and site into the house while enhancing natural airflows and views. An interest in the continuity of landscape, circulation, and the sequential movement through space has lead to an exploration of continuous spatial relationships in this residence. Smooth, sinuous surfaces delineate zones of space while maximizing the site’s topography, views, and circulation. Volumes are differentiated through a slicing of surfaces and materials, emphasizing the horizontal while allowing a multiplicity of spatial conditions to develop through the interaction of these forms, surfaces and volumes.  These spatial intersections accumulate the more static elements of the house, while breaking down edges between inside and outside, allowing a more engaging relationship between the land and internal logics of the house.

On the top of Point Dume in Malibu, the residence is accessed from below by a driveway, while an existing retaining wall bisects the site and moves along the geometry of an existing knoll. The geometric morphologies of the residence frame panoramic views of the ocean, as these views inform the shifts in geometry that produce the “S” shape of the plan. The sinuous sequence from the entry to the living space and landscape beyond echoes the shoreline below, creating a vacillation among multiple viewpoints. Movement in the house bends from the entry to the living area and again towards the pool.

Entry occurs through a gap between the volumes of the garage and the guest bedroom of the house. One descends into a narrow curving vertical hall below two clerestory windows that twists towards the open horizontal living space arriving at a framed panoramic view of the ocean. This fluid hallway becomes the nexus of the residence, where movement between the public and private areas of the home is aggregated and intertwined in the curved hallway space. The path of the house extends through the living area under an eco-resin, custom fabricated, light box and extends to an outdoor terrace that curves around to the lap pool and a new view towards the Santa Monica coastline beyond. The open living area has eleven-foot ceilings where kitchen, dining and living areas have a loft like feel. The living area literally extends to the exterior with two large sliding doors that create an opening to the outside that is eleven foot by twenty-two foot.  An over-scaled system of horizontal louvers extends along this edge of the residence to control light, incorporate library shelving and become the railing system for the master bedroom terrace above.  The master bedroom is shifted back both to create a terrace and to re-orient views of the coastline towards the city lights. 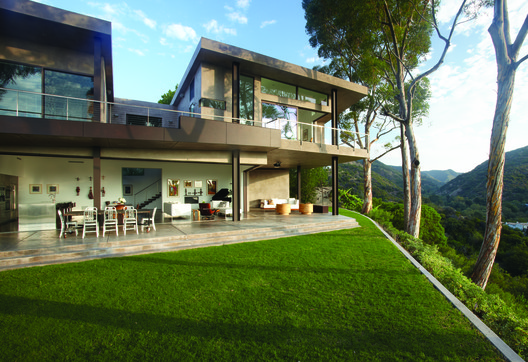 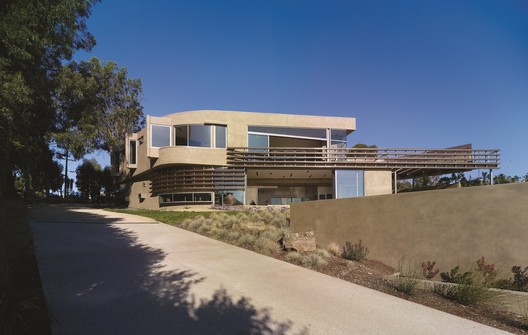