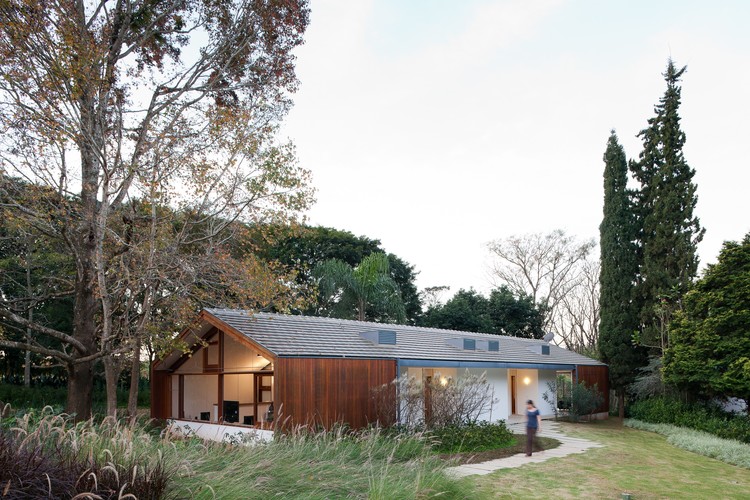 Text description provided by the architects. The building was conceived as an addition to a pre-existing weekend house. The guest house was placed between a maple tree and a cypress, inserted perpendicularly to the main construction. It is situated in the outskirts of São Paulo, inside a residential condo.

The largest tree marks the site´s center and the most vertical one its limit. Preserving the inner garden space, the view from the main house was kept unobstructed. Each program has its own façade and each façade its view. The bedrooms open up to the neighboring golf court, the office faces the lake, circulation leads to the garden, and the living room has the maple tree as backdrop.

The surrounding vegetation plays an important role to the house. Because of it, the house cannot be seen from the street. It protects and shadows the glass pane. And from the inside, the window frames the giant tree.

The central core, with four suites, has a concrete structure. Around it, an independent timber structure delimits gathering places and circulation. The roof trusses are only visible at the edges. Steel cables held by gusset plates attached to the peripheral pillars and over the frames are responsible for keeping them slim.

House circulation is always through the porches and there is no distinction between front and back doors. Inside the building, one can feel the tranquil atmosphere of isolation, even being so close to the neighbors. It is just like being in a tree house without leaving the ground.