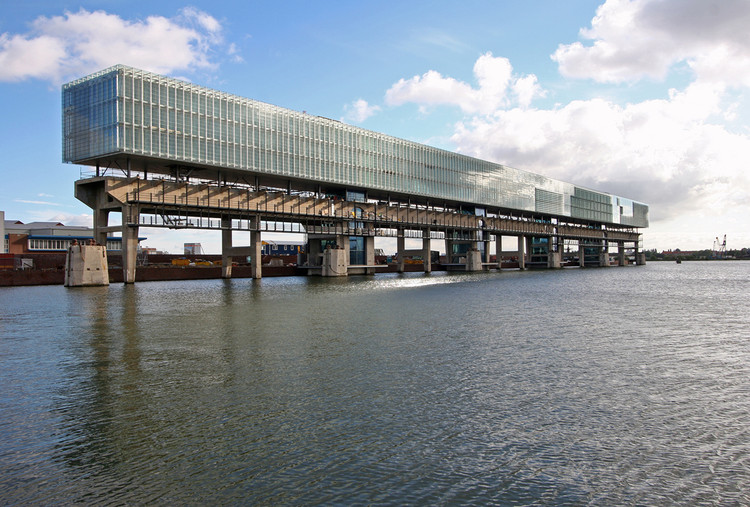 Text description provided by the architects. Kraanspoor (translated as craneway) is a light-weight transparent office building of three floors built on top of a concrete craneway on the grounds of the former NDSM (Nederlandsche Dok en Scheepsbouw Maatschappij) shipyard, a relic of Amsterdam's shipping industry. This industrial monument, built in 1952, has a length of 270 meters, a height of 13,5 meters and a width of 8,7 meters. A street length and width. The new construction on top is the same 270 meters long, with a width of 13,8 meters, accentuates the length of Kraanspoor and the phenomenal expansive view of the river IJ. Fully respecting its foundation, the building is lifted by slender steel columns 3 meters above the crane way, appearing to float above the impressive concrete colossus.

The challenge of the design for OTH was to utilize the maximum allowable load of the existing craneway. The concrete craneway functions as a foundation, and carries the maximum possible weight of a three storey building, with an asymmetrical overhang on the water-side; this is due to the heavier load barring function for the former revolving cranes that cantilevered to this side. The light-weight building of steel construction made the light-weight floors necessary. By using a hollow Infra+ floor system, the piping and wiring are tucked away in the floor allowing for a maximum clear height.

The glass building is clear and simple in plan. The newly built construction is characterized by its transparent double-skin climate façade of glass: the outer layer of moveable motor-driven glass louvers appear as lace-work around the building, the inner façade is of hinged timber windows with a full height from office floor to ceiling. This climate façade allows natural ventilation of the offices and acts as a buffer against heat in the summer and cold in the winter. The concrete Infra+ underfloor of only 70mm allows for concrete core activity. The water from the IJ river is pumped up and used for heating as well as cooling via a water pump.

The pre-existing facilities have been utilised in the building's new function. The former four old stairwells still remain as entrance to the building and are foreseen with panorama lifts and new stairs. The two gangways/catwalks alongside the concrete craneway function as fire-escape routes. In the heart of the original concrete structure, underneath the new structure, is extensive archive/storage space.

I am cycling along the waterfront, in search of a new location for my ever-growing practice.

Along the shores of the IJ river in Amsterdam North, through the abandoned landscape of the deserted shipyard setting of former NDSM. There are still remains, even glorious presence, in this relic of Amsterdam's shipping industry past as my bicycle stops. In the water stands an impressive colossus, a concrete craneway 270 meters long, 13.5 m. high and 8.5 meters wide. A street length and width. On top two motionless hoisting cranes. "Kraanspoor" (translation: craneway). Nothing is moving. Grass grows between the rails and the concrete skin shows moss. 270 meters of concrete silence. I see the battered empty landscape disappear into the water. From a distance, the remains of a shipbuilding heritage: an immense hall, workshops, a magnificent slipway. Across the water arise the tower spires of old city-centre Amsterdam.

I am certain: here, on this concrete mass that floats over the water, this is where I want to build my practice. This is the gold coast of the IJ. This is the heart of Amsterdam, this magnificent choppy gold-tinged water mass of the IJ. The energy is in the ground, yet untapped; regardless of the pollution and contamination. The road to realisation is long and laborious. But the energy of the land is intense and my enthusiasm sweeps all problems aside.

The municipality does not demolish the craneway, adjusts the zoning plan, sees the possibilities a rising sun over shores of the gold coast may offer.

The developers modify their position and build the quality building that we designed. A magical volume of three storeys, floating/lose above the existing craneway, the same 270 meters in length and 12.6 meters wide. Supplied with a moveable glass louver-façade. The building stands in the water, hangs above it, shows itself as transparent and is that entirely.. with a view of the largest waterway of Amsterdam.

Now that Kraanspoor is being preserved as industrial heritage and has a new function, I have a new dream: an adjacent urban plan in which the still remaining halls and slipways, production buildings and workshops are incorporated and receive a new function.

A seamless combination of old and new - industrial heritage and modern architecture in which the waterways are restored and the slipway determines the orientation. The entire place with its shipping industrial past has an intense energy. The object is to intertwine the old with the new, to preserve history, and not loose this energy.

The wharf is dead? - Long live the wharf. 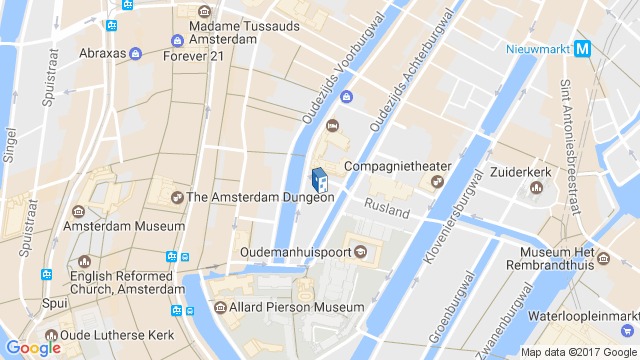 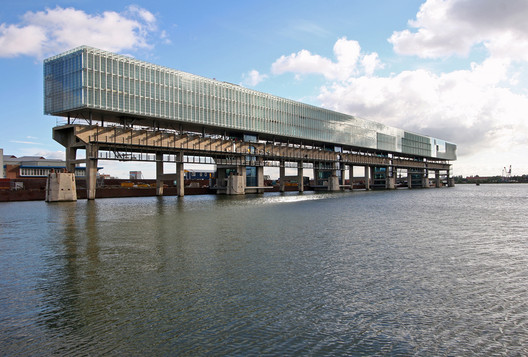