Text description provided by the architects. In June 2006 we were commissioned with the design of a new gymnasium, a canteen for pupils and an assembly hall, in order to equip “La Asunción” School with services appropriate to its needs. This school is organized by a group of different kind of buildings (religious, educational, sports, etc.) connected by outdoor sports facilities, gardens and wooded areas. With the passage of time, the free-open space has gradually diminished; therefore the strategy to address the new program was based on safeguarding the green areas and recreational spaces, and to concentrate the new constructions in one single place (previously occupied by disused building, demolished months earlier).

This desire to free the largest possible landscaped area leads us to bet on overlapping the three new constructions needed. Since the accessibility needs, the surface area and the height of each “unit” are different, the resulting building does not spring from a simple overlapping usage, but from a correct and precise “mixture among pieces”.

The ground floor, directly accessible from the outside (for the catering service), has been occupied by the canteen and the double height over the gymnasium; the assembly hall area flies over the ground floor perimeter in order to emphasize its bulk, while increasing the flight on the southern façade, in order to protect this one from direct solar radiation; and the gymnasium, on the semi-basement, extends over the entire built perimeter. However, such mixture of functions required to solve the communication among them and with the rest of the complex. To this end, it was set-up a system of stairs and ramps that characterized the whole intervention.

From the point of view of the shape, the ¨mixture among pieces¨ was resolved as a single building, blind on the first floor (assembly hall) and completely transparent on the ground floor (canteen with a beautiful view of the gardens and over the gymnasium, both illuminated by daylight); the gymnasium remains hidden in the basement.

In order to avoid problems related to the phreatic level (very frequent in this area of the city) it was considered to raise the ground floor of the building approximately one meter above the natural ground level. This technical response to a problem became a project strategy, by endowing the whole intervention with a solemnity that would otherwise not exist.

The desired visual effect was a big ¨piece of jewellery¨ that levitates over a green topography, characterized by a golden skin, long access ramps and a remarkable transparency. Its relation with the surrounding neo-gothic buildings is by contrast; it claims itself as a contemporary architecture, while taking into account the volume of the school´s main building and its façades hues. The client has supported this proposal from the very beginning, by showing interest on modern architecture and its possibilities.

The ground floor –canteen– was designed to be opened and directly connected to the large park through a glass wall; therefore, while pupils are eating they can enjoy the vegetation and the natural daylight. This type of wall ensures the gymnasium, with its double height, to be illuminated during the whole day with natural light. It also allows the activities carried out within the gymnasium to be seen from the ground floor (both internally and externally).

On the contrary, the assembly hall needs to be isolated from the outside and to be focused on what occurs internally. That is why it was designed as a golden box, which levitates over the ground floor and encloses an austere and secretiveness inside. Its morphology responds to functional needs. The stalls inclination is expressed outside by a curved lower profile, which qualifies the canteen area by compressing it once getting into the services area.

The skin of the assembly hall was solved by a golden aluminium mesh that changes its colour depending on the way sunlight falls on it. The design alters its density to let in more or less light and the views, according to each case. A big opening south orientated completes the volume of the main façade; it creates a great window for the previous hall of the assembly hall, opened to the Asturian landscape.

In summary, it´s a well-rounded building which contrastively integrates into the school complex and that is flexible for future requirements that the client may have. 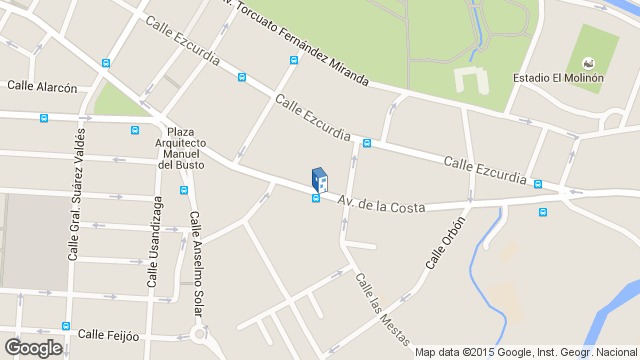 Location to be used only as a reference. It could indicate city/country but not exact address.
Share
Or
Copy
About this office
ASVAL
Office
•••