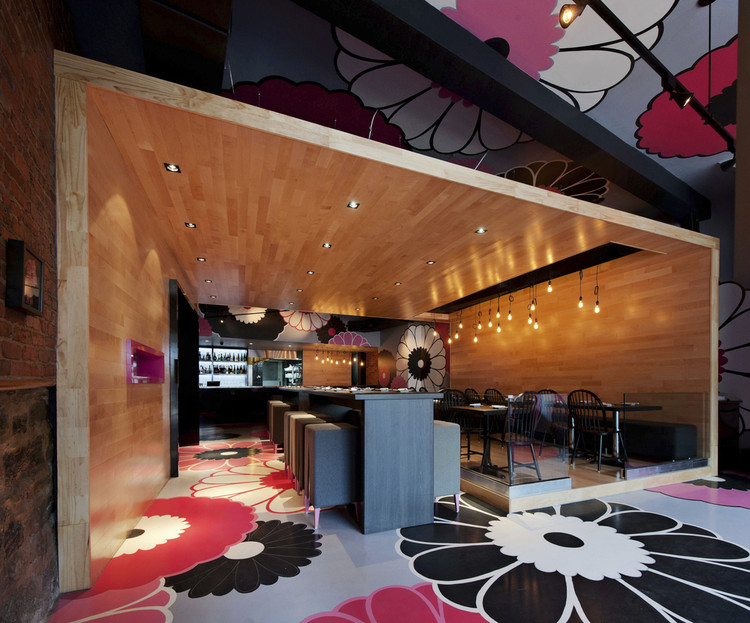 Text description provided by the architects. Since the recent opening of Japanese bistro Kinoya on Saint-Denis Street, the Irasshaïmase salutes have not stopped in this izakaya, the Japanese answer to the tapas bar. Modern yet imbued with tradition, this little gem of Japanese cuisine deserved for its jewel case nothing but an unusually inventive design. Created by the talented designer Jean de Lessard, who had carte blanche for this project, the volumes and shapes of great simplicity are making this space shine with a total casual chic.

Although the interior stone and brick covering had to be kept, the metamorphosis is radical in this once darken place. "Any trace of the previous Italian restaurant with its huge pizza ovens has disappeared. One can now enjoy the show of performing Japanese chefs in their open kitchen ", explains Jean de Lessard.

Changes to the existing circulation axis, as well as the creation of new viewpoints with different ambiances have given the space an amazing sense of dynamism and fluidity.

A wink to tradition

The designer has given a humoristic twist to the traditional "tatami" room which is at the heart of the project. It breaks the "cafeteria style" effect which is due to the high ceilings and the rectangular shape of the place and forces us to question our perception of space. The long sculptural strip made of yellow birch wraps itself around, as would a furoshiki, to form a "box" that the designer has positioned slightly off the mark. The reason for this becomes apparent when one moves along inside the bistro bar. "Jean thinks of the smallest detail, he is a great designer and a perfectionist who is passionate about design!", rejoices Ivy Dong, one of the owners. In this clean space, however, not a single detail is superfluous.

The gigantic flowers that run on the floor, walls and ceiling lead us into a world of fantasy and poetry. Such excessive demonstration is often seen in a manga universe. Here, the huge plum blossoms, peonies and stylized chrysanthemums have become contemporary representatives of thekamon (the heraldic insignia of ancient samurai clans). These identical patterns are also found on a tiny paper kimono displayed on the wall, the first of a series of ten works of art, which shapes and colors are a daring challenge to one another. This quintessential signature has become a part of the identity of Kinoya, so much that the aesthetic floral graphic is also displayed on the menu card.

The warmth and golden quality of wood, the delicate and sharp shades of pink against a masculine glossy black; the softness of materials in a more classic shade of grey all blend in with finesse, because for Jean de Lessard: "I wanted to create a place which would be sexy but not fake, a place where both men and women would feel good." Still, humour is never far away evokes the playfully clad-in-skirt bar stools created by the designer. Soft and indirect lighting is used to create different moods, as well as the play of chiaroscuro and of pitching "full" against "empty" through various architectural elements, such as the wood partition at the bar that the designer has detached from the wall.

If Kinoya was designed to be in the image of its trendy clients, it also reflects the personality of its young creative and dynamic owners faithfully. "We have so much fun working here", says Ivy Dong, and as for the chef Devin Chen, he concludes: "In my restaurant, I always feel as if I am wearing the yukata and that we are gathered on the tatami, my friends and I, for food and drinks and to have a good time! "Dōmo arigatō gozaimasu! 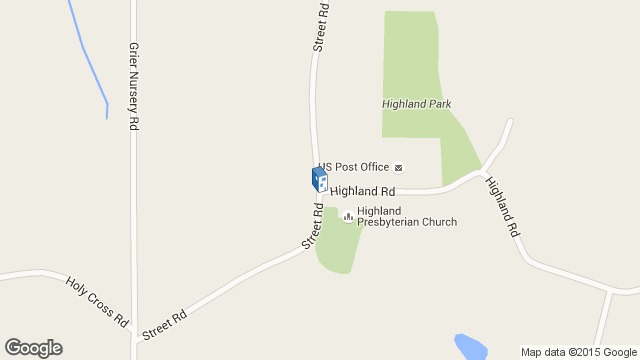 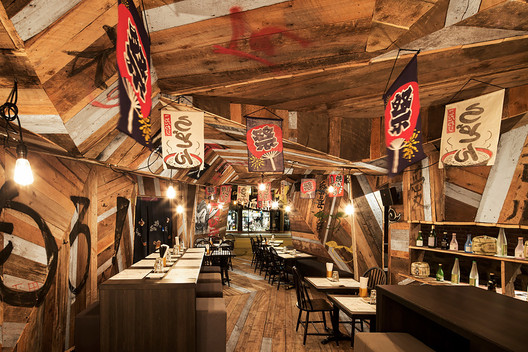