Text description provided by the architects. The client is the Chilean company of ironmongery, Scanavini, placed in Club Hípico, a patrimonial neighborhood of Santiago. When they acquire the property, they don´t know about the existence of an underground cellar, wich was a pleasant surprise. This discovery drove them to the idea of preserve the building. The cellar is placed in the center of the masonry construction, both spaces represent great heritage value.

As design premise, it was decided to restore the building as possible and intervene in a precise and subtle way in cases when was not possible to restore. The industrial building and cellar, are built with simple masonry system, without concrete reinforcements. The absence of concrete is an indicator of the time it was built, since this system was introduced in Chile around the 20s. When starting the restoration work, in January 2010, the building was without its south facade, and the north facade was cracked on top. After the earthquake 27F the tip of wall collapsed, but critical cadastres had already been done, so it could be restored to the original form.

To the south wall, nonexistent, it was decided to use a steel frame anchored to renforced concrete side walls. Similar constructive solution was designed for the roof: a steel frame supported by a renforced concrete coronation anchored in the new south facade steel. All these Steel structures were painted in black to denote its difference from the rest of the materials. The south facade cladding is made ​​in perforated Corten steel, with the design of the original facade in negative, linking the past, with the contemporary. 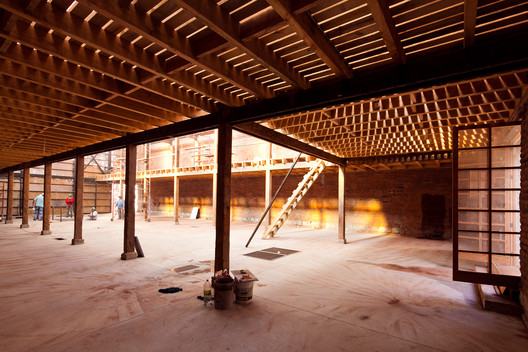