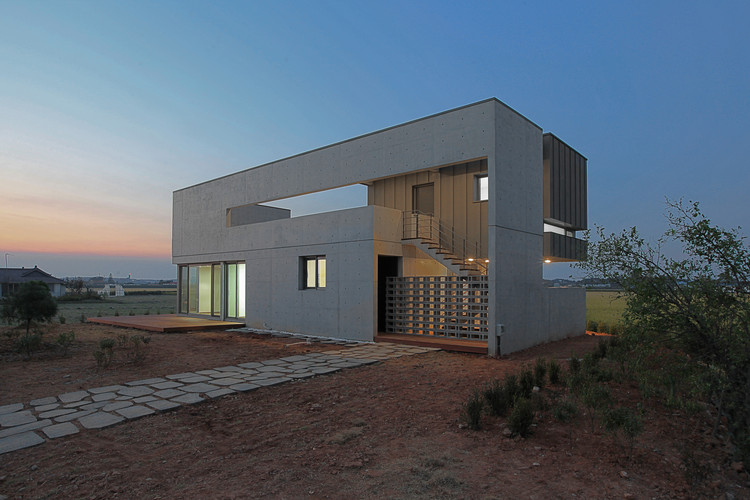 Text description provided by the architects. The impression was strange and dreary at the first when I had visited the site. The old house stood by itself on the field where harvest is done. Houses were scattered sparsely in the large field.

The client wanted to change the old soil house which was constructed by himself without a floor plan of it to  a cozy rural house. The only one thing he asked for was to build “a not-cold house” since he has lived in a house that was not insulated at all. I guess that he may expect that a warm house will be built with a red tiled roof and bricks like habit. However, I had second thoughts.

I imagined these… In early summer, a neat box on a green velvet carpet. On days of fall, a strong mass stands hard in gentle gold waves. Anyway, I was confident to make a not-cold house, the only one wish of him.

Although he had been quite nervous due to serious worries about the new house which was as weird as storage from other people in this village, he was getting to like the weird house in the mood of absolute support from his children. I noticed it by seeing a change from his unsatisfying facial expression to welcoming smile even though he did not openly express it.

The Bujang-Li house is composed of the first floor where the old couple will stay and the second floor for their children visiting them occasionally. The first and second floors are separated so that they should use stairs outside the house. I hoped to make the second floor, which will be used once in a while, like a different house or a neighbor still these are one house.

On the second floor, there is only one room and most parts of it are opened to outside as terrace. It is enjoyable to look around the wide field with a open view when standing there. When lying down in the shade of the roof, I can see the sky and feel the wind blowing from all directions. I wish that the place becomes a multi-purpose space for eating meals, taking a nap, drying peppers and having a village party.

The workers did not fail to take a rest there to avoid the heat after lunch when they were building the house in this particularly hot summer. I had enjoyed the joy as a planner while some place is used according to the intention.

Now all construction is done and the customer begins new life in the new house. I hope that his house is not “just not-cold” house, but “as well as not-cold” house. 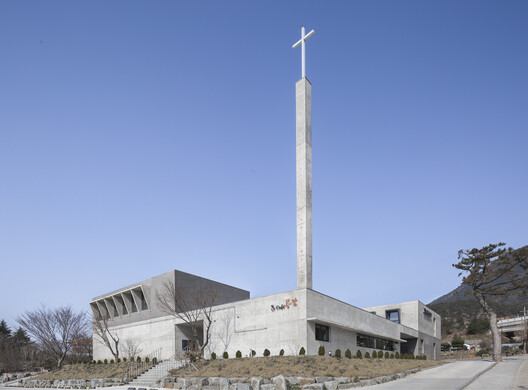 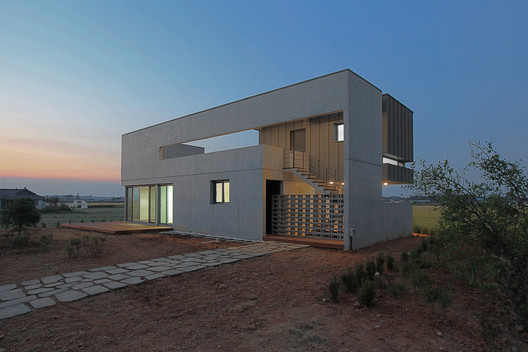