A small group of diverse students participating in the inaugural AA Visiting School Eugene were given the responsibility to design and build something that would enhance and reflect the forest, within a ten-day timeframe.

More on the Camera Obscura after the break. 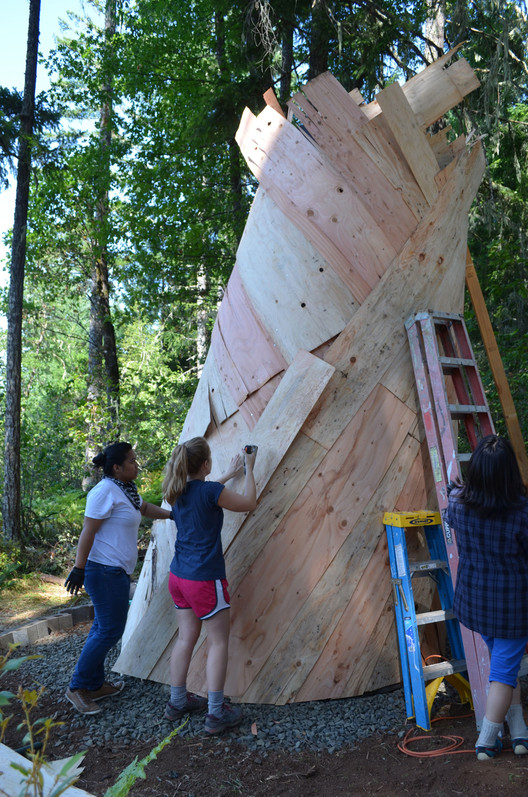 The course led students through the lifecycle of the trees in the forest, beginning with guided hikes and a tour to a local lumber mill. Students were then challenged to interpret the idea of “marking the forest,” and through several cycles of critiques and design development the group channeled their energy towards creating a16-ft occupiable camera obscura.

Placement of the structure was fundamental to the design; there had to be views worthy of highlighting and enough light to allow the camera to function. The group was drawn towards a sunny ridge overlooking timber growth in all of its phases. Sitting to the side of the skid road, the goal of the structure and camera is to refocus the view of the forest without detracting from the existing vista.

The view of the surrounding forest is deconstructed to highlight important aspects of the overall experience. Through two controlled manipulations of the view, the perspective of the visitor shifts which allows them to observe the forest in a completely new way. On the interior wall, the external view is flipped upside down and projected. The manually operated oculus focuses attention on the canopy, allowing the filtration of light and movement of leaves to be experienced independently from their environment.

Adding to the already challenging construction time-frame, there was very limited use of power tools at the edge of the ridge. Students relied on hand tools to find solutions to any construction question that was raised. For most in the group, this was the first life-size construction project.

“It is very rare that students have an opportunity to work with architecture at full scale,” said Jason Griffiths, a workshop leader who is a professor of architecture at Arizona State University. “These students can try things and make mistakes and decisions based on the real thing.”

Local Douglas fir veneer was used on both the interior and exterior as a sheathing system on the 2”x4” studs. The form is simple, allowing the focus to remain on the projected image of the camera obsucra inside. Reminiscent of local wigwam burners, the slanted walls are helpful for controlling the water flow during rain.

To maximize the impact of the structure, emphasis was placed on heightening the experience of the senses inside. An oculus with a manual trap-door opening draws the gaze upwards to the canopy and sky above. Once the door is shut, eyes adjust to the dark and begin to notice the striking details of the upside-down projection on the wall.

The spiraling veneer surface peels away from the central structure, creating a small entrance into the camera. This creates a relationship between occupant and structure upon entering the camera, which was designed to fit about four people at one time. Large gray gravel was chosen to mark the ground of the structure as a contrast to the surrounding dirt forest floor.

The site is located in the Bauman Family Tree Farm of Oregon, an educational forest that teaches young students and other organizations about the processes of the forest and it’s creatures. Taking this into consideration, the group created an experiential structure to become a destination for visitors. Many students in the group had never worked with a client before, which added another angle to the design and construction process.

The workshop is centered around understanding the forest as a resource through investigation of its processes, and this project will become an relevant addition to the study. In years to come, the structure will transition and change as a result of weather, winter storms, and animals, giving students a firsthand glimpse at how structures react in their environment.

The Visiting School Program of the Architectural Association of London is offered at the University of Oregon in Eugene. Information for next year’s “Marking the Forest” can be found on the AA site: AA Visiting School Eugene.