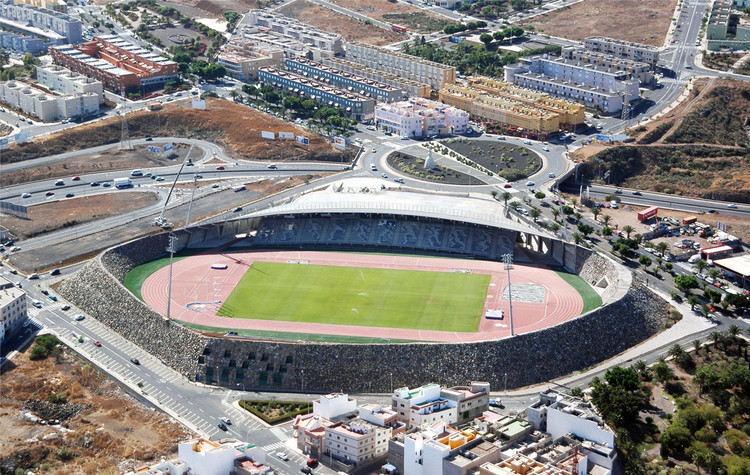 Text description provided by the architects. In the district of Tincer, on the outskirts of Santa Cruz de Tenerife and close to the boundaries between the city, the mountains and the motorway, is the new Tenerife Athletics Centre, a monumental scale project that reflects the volcanic origin in the formalisation of a crater with slopes that are fixed thanks to the Cyclopean volcanic rocks that cover it, creating an image that evokes a pyroclastic cone. This single forceful proposal resolve a programme that integrates a range of different uses, under a unifying petrified mantle. At the same time, this action lays claim to its iconic value through its dimensions, while the impact on the environment is minimised. The crater provides a new raised public space to the exterior, finished in irregular basalt stone, from where a visual relationship is established with the Atlantic Ocean. Inside, we see the different facilities that include a high performance centre, a gymnasium, dressing rooms, warming up track, press room a lecture theatre/projection room, opening onto the indoor space via a set of mobile screen walls, with a capacity for 200 people.The athletics track is situated half way up the slope on the plot, so the earth moving of the excavation and the embankment are off-set in the new topography that is generated.

The terraces, with capacity for 4000 spectators, blur into the boundaries of the plot, where the natural blends with the artificial.

The volcanic basalt stone is the leading player in this proposal, as it is the very same stone that has been dug out from this site to act as a foundation for the great stone banks that will protect athletes from the Trade Winds when indulging in their sport.

The large open empty space that has been used to generate the "indoor space" under a roof, has meant that a large amount of basalt stone has been dug out, covering the needs for this material, re-used in the different building units.

The embankments around the sports arena, which formalise the volcanic cone, have been built by mechanically introducing stone blocks from the excavations, which are place on the steeper slopes with concrete. They have also been placed on the outside face of the wall, and built as dry stone walls on the inside. The inter-cellular spaces between stones are filled with soil, to reinforce the growth of native flora on the embankments.

In the area with the greatest height difference with the surrounding ground, the greater height of the embankment is used to make it habitable and place the residential area for sportsmen there in 12 apartments providing accommodation for 48 athletes.

The outer slabs that are cut off the volcanic rock that is excavated using an angle grinder are used on the outside, while the cut pieces will be used in the square and the area around the stadium. These outer slabs of stone will provide continuity to the stone embankments, creating a single image of the entire volcanic cone.

Another of the challenges of this design is to integrate it into the town layout by means of a new public space. A large, slightly sloping platform formalises a new public square in the neighbourhood. The stone, this time cut with an angle grinder, to a size of 4 cm thick, harnesses the irregularity of the smaller sized stone blocks in the entire dimension to lay out a large stone mantle that merges together at the edges when it reaches the ends of the perimeter embankments.

The rest of the stone left over from the earth moving has been re-used and crushed mechanically on site, as crushed stone, in a 10-15 cm thick layer to filter rain and irrigation water used on the natural grass.

The ventilation and lighting under the sub-structure of the square is resolved with a passive system that reinforces a system of natural ventilation through the courtyards and overhead systems in the exterior public space.

The city opens up to the territory and becomes a landscape in itself. 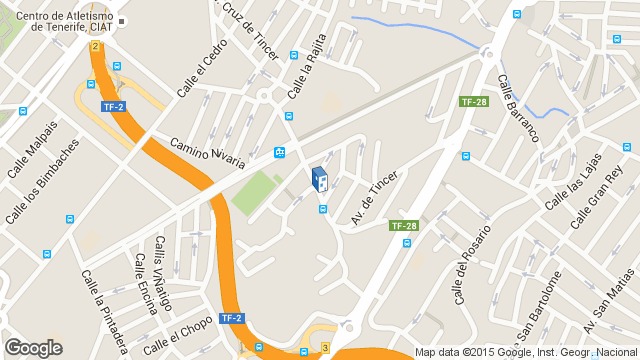