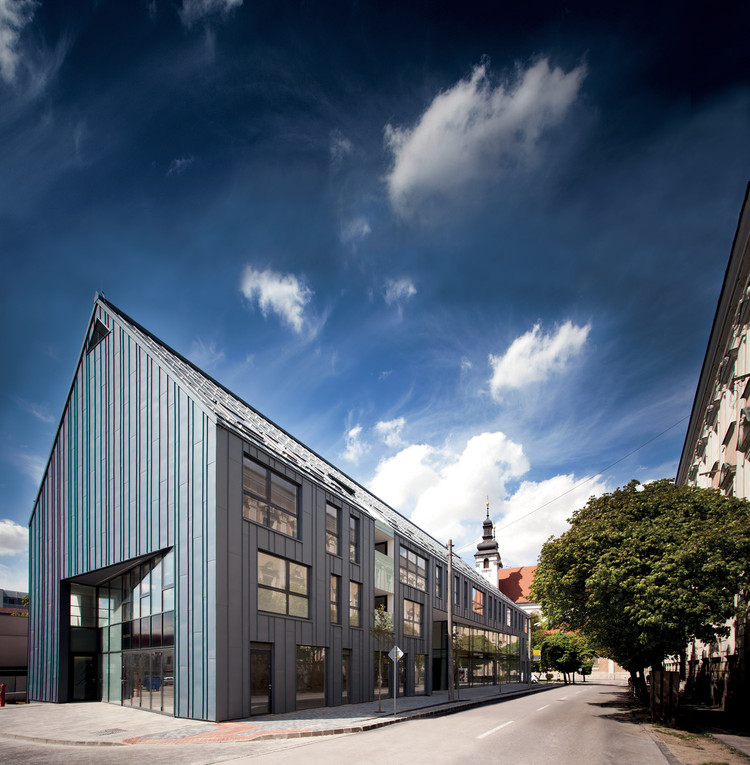 Text description provided by the architects. The urban situation is unique. The Leonardo Building is situated directly in the historical center of Trnava, in Town Conservation Reservation on Holleho Street, where are a well-preserved historic building dominants – such as complex of university buildings, the Archbishop’s office, Trnava University, early-baroque cathedral Church of John the Baptist. In the close vicinity of the location, there has recently grown a newly built hotel Holiday Inn with a congress hall. Together with the mix-used residential building Leonardo, it builds up the integrated urban block.
ConceptConceptual design of Leonardo was created on the basis of invited architecture competition in 2007. We wished that our proposal will be fresh, collateral and authentic impulse diversifying the Town Conservation Reservation with its limited conservative opportunities for flexibility and other developments of the Central urban zone. Functionally, the residential building has mainly got a housing function with shops in parterre and the entrance ‘piazza’ resembling the atmosphere of medieval micro-squares.It was an impressive gap with a nice width of 20 meters without any supports. Inside of the empty social space was a ramp and terraces for relaxing in the greenery. The main objective of ‘piazza’ was to lighten the compact material and acquit the space, bring in the street life, create urban public space. Do not close young people in front of gates but freely communicate in a ‘green language’, bring some colors, lightness and fresh air. Strengthen the environment identity by adding new architecture quality leading the enriching dialogue with the community.Project, its further development and finding the compromisesAfter consulting the draft on the basis of MB in Trnava, it was more than clear that our progresive proposal does not correspond with their conservative ideas, and it is perceived controversially. The conservationists’ requirements relied on the Heritage Conservation Principles, which promoted the usage of ‘traditional’ shapes, materials like a plaster facades in pastel color, red roof tiles, following rather the imitation of historical styles. These 20-years promoted conservative trend in conservation in Slovakia, which so tightly defines the aspect of new buildings, has got a tendency of directing it to the outdated trivial perception without low architectural quality and true authentic aspects. It supports historicist rather than progressive and authentic architecture. There has started a long and difficult process of finding the compromises, and confrontation of different ideas about the aspects of New in Old. About how the contemporary architecture should looks like...Implementation projectThe whole process started in late 2007, in the period of construction boom, and obtained the building permission in 2009 when the entire investment process was meddled with the crisis, and the original investor was unable to construct the building. The project was acquired by a new progresive developer led by the Architect Pavol Kollár in charge, which requested the change of functional utilization, disposal solution, and architecture quality modification so that the project will have a chance to survive and be different than the other new buildings in Trnava.However, the window tectonics was changed to required ‘vertical rectangles’ and the aspect of both hips has changed as well. The originally designed loggie in north hip have been replaced by skylights. The space arrangement has been made more effective. We have emphasized the building entrances by dynamic inclination, ending in a small passage – ‘micro-micro-piazza’ (width of only 7.5 m instead of 20m). There have been many changes during the process but final shape of Leonardo building stayed in the expression of archetypal abstraction as in the beginning. 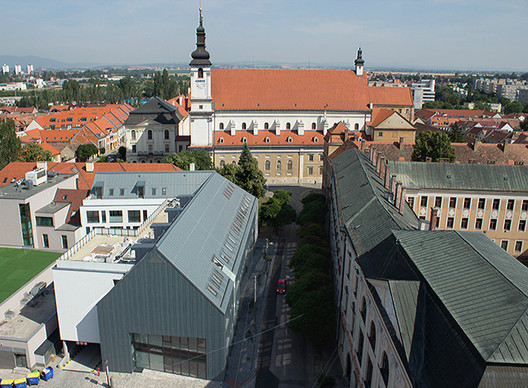