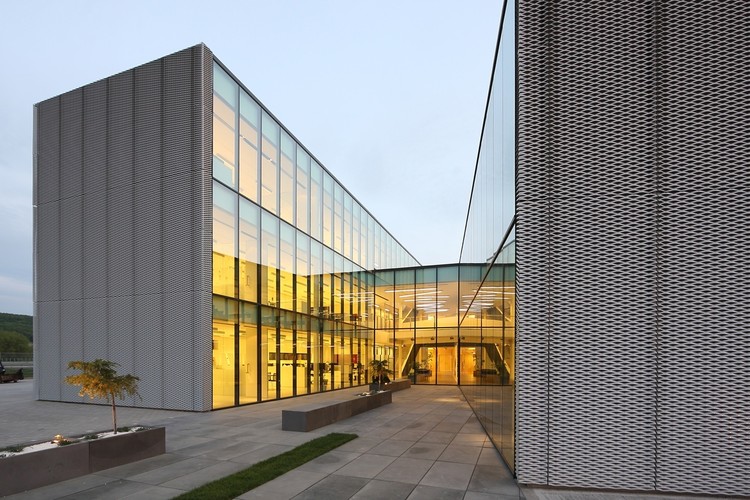 Text description provided by the architects. Recently completed Phoenix Zeppelin building functions as the company´s national corporate headquarters as well as its local branch in Banska Bystrica region. The main business of the client is in sales, servicing and renting of construction machinery and equipment. The building accommodates and integrates such diverse uses as offices-administration centre and services-repair centre with warehousing and technical areas located between them. The presence of the busy four-lane road adjoining the site and the requirement of the client to externally showcase the machines they sell, repair and hire were the main starting points of the design process.

The offices were arranged into two wings, two- and three-storey high forming partly enclosed patio on the northern side of the building with most windows facing the patio. This arrangement considerably reduces the noise levels of busy car traffic while the northern orientation of the patio helps to block low morning and evening sun from entering the offices. The wings overshadow each other thus reducing undesirable overheating and glare in the office area.  A patio at the ground level provides the main foreground at main entrance and brings natural elements of grass, rain or snow into the interior. This concept also allows the long eastern and western façades to remain relatively closed.

Solid effect on long façades with only narrow horizontal slot windows is supported through the use of metal screen of expanded perforated aluminium sheets. This façade treatment is complemented by solid panels in bright yellow colour occurring where the building mass folds. Sheets of expanding metal unify the façades despite diversity of internal uses behind them whilst also acting as a sunscreen system over the windows. They also help to create plain and elegant background for display of most important items – building machines of various shapes and sizes.

Furthermore, during sunny days the light on aluminium sheets creates subtle moire effects changing with the movement of the observer passing (or rather driving) by. External  fire escape stairs also highlighted in bright yellow is an important feature of western façade whilst its addition also enabled to create the main interior staircase as open, without the need for fire protected enclosures and lobbies. The main feature on easter façade (facing the road) is a large panoramic window of the main conference room opening views over the nearby hills across the road. Southern façade works as an oversized storage shelf for a display of the items related to client´s business. This showcase is well exposed and visible as cars enter the city from the south.

In terms of organization of the building, the focal social space is the central patio in front of the main entrance. This is where the main circulation route starts and it is also the popular space for informal encounters of both employees and visitors of the company. Directly adjoining it at the ground level behind the glass façade is the entrance hall housing the department of first contact flanked the upper levels by open-plan offices of the administrative department. The layout is thus clearly organized around the patio and entrance hall area – places accessible by firm´s customers. Large format concrete tiles used both in and outside as well as outdoor concrete planters and grass „tiles“ help to achieve natural and smooth transition between the patio and the internal hall area.

The main, ground-floor hall flows into a corridor linking administrative fraction of the building, storage areas as well as servicing and operational areas at the rear end. A canteen, located in the center of the layout at the first floor level, is the main democratic focal space of the building and it is accessed from two sides by mechanics and office workers respectively. A space entity and a simple and neutral white office furniture is a norm throughout. This is, in the areas accessible by customers such as meeting rooms or rental office, complemented by walls covered with a large expressively coloured original artworks.

The main building material for walls and slabs of Phoenix Zeppelin building is cast in-situ reinforced concrete with a mineral thermal insulation applied externally. Heating and cooling capacity for the building is provided by two air-water heat pumps. Interior spaces are mechanically ventilated with heat recovery ventilation system. Entire building is backed up by UPS and diesel electricity generator. 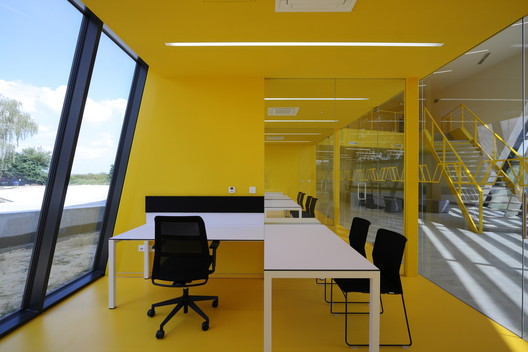