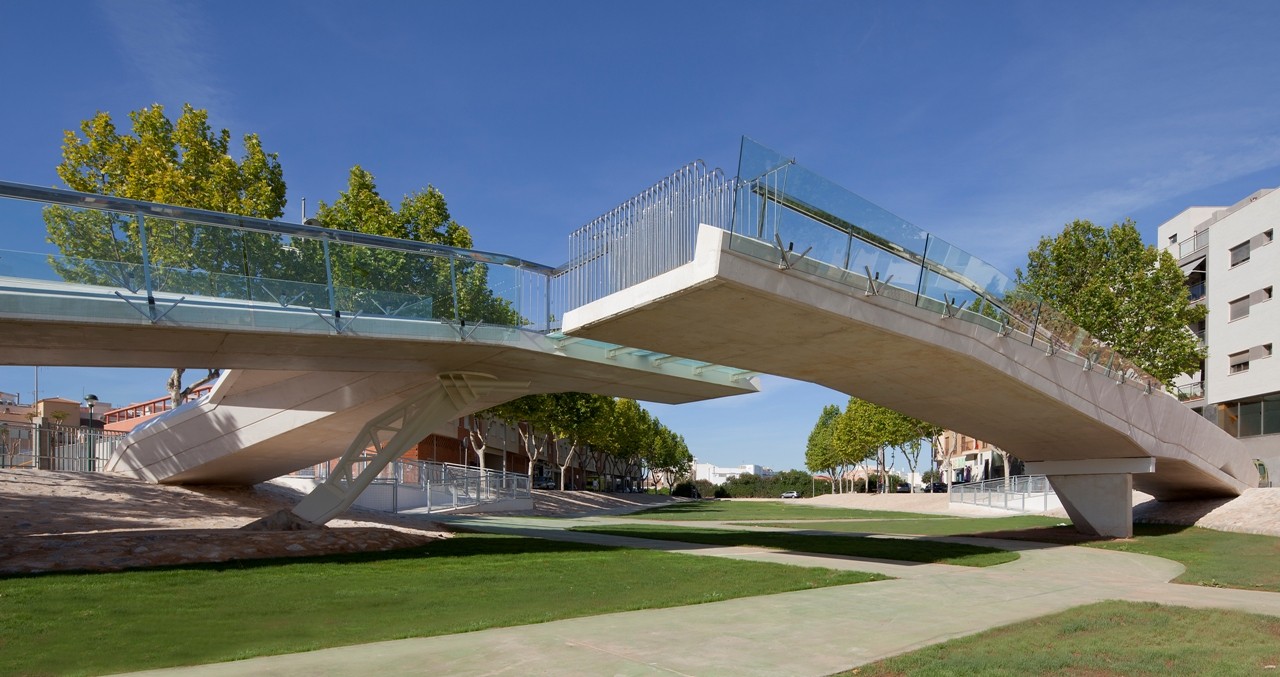 Text description provided by the architects. The project has been thought to establish a relationship between two different parts of the town, divided by a rainwater channel. Each side of the channel causes a different way to cross, a new shape to define a border. The connection is a kiss, a softy touch of structures. The bridge is a new way to understand the city.

The beams have been structurally designed as the Japanese art of paper folding called “origami”. The material we have used is white concrete plate instead of paper. The two geometrically different parts have different structural behavior. The first part has a large cantilever beam 16 m length, while the second has a Y plan geometry comprising the main path itself and a Venetian stairs. The length of the main path of both structures is over 60 m.

The pedestrian bridge crosses an artificial rainwater channel with a skew of 45 º with respect to the referred channel.

The union between the cantilever structure and the Y-shaped one is located over the middle of the channel. The encounter of the two sections in the central area is carried out on the lateral part of any parts, being connected by a framework of pinned steel beams on which a glass floor acts as walkway.

Each stretch has different transversal sections. These sections are variables to adapt its dimensions and shapes to the requirements of stiffness and strength imposed by the overall geometry of the footbridge and the acting loads used to design it.

The cantilever structure has a U-shaped asymmetric cross section which conforms a 2.5 m wide path with variable lateral walls high.  The maximal depth is 1.35 m at the section located over de central pile, and the minimal one is 0.25 m at the edge of the cantilever.

The Y-shaped structure has a Z-shape cross section. In that case, the stresses caused by the vertical or horizontal loads are associated to bending, torsion and shear mechanisms fully coupled.

The material which shapes the footbridge is white self-compacting concrete with 60 MPa of characteristic strength. The concrete is reinforced with corrugated rebars of 500 MPa yielding stress steel. The cantilever structure has also been post-tensioned by means of 4 “5Æ5’’ tendons with steel of 1860 MPa of maximal breaking strength. The initial tension force has been 1020 kN for each one.

The post-tensioned tendons are located in most of its path in the walls which conforms the U-shape section. The two lowers ones of each side have been twisted spatially to be conveyed through the floor slab, at the extreme of the cantilever.

The foundation was performed using conventional concrete, it is superficial and any part of the footway is independent to the other side. Has been necessary to build a large concrete cubes in the bridge abutment zone in order to guarantee its static equilibrium, because the existence of the large cantilever beam generates important bending moments in this position.

The Y-shaped structure pile is a steel column tilted 38 degrees with respect to the vertical direction. This pile joins the central foot of the foundation with the spot in which the walls of the cross sections of both sides of the Y are joined. The Y-shape structure with its foundations is an integral bridge. To analyse it structural behaviour have been necessary to take into account the rheological and thermal actions, which generate high stress levels, not at all negligible.

The cantilever structure with its foundations could be considered as a semi-integral bridge just because the pile has two elastomeric bearings, while the abutment is directly joined with the main structure. Like in the other case, to the structural analysis the rheological and thermal actions have been taken into account.

From the resistant point of view both sides are independent except against transverse loads.

The connection between both structures has a structural clearance of 20 mm, enough to allow an independent behavior in case of common actions due to wind, rheological and thermal effects. In case of high earthquake actions the Y-shape structure braces the cantilever one.

The central joint substructure has been built at the same time with the installation of the functional elements (handrails and lighting). At that time the youngest concrete had 90 days, so a great part of the strains and deflections due to the concrete rheological behavior had been already produced. That was important due to the very different deflections expected for those effects in each structure.

Special care has been taken in consideration of dynamic loads generated by pedestrians when they are walking on the structure, because the cantilevered part could present dynamic interaction. Finally the rigidity provided in design with variable section solved this problem. This possible problem was completely discarded once the testing was performed with static and dynamic loads. 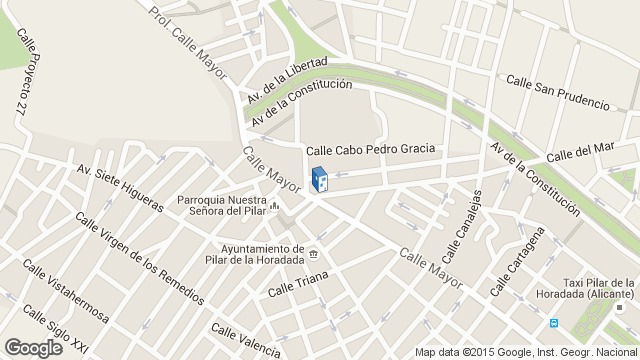 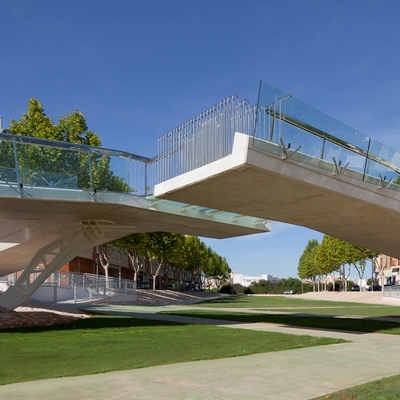