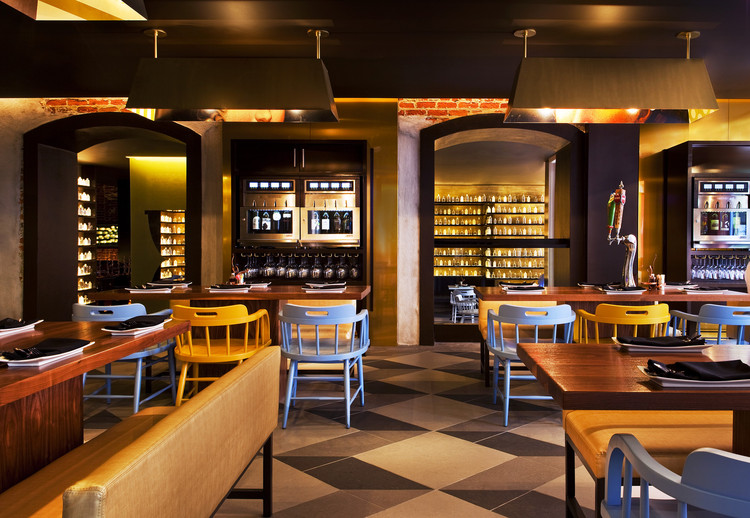 Text description provided by the architects. We believe that good designs come from research and exploration, it’s something that develops from within the physical and social contexts of a place. New Orleans is a city brimming with stories. It’s the birthplace of Jazz. It’s where the first cocktail was invented. It’s the stage for novels ranging from A Confederacy of Dunces to Interview with the Vampire. It’s where tarot reading and dark arts thrive. We discovered the city has these fantastic undercurrents wherein stories brew. At the W French Quarter, these mysterious undercurrents which create the social fabric of the city itself are the very basis of our design.

The concept for the W French Quarter has two key tenets which actually share more attributes than one would initially think. Firstly we focused on Jazz – Louis Armstrong, the trumpet, the brass, the mixture of European, African and Caribbean sounds. Secondly are the dark arts – tarot cards, gris-gris, amulets. What binds these is that they are both unscripted and emerge from a mysterious underground. Like the city of New Orleans itself, they have their own internal logic which is intuitive, impulsive and spontaneous.

The floors of the hotel are split into two different types: Jazz or Tarot. In the guestroom there is an image which goes floor-to-ceiling and partially across the ceiling, essentially wrapping the corner of the room. In the tarot rooms the image is of the queen of pentacles and in the jazz it’s a close up of the trumpet. The minibar is a faceted metal object with an illuminated top, a modern take on the idea of a candle-lit alter. Covering the TV is a convex mirror which gives this awesome warped perspective of the room, like you’re looking in to a crystal ball . The full height shutters are a direct reference to the architectural history of New Orleans and offset the clean modern lines of the furniture.

That New Orleans is the birthplace of both the cocktail and Jazz is not surprising as it is a city with diverse cultural currents that mingle and re-inform each other. Sobou captures the idea of mixology as it relates to not only cocktails but also Jazz and the dark arts. Each of the spaces in the restaurant has a distinctive interpretation of the concept of mixology. The entry and front dining space recalls an apothecary which speaks to the origins of the cocktail. From floor-to-ceiling the walls are clad in bottles and the space is divided by apothecary cases and illuminated display cases house a collection of vintage tools, shakers and glasses from the Museum of the American Cocktail.

The main dining space has one way glass installation where glowing bottles multiply into infinity and a pair of large brass light fixtures recalling the end of a brass horn illuminate the space. Visible from all dining spaces is a gently curving brass bar. The honey granite bar top is interrupted at the chef’s table where it becomes an elliptical glowing surface of light. Adjacent the bar is a modern beer garden where in there are self-service enomatic wine machines and beer taps built directly into the tables. Above each table hangs a rectangular brass light fixture inside of which are portraits of women’s eyes. Thus while the exterior of the shades are a direct reference to brass and its role in Jazz, the interior of these pendants suggest a concurrent yet alternative underground movement in the city of New Orleans. 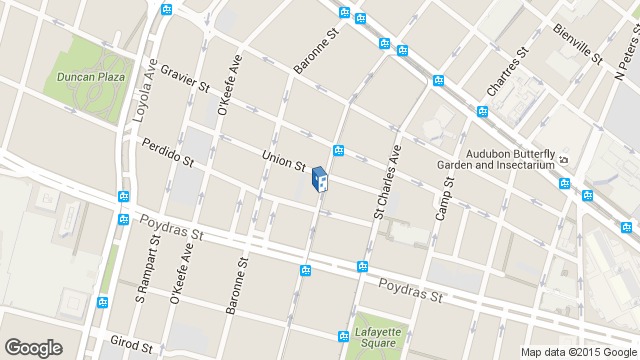 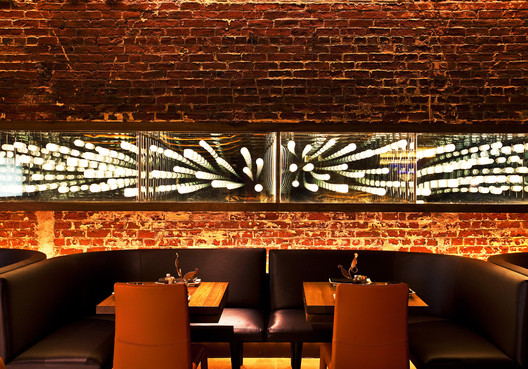