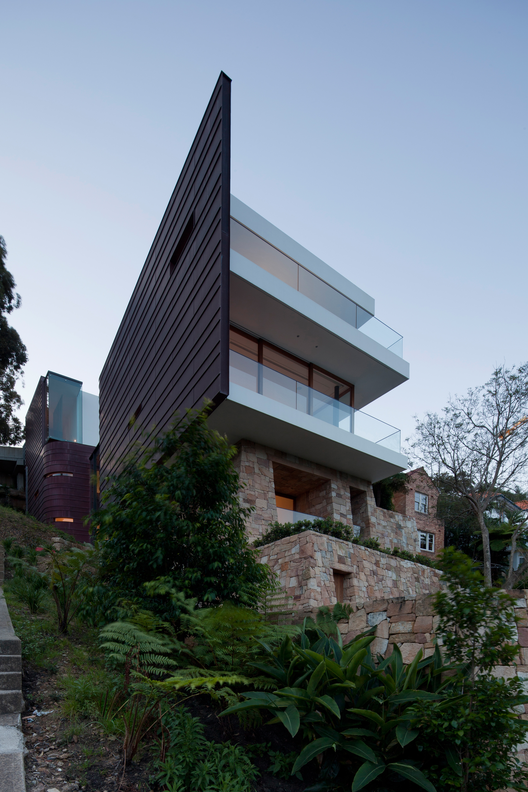 The site is a recovered sandstone quarry, steeply benched out from historic mining activity. The initial idea for the site was a series of platforms stepping down the site, enclosing courtyards for protection and opening up to the north-east aspect and view. This idea developed into the creation of two copper clad curved volumes which enclose the internal areas, the copper wall protected these spaces from the southern aspect and created privacy for the home. The open edges of these curved walls open to the north and the view and the closed walls contain small apertures which frame particular views over the site and the harbour.

These two volumes sit on a sandstone podium, carved from the salvaged sandstone from the site, with 'balistraria' windows which framing views over the garden and Chinaman's Beach. This podium houses a cellar and guest area.

The space between these two volumes creates internal protective courtyards over two levels facing north. This central courtyard served to let filtered light penetrate deep into the house and also connect all of the areas of the house by a sculptural timber stair. These courtyards also serve to connect the linear pool located on the north of the house, within the sandstone podium.

The materiality of the house is purposely restrained, with a palate of copper, salvaged sandstone, and recycled blackbutt north facades and windows. The house is entered via a glass volume which faces both the view to the east and the rock escarpment to the south, the side walls of this volume serve as a gallery walls. The entrance idea is conceived as a sequence of views between Sydney Heads, the rock escarpment and the artwork of the gallery walls.