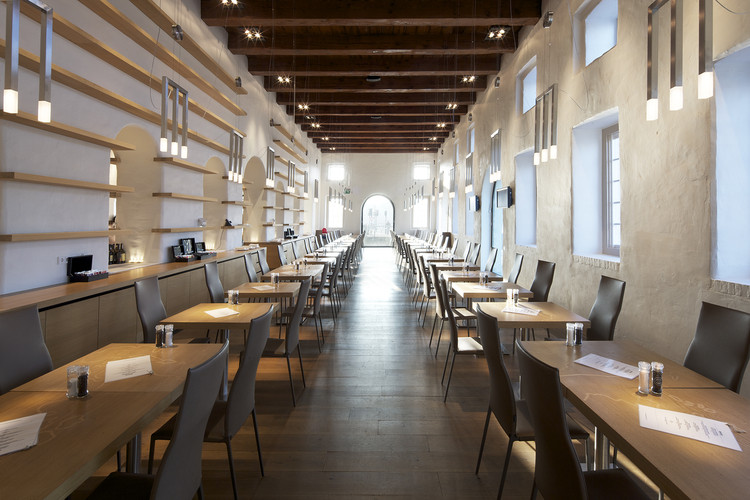 The 17th century-built Maritime Warehouse in Amsterdam, originally designed by Daniel Stalpaert in 1656, underwent a retrofit to make its interior courtyard a suitable space for cultural activities throughout the year. The original warehouse was designed as a warehouse in the water, built in the tradition of the Dutch Classicism and with a geometrical layout. The new glass roofing that will cover the courtyard, designed by Laurent Ney, and the general renovations to the interior were designed by Dok Architecten, was completed in 2011.

As with many renovations on historic buildings, the goal is to retrofit the existing structure to accommodate modern uses while retaining the cultural and historical integrity of the building.  The National Maritime Museum is a setting for a broad range of exhibitions sharing inspiring stories of the sea and discussions on its relationship with Dutch history and urban development.  In preserving the building for its new interior, the architects used the structure and features of the building to keep its character within its surrounding.  The four ressaults are used as rising piers and orientation points, while the newly roofed over courtyard becomes a central interior space where visitors can orient themselves and find various routes the lead through the museum.  Additionally, the jetties around the building are removed, so the sturdy naval warehouse will once more be sited in the water.

Dok architecten led the general renovation, including the offices, restaurant, rentable rooms – such as the Tromp Room and the Admiralty Room – the library and the basement with its sanitary fittings. A range of national and international designers contributed to the exhibition spaces, including Atelier Brückner, Haley Sharp, Event Design, Hypsos Leisure with Studio Tinker, and others.

Below Laurent Ney’s eye-catching glass dome, the floor finish consists of sustainable, innovative tiled flooring. Dok architecten has developed this acoustic floor in cooperation with Ingenieursbureau LBP Sight. It consists of a nine centimetre thick travertine floor slabs, with ‘stiletto heel friendly’ cross-shaped openings in between. This has given the new courtyard, called ‘Het Open Pleyn’, the appearance of a brick paved city square, while also making it suitable to be used as a concert hall or a festive venue.

Original elements of the architecture have been reused in various places, such as stairs that have been positioned between beams to emphasize the existing structure and new design’s reverence for its past.  The architects write, “Today, you are walking closely along the beam supports, so now and again it is just like you’re touching the seventeenth century”.   The stair wells are freely accessible to the public right up to the attic floor. The vertical risers are connected to the service shafts and the sanitary units.

By putting the services within the roof structure, under the ridge, the services do not take up any space in the building. Air distribution has been facilitated by raising the floors. The offices are located in the attic. Light and pleasant work stations have been created in between the beams.

A lot of attention has been paid to sustainability, both in terms of services and the re-use and use of materials. The building has been fitted with a cold-heat storage system and natural materials have been used. Demolition timber from ships has been used for the library’s reading tables and the sanitary installations have been fitted in the eighteenth century’s vaults. Those were discovered during the construction works, by the restoration consultants Rappange & Partners, and they are now available to the public for the first time. Emerging from the ‘immersion of the museum visit’, the visitor shall now again be able to soak up the unexpected beauty of the original building.

Laurent Ney describes the design strategy and efforts for the structure: ”We won the competition for the covering structure over the courtyard. The requirements set by Monumentenzorg (Dutch heritage preservation commission) of this former 17th century depot of the Dutch Navy were very strict: causing the least possible infringement on the monument and creating a semi-outdoor climate in the courtyard. The navigation rose on historic nautical maps of the museum’s collection is the source of inspiration for this refined and slim structure. The new roof is an example of integrated design. The objective was to cover the 34m x 34m courtyard by as slim a structure as possible, which is reversible without causing any damage to the building. In order to achieve this, all elements were tuned into each other. To maintain the indoor climate a glass configuration was specially designed for this project, which achieves the maximum combination between keeping heat outside and letting light and colour in. The glass has a sun-shielding coating which ensures additional climate control – an open band along the edge of the roof structure allows for natural ventilation. The total weight of the roof structure is 214 tonnes. The steel structure weighs 148 tonnes and consists of over 6,000 different parts, used in the structure, including 868 nodes. A glass package of around 62 tonnes and with a total of 1016 panes lies over that structure. In total, over 2.2 km of ribs have been welded together. Into the nodes, computerized led lighting has been integrated. This is used both for main lighting and emergency lighting, as well as for atmospheric lighting, which allows for scenographics and a unique experience.”