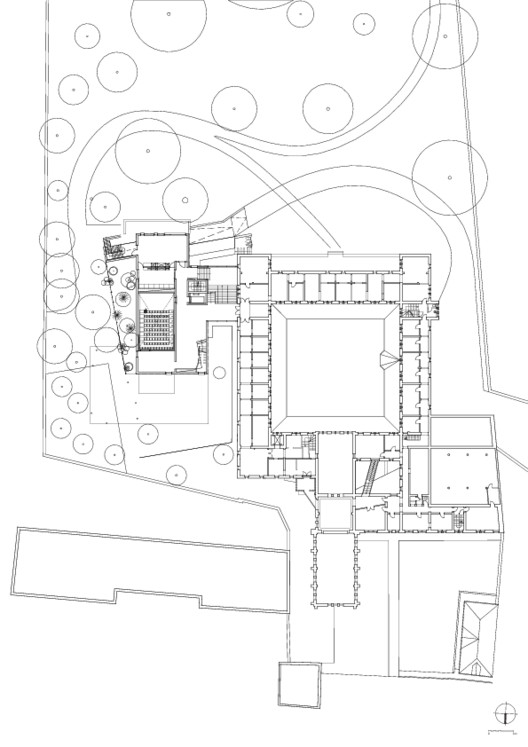 Hidden within a traditional block of houses, the new extension to the Museum of Photography in Charleroi takes roots in the orchard of a former Carmelite convent. The building is inside the enclosure of the convent, which hides a big garden which has several trees registered with the Heritage Inventory. The park is surrounded by backyards from suburban streets; a public school and a sports complex.

By investing the park, the new building invites visitors and neighbours to inhabit this inner outdoors. The park creates the link between three social functions: culture, education, and sports. Its opening to the public becomes a matter of social dynamics and urban transformation.

From the outside, the new building seems to call out to the surroundings, its succession of hollows creating lines of sight or backgrounds of a spatial scenography. The multiple shapes in the foreground become meaningful since they are related to their context (park, houses, equipments…). The inner stroll catches this outer experimentation and gives it the form of multiple looks.

The architecture playfully blurs the boundaries between inside and outside spaces: by crossing the glass hall from the ancient convent to the new building, the visitor imagines himself projected in the park; the cantilever grows hollow to allow daylight lighting up an outside fern cover; the winter garden shelters fragrant plants inside the museum. Each place forms both a specific room and an antechamber to the following ones, as a kind of ‘between space’ or ‘between the two’.

The guiding formula for the project has been 1 +1 = 1, as the new building and the convent become one Museum, the first in the continuity of the second. For 6 months, the program of the extension has been carefully considered with Xavier Canonne, director of the museum. The functions were distributed between the 2 buildings, like in a game of dominoes: spaces within the convent shifted functions, as the previous occupants were to find a new home in the extension.

Although the extension is opening this year, its existence was already foreseen at the time of the first renovation of the convent. The Museum of Photography in Charleroi, founded by George and Jeanne Vercheval has occupied the convent since 1987. In 1993, l’Escaut intervened to guide the integration of artworks by the artists Francis Alÿs, Edith Dekyndt, Jean-Claude Saudoyer and Marc Feulien. Thereafter, l’Escaut was put in charge of the entire renovation project, which ended in 1995.

The transformation of the convent into a museum of photography was a reverse process of existing logics in the building. A place where looking at the world was forbidden because of religious reasons became a place of revelation of the image for societal reasons. Its extension defies conventional museum logics by multiplying the relationships to photography, its history and its many facets of representation.

The construction of the cantilever is a premiere in Europe: its support is ensured with the use of cross laminated timber panels. The use of wood comes as a result of the experience of the Weinand group who are experts in the field of innovative wood structures. Yves Weinand is a professor at the EPFL in Lausanne and brings an international know-how to the project.

The work of Jeanine Cohen reveals the profoundness of the building, flirting with the sky and the ambient light. Inside the anodized profiles, coloured panes subtly enliven the façade, changing with the light and the time of the day. Photographic in its own right, the work questions the meaning of photography as well as our perceptions. The luminous skin gives an aerial lightness to the construction.