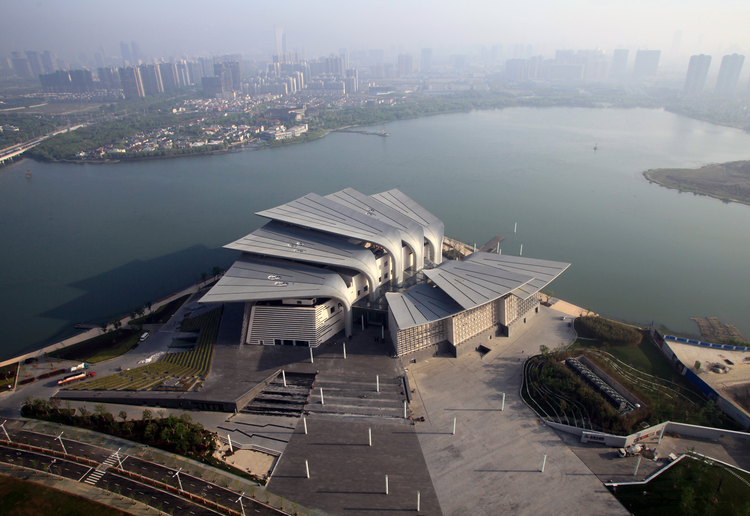 Text description provided by the architects. In 2008, PES-Architects won the first prize in the invited international architectural competition for Wuxi Grand Theatre.  The other competitors were established and well-known practices from Germany, France, Japan and Denmark.

The main idea of Wuxi Grand Theatre is based on its location.  The manmade peninsula on the northern shore area of Taihu Lake and the highway bridge nearby make this location comparable to that of Sydney Opera House.  Due to this location the building is an impressive landmark, rising up to a total height of 50 meters like a big sculpture from the terraced base.  Its eight gigantic roof wings stretch far over the facades, giving the building a character of a butterfly, while protecting the building from the heat of the sun.

The architectural concept is unique: inside the steel wings are thousands of LED lights, which make it possible to change the colour of the wings according to the character of the performances.  This is possible, because the underside of the wings is covered by perforated aluminium panels.  Another special feature is the “forest” of 50 light columns, each 9 meter high, which start from the main entrance square, support the roof of the central lobby and continue outside of the lakeside entrance into the lake.

There is a strong Chinese feature that runs throughout the whole building: the large scale use of bamboo which is both a traditional and a modern Chinese material.  Recently new methods for the production and use of bamboo have made it possible to cover the Main Opera Auditorium with over fifteen thousand solid bamboo blocks, all individually shaped according to acoustic needs and architectural image.

There is also a material with a Finnish character: almost twenty thousand specially designed glass bricks cover the curved wall of the opera auditorium in the lakeside lobby.  Finnish nature, lakes and ice, were the architectural inspiration.

Earlier references of PES-Architects international projects include St Mary’s Concert Hall in Germany and Helsinki-Vantaa Airport in Finland.  In China, a mix-use 192m high-rise building in is currently under construction in the city of Chengdu, the result of a first prize in an international architectural competition in 2009.

To emphasize the experience of being 8 years in China design and construction market, PES-Architects in Autumn 2011 opened the Chinese design company PES-Architects Consulting (Shanghai) Co. Ltd. 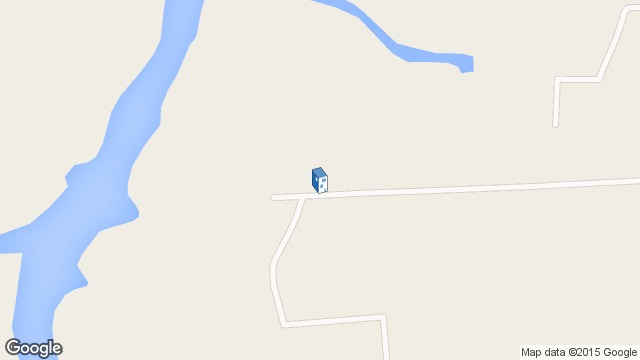 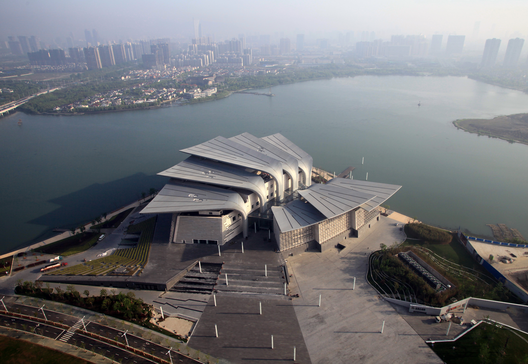