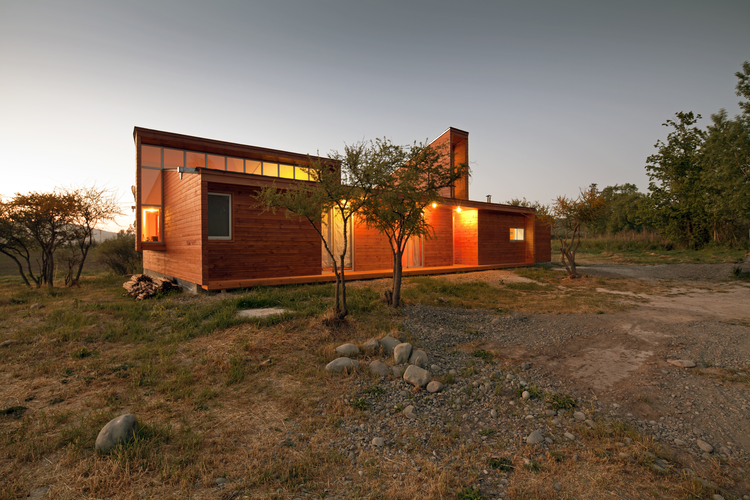 Text description provided by the architects. MJ house was designed for a young couple of forestry engineers and their two children. It has 145 m2 and is built of wood and brick. The main idea revolves around the concept of house and landscape and how they relate to the two facades; the road and the rural scenery.

As this house was designed from Tokyo we wanted to include some features of the local architecture. One of the things we saw in the houses of Japan, both traditional and contemporary, is a closed condition to the street to open condition inward, a result of the complex relationship between the public and private realms of Japanese society. Inspired by this, the house has both conditions, closed to the public road and open to the landscape.

However, we wanted to propose a dialogue between these opposed conditions. This led us to create an overlap on the roof and achieve an open relationship between the two sides through windows, framed views, and the access of light. Thus, the ceiling becomes the pivotal element of the house and its movements and angles correspond to an intention to generate a minimal impact within the existing landscape.

Another concept introduced was the Japanese idea of "Engawa" or "between", a characteristic of Japanese houses where different layers act as a threshold between public and intimate places. Therefore we designed a terrace that borders the two main facades as a continuous element, separated a few inches from the ground level allowing an intermediate space between the exterior and interior.