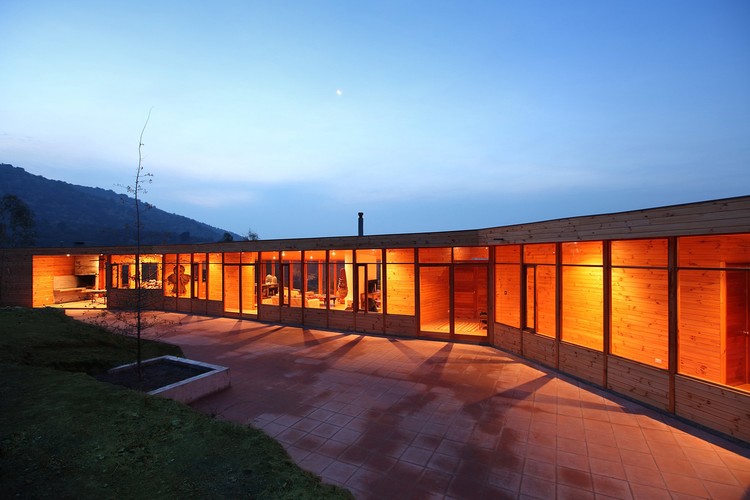 The house is located in San Vicente de Tagua Tagua, on the northern foothills of the system. This place is outstanding in terms of orientations, its 40% incline and the morphology of its soils. The commission involved a house, which required a central court or patio which organize the design of different programmes. As regards inner spaces, it was necessary to emphasise the continuity of the spaces involved so as to integrate the different activities that were developed within them.

The proposal of the project then required the superposition of local conditions with those involved in the commission.  In this way, the project is considered from the question of how to create a central patio and an integrated inner space, and how both are capable of establishing an architectural link with the place and its features.

With this objective in mind, we organised longitudinal field programmes, parallel to the hill and looking on to the valley. In this way, we have contained and defined a space between the building and the hill, which marks the overall circulation of the project.

This idea of considering the project from its section is what enables us to define and construct its overviews, the first regarding the valley, which gives it a projection of inner sky compressing our gaze towards a horizontal place. The second gaze focuses on the hill and its summit, which gives a greater height to the interiors that recognize a more immediate context of climbing landscape.

Finally, inner spaces are organised by locating the bedrooms towards the east, in the direction of a gulley that protects their privacy.  Living spaces are placed towards the north of the hill so that they have the view of the valley and the hill at the same time. These spaces follow each other from the living room, the dining room, the kitchen until the barbeque, this way they are understood as part of a constant space. Finallly, access to the project is built on the basis of a ramp that starts in a low and distant level from the project and that climbs up until the terrace of entry.