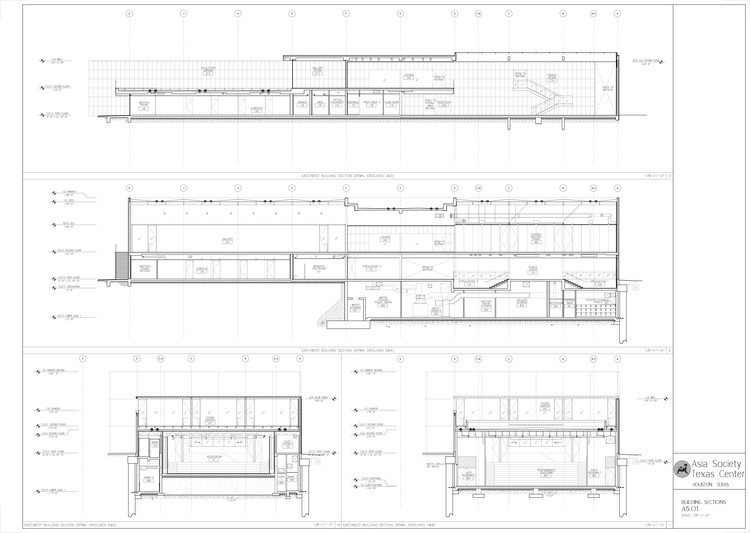 The Asia Society of Texas was founded in 1979 as a division of the Asia Society of New York in an attempt to link the state to that other important and growing region of the globe. As the organization progressed its vision through different events and venues all over the city, it realized that in order to flourish, it needed its own home base. In 2003, the Asia Society of Texas purchased a 2.3-acre site in Houston’s renowned museum district; the next year the block across the street was bought as the parking lot. In that same year, Yoshio Taniguchi was chosen to design the building. After raising the money, construction began in 2010 and was completed in just over a year.

Because of a small house on the block that would not sell, the Center’s orientation shifted to face Southmore Blvd., framing a great view of the downtown skyline from the enormous second story lounge window (so long as no other taller structures are built between the Center and the downtown skyline in the future, which is never a guarantee in Houston).  This view also captures the water garden with infinity edge and steam machines that rise over the water, obscuring the ground line and creating an almost surreal disconnection from the street.

Although he is best known for his addition to the Museum of Modern Art in New York City, Taniguchi has the bulk of his work in Japan, and his extremely meticulous attention to detail has led him to champion Japanese high modern design. The center’s stone exterior and interior is the most noted and particular aspect of the design; the 470 Jurassic limestone blocks were painstakingly cut in Germany in order to find 50 blocks from only two of the 27 layers of stone available that met Taniguchi’s standards. Of these remaining blocks, 90% was then rejected, leaving only the finest hand-selected pieces throughout the building. The use of huge glass windows throughout the project, the largest of which being 7’x15’ because that is as big as the hurricane-proof, structural grade glass panes come, allows for optimal sunlight and views. In contrast, however, are the long, vertical slivers of glass that create the front glazing of the building and induce a remarkable rhythm throughout that facade. The Grand Hall and Theater are paneled in American cherry wood, the former of which coming all from one North American cherry tree that was over 100 years old.

The 40,000 square foot project is smaller in scale for a price tag that weighed in at a hefty $48.4million, making the cost around $1,200 per square foot. Doing the least architecture with the most expensive materials seems to be in direct conflict with the current push toward environmentally responsible design, but sustainability was not entirely overlooked. A geothermal energy system under the parking lot across the street utilizes 117 wells, each drilled 250 feet deep to circulate water that transfers heat to the Earth in an energy-efficient way for heating and cooling within the building. This system is the first of its kind in a commercial building in Houston, and is expected to reduce the Center’s energy bill by $7,000-$10,000 per month.

And although the project is small, it still has quite a bit of program to offer: A 4,000-square-foot gallery, a 273-seat theater, a 3,000-square-foot education center, a water garden, a grand hall for entertaining events, a sculpture garden, roof garden, café, and more. All of this exists on only two floors in order to fit in with the height of the surrounding neighborhood in an attempt to feel as a part of the community, and not as a spectacle dropped into it.

As a result of all of these aspects, not only is Taniguchi’s Asia Society Texas Center one of the most important architectural additions to Houston since Renzo Piano’s Menil Collection 25 years ago, it is also extremely important for the entire country as his first freestanding building in the United States.