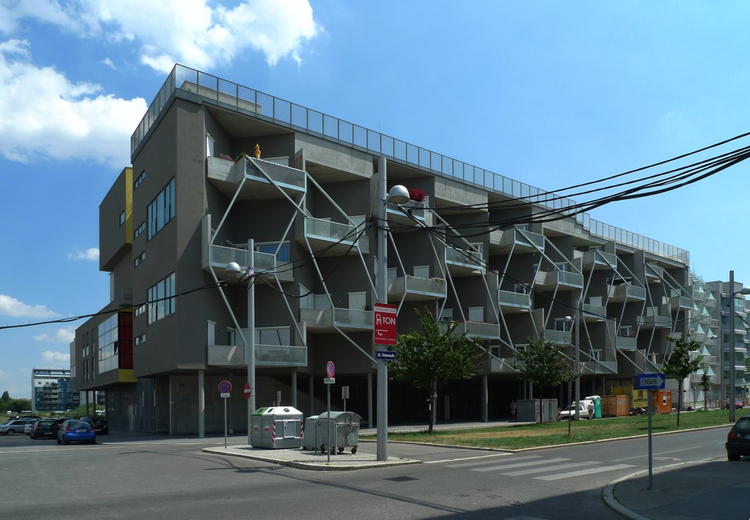 Text description provided by the architects. Analogous to the Grimm Brothers’ fairy tale The Town Musicians of Bremen (whose main characters are a donkey, a dog, a cat, and a rooster), this reinterpretation of terrace houses involves stacking different apartment types atop one another.

Dwelling types normally considered suburban, with the accompanying outdoor spaces, are stacked atop one another to achieve an urban bundle with high density: On the very bottom of the stack, the units each have an open floor plan with a gallery at the back and a garden in front; on the next level, maisonettes face on to an atrium courtyard; next there are 2-story row houses with terraces; and at the top allotment-garden “houses” are separated by courtyards.

Along the street, a wing made up of the Casablanca type on “stilts” is superimposed upon the physical site on Tokiostrasse. A simple, ribbon-like element marking the apartments in the facade (nicknamed “the spider”) provides the rigid massing with a physiognomy facing the public realm as well as an outermost boundary of the respective dwelling-units toward the street.

To the east, a green space running from north to south is flanked by the stacked structures, whose respective circulation is a new take on the Laubengang (a veranda-like walkway with a long tradition in Central Europe). To the south and north, the wings running along the property lines and enclosing the courtyard are only two stories high. In this manner, with respect to both the new structure and its neighbors, the sunlight and the view are only minimally infringed upon, and the sense of privacy and articulation toward the street remains intact. The vegetation at the center of the complex is linked to the streetscape via the open ground floor zone.

The sculptural building massing is articulated to provide the apartments with a pronounced relationship to the outdoors. Every apartment has its own adjoining outdoor space – the majority of them potentially compact gardens. All apartments are cross-ventilated; the kitchens and bathrooms receive daylight and have natural ventilation.

In addition, the residents have access to the roof surface atop the wing running along the street, with its green terrace, swimming pool and sun deck; the playgrounds on terraces are situated at “mid-level”, and the ground-level courtyard is a recreational area and playground, as well. The garage’s skylights also double as seating and illuminaires in the courtyard. The building’s exterior is characterized by the atrium and its vegetation, as well as by the terraces; the high degree of permeability at street level translates into an open atmosphere for residents and passers-by, and ensures that sufficient surface area will be available for possible future adaptations. 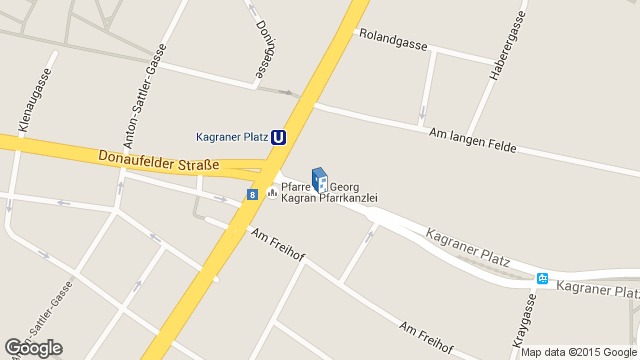 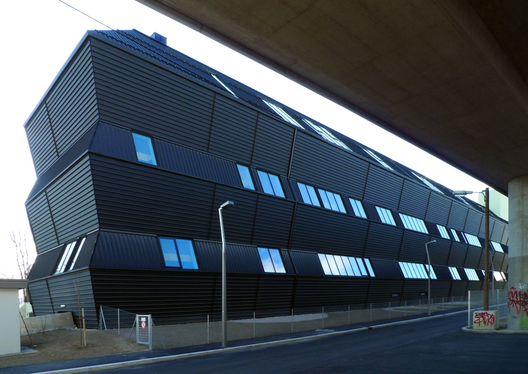 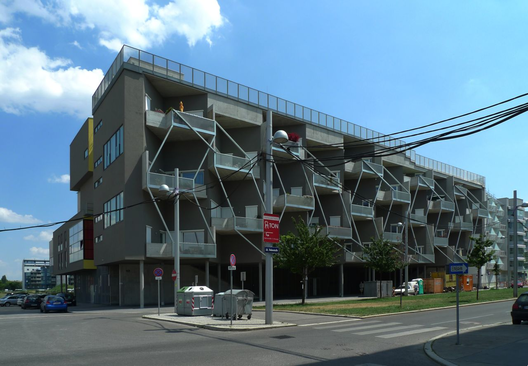