Text description provided by the architects. Winning project of the Archi<20 competition and with a 7000€ budget, this 20 sqm housing prototype has been constructed in a protected natural area in the village of Muttersholtz, in the North-East of France. The pavilion - designed following a simple generative shape, namely a circle - allows the perception of the entire surrounding landscape.

Characterized by the presence of  a light shaft in its middle, the indoor set-up has consequently been chosen according to the Sun’s position and its daily East-to-West cycle. The furniture, consisting of just one block extending around the entire house, integrates the needs of the different daily activities. To the North - the entrance side- a low-ceiling volume (night space) leads to a working one in the Eastern part of the building and to a more generous space in the Southern part, opening up to the sky. On the facade, the rythm of the openings depends on the Sun’s position as well: as a matter of  fact, the design is closely linked to all the natural elements.

The facade, beside operating as the partition between the inside and the outside, becomes functional and takes on a new dimension: inspired by the corn dryers in the Alsace plains, it allows the cob storage for drying. Changing along with the seasons, the facade blurs the immediate reading of the object, almost erasing the pavilion itself.

The central patio, at the heart of the living space, mirrors the desire to let nature enter the house. Planted with local species, this building becomes a metaphor for the natural landscape of the Ried in Alsace : in this way, the living space lies at the meeting point between unspoilt nature and controlled cultivation, becoming the symbol of a finally found balance and the basis for sustainable development. 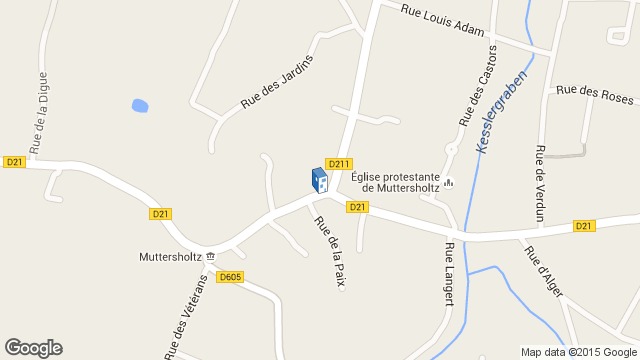