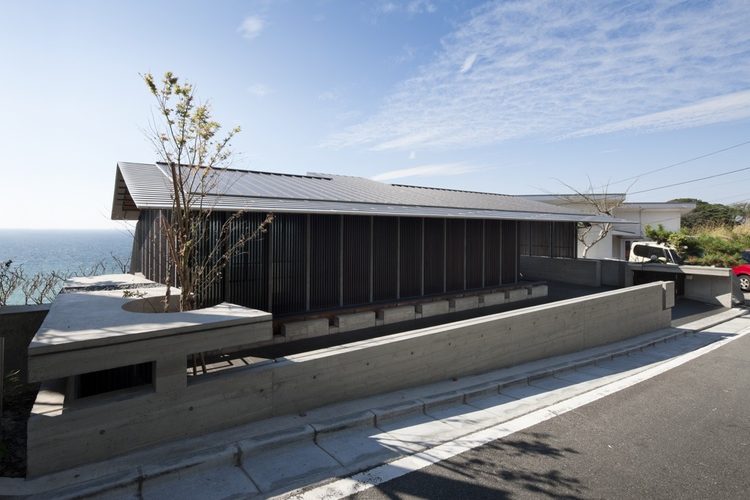 Glass and screens along the enclosed perimeter of the house gives the second floor of this residence a certain transparency. Slender, deep-set eaves cast deep shadows on the facade of the building, softening the impact of the building's physical presence in relation to its environment. The various components of the building were structured in order to allow the inhabitants to enjoy a different view of the outside on each level. The first floor features a stone floor and concrete walls finished with plaster, while the Japanese paper screens fitted inside the glass reflect the shadows of plants and trees. The hard-edged surfaces and finishes coexist with the soft, muted tones of the Japanese paper.

The second storey, in contrast, features an open-plan living space, the entirety of which can be opened up towards the ocean. A series of wide eaves stand between the outside of the house and the interior, which is articulated into smaller sections by a row of pillars. Going down the staircase-shaped terrace allows one to gradually draw closer to the outdoor landscape. The section that divides the two different elevations on this floor provides seating throughout, functioning as a unique Japanese-style verandah (engawa). A steel-reinforced concrete structure was used for the second floor, and a Vierendeel bridge structure allowed us to float a large, thin roof on top. The pillars consist of square cylindrical poles (measuring 75mm across) made of solid iron arranged in a densely packed formation using wooden modules (900 x 1800mm). By creating several areas of low-level rigidity, we were able to do away with the need for braces. 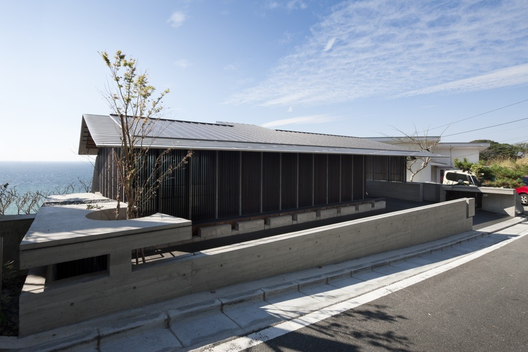