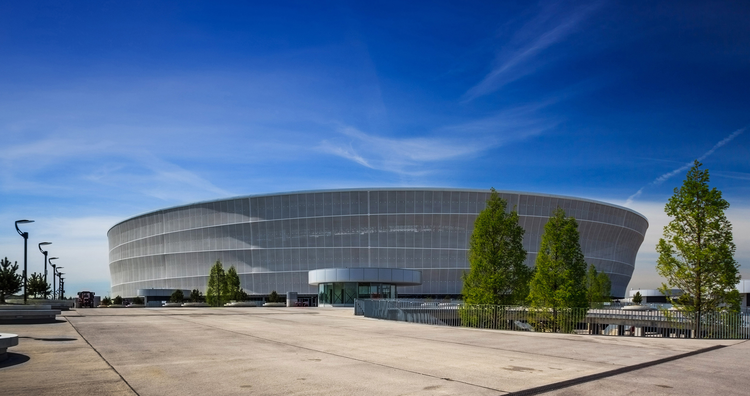 Text description provided by the architects. Background
UEFA’s decision to select Poland and Ukraine as the hosts of EURO 2012 encouraged the city of Wroclaw to organize an architectural competition for the new stadium which would hold 40 thousand seats and be prepared to host group matches of EURO 2012. 21 renowned architectural practices were invited to compete. Polish practice JSK Architekci was awarded with the first prize and in October 2007 the office was granted the commission to deliver the project.

Development site is located 7km outside of Wroclaw city centre. Its southern edge is formed by the national road nr 94, railway tracks and the tram line. Existing infrastructure surrounding the new stadium was improved by the new motorway bypass and the new tram line providing additional access to the site from west and north. Stadium development had a positive impact on the economical growth of the surrounding neighbourhood with plans of further development i.e. a new office park and the first in Poland shopping mall strictly adjacent to the stadium.

Concept design
The stadium building and its surrounding were designed to present both interesting architectural form and fulfil requirements of economical exploitation yet providing maximum functionality and flexibility. The design of the site plan emphasizes the main building of the stadium making it a dominant feature in the surrounding space. Platform surrounding the stadium on the entrance level (6m above the ground) descends gently (4% fall) to the ground level under the street overpass allowing a comfortable and collision free pedestrian connection to the railway and tram station to the south, also covering level 0 of the stadium plot with VIP entrance, driveway and parking places. Separating main stream of pedestrians from the remaining vehicular circulation routes created a friendly and welcoming entrance zone to the building.

This plateau provides the pedestrians with an extensive space and a roof for the parking lot and the service road. The plateau from the north western side is woven by with the rising plateau of the car park. This rising roof level of the car park hides the one for a shopping centre tied area. Conceived as a single tiered stadium with a uniform stand bowl, makes it possible for the spectators to be aware of a sporting event in a more exciting way. Despite the great building scale it has been successful to keep an intimate atmosphere on the whole stand. So we can experience a unique atmosphere. This stadium in its scale is one of the few with a single tier.

A clear and apparent scheme of the functional design makes a fluent admission into the stadium building possible. The bowl of the semicircular stand is attainable from 2 promenades on 2 levels. Numerous turnstiles which allows us to run onto the lower promenade are placed in a complete radius of the building. The upper promenade is easily attainable with the help of open stairwells. Both promenades form a kind and comfortable space with all possible welfare facilities (catering trade, toilets, first help, police). For a luxury the promenades were wrapped by a transparent membrane. On the one hand it offers protection of bad weather conditions, on the other hand it is closing the building form visually. The number of pillars was reduced considerably so that spacious and open promenades could be created.

Building rentable area organizing system is quite unique. Conventional designs usually locate rentable areas underneath tribune structures, Wroclaw’s stadium separates them from the structure by creating a promenade and a massive void allowing visitors admiring tribunes from underneath. Along promenades toilets and retail units ready to service 40 thousand visitors were located. Open staircases leading spectators up to the top level strengthen the feeling of openness and allow for the exposed reinforced concrete structure to be admired. Standing out mesh membrane is characteristic for the new Wroclaw stadium. It consists of a polytetrafluoroethylene covered fibreglass and is pushed on 5 ring beams of steel. The 5 ring beams refer by the horizontal geometry to the well-known Wroclaw’s modern architecture.

Stadium design was based on UEFA and FIFA guidelines supplemented with the experience of EURO 2006. All the tribune seats are roofed and provide unobstructed view of the pitch. Both promenade levels are duly serviced. On its western side business club and VIP hall were located.  Zone for footballers and media has been envisaged as well. Level +3 holds lodges with the conference rooms featuring rows of seats facing the stadium arena. Stadium will also be home to sport bar, offices, physiotherapy centre, fitness club, discotheque, casino etc. Diversification of available services allows the building to be used all day long.

Structure
The main bulk of the stadium building consists of three main elements:
- Tribunes construction of reinforced concrete.
- Steel construction of the roofing structure, with its oval shape repeated in the form of three rings at varying angles surrounding the building.
- PTFE covered fibreglass mesh membrane stretched on the above mentioned steel rings.

Roof design is formed with the light cantilevered steel structure consisting of 38 radially spread trusses sitting on a pair of columns each (one is pressured the other tensioned). The stadium roof generally appears as membrane roof with a glass ring part designed to bring maximum amount of sunlight to the pitch.

Facade
Facade belting the stadium starts at the height of 3.5m above esplanade level.  Its structure consists of 5 steel beams – rings and it is covered with partially transparent mesh membrane. Façade’s form results from the shape and arrangement of the steel rings formed with curved steel pipes. The lowest and the highest rings are placed horizontally keeping distance of 30m between them. This dimension determines the height of the mesh membrane façade. Additional dynamic factor to the facade was achieved by setting inwards and sloping the middle rings and by shifting northwards the upper fourth ring. Due to the strength of local winds affecting the elevation mesh membrane proper simulation tests in the aero dynamical tunnel were conducted during the designing process.  Another simulation of smoke extraction was performed helping to properly design mesh grid and its factor of open area.

Summary
Thanks to façade treatment stadium appears to be light and transparent despite its massive size. The façade mesh protects the usable yet open space of the promenades from weather conditions such as rain and wind. Internal LED lighting system was introduced allowing the building to project light through the façade’s mesh from inside. Overall impression of the “glowing” building is similar to that of the Chinese lampion. Thanks to the LED technology colour and pattern of the lighting can be easily changed thus the building’s character can be visually adjusted to the planned event (such as EURO 2012, league and national tournaments, music shows or other mass events) and can generate particular feel to it following the current need. 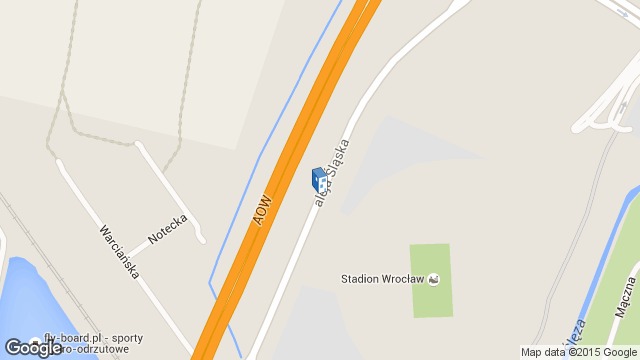 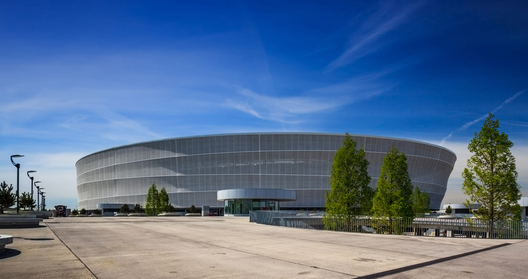