Save
In Progress: Faculty of Law and Political Sci​es of Turin / Foster and Partners
Share
Or
Copy 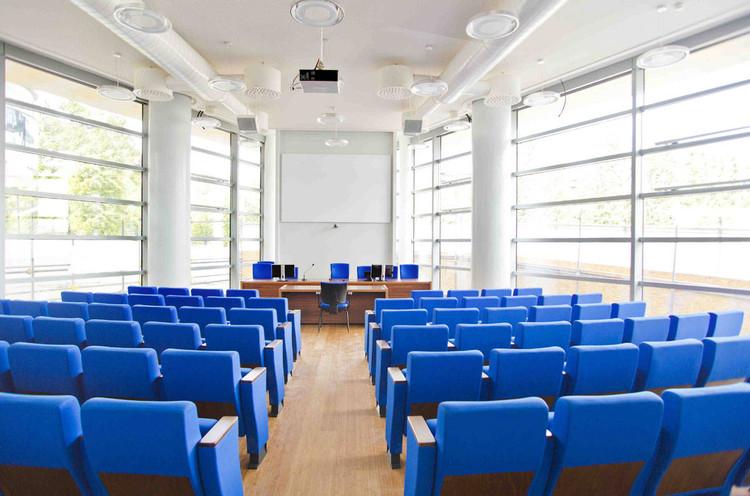 Opening with the academic year 2012-13, the new seat of the Faculty of Law and Political Sciences of Turin completes the campus that the University of Turin is building as part of a complex program of reorganization of its offices that, started in late nineties, included the moving of the faculties in new structures on abandoned Italgas areas along the river Dora.

The new buildings, overlooking the river, are the result of an international design competition launched in 2003 by the University. Winner was the group composed of Fiat Engineering (now Tecnimont), Foster & Partners, ICIS, Benedetto Camerana, Mellano Associati and Giugiaro Architettura, who were able to reinterpret the pavilions distribution imposed by the Preliminary design document proposing a block solution, broken and relieved by open passages and walkways, with the strong architectural element of the undulating roof.

Following the triangular lot, the new buildings are functionally divided into two sections: one dedicated to teaching, with classrooms and departments that face the residences and gasometers, and one for the library (with bar and language labs on the ground floor and spaces for studying room on the first floor) along the river. All five blocks are distributed into five-storey buildings (with parking and technical rooms in the basement and a covered flat roof) distributed around a circular plaza, with a total of 36,232 new square feet.

The complex is a strong personality presence in a changing part of the city, largely due to the characteristics of its envelope, made of sinuous glass and metal façades and a continuous canvas roof.

Norman Foster trademark, the free façades are characterized by curvilinear shape. Scanned horizontally by a succession of glass and corrugated metal string courses, they have been developed ad hoc on a design by Foster and produced by the Italian Focchi spa (Poggio Berni, Rimini), specialized in architectural façades system.

The roof based on a complex three-dimensional structure of metal lattice, is the characteristic element. Realized by Stalbau Pichler, is composed of a series of arches to stand bolted and connected together by an impressive edge beam (necessary to counteract the strong “shot” from the tension generated along the perimeter of the sheets) and by rods secondary connections and bracing.

The Teflon coated glass fiber membrane (Dupont), chosen for its high mechanical characteristics and chemical stability, has been produced by Canobbio with elements that cover a span each and are provided with a heat-sealed edging, which contains the metal elements of anchor and tension.

With volumes and proportions dimensioned on the urban scale (direct reference to the circular nearby square Santa Giulia), the new campus, set on North American models, is a porous body whose open spaces are usable not only by students but also by population of a neighborhood that just the new development, an element of urban regeneration, is helping to revitalize, together with the neighboring industrial areas in the process of recovery (between operations concluded, just past the Dora, the showings and the transformation of the former knitwear factory Hosiery Basic Village in Turin Baietto Battiato former Black and Ceat and structures of the former Tobler, respectively, in which Alberto and Vittorio Neirotti Rolla and study Cucchiarati have obtained new residential space).