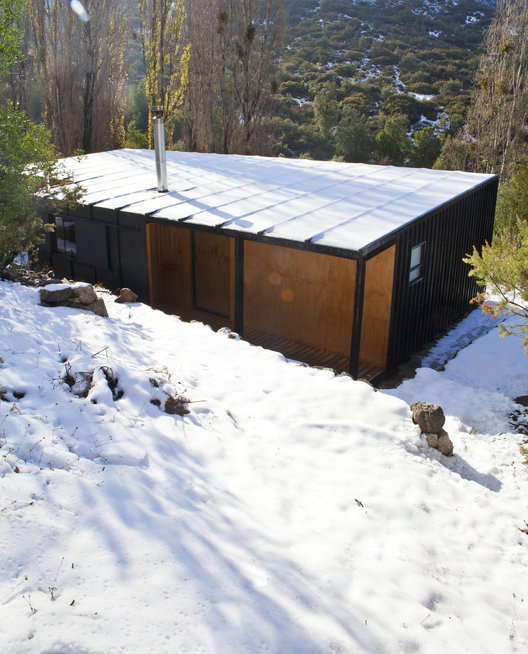 Text description provided by the architects. The challenge was to build a weekend house, in Caleu a small town one hour away from Santiago (the capital of Chile), with a limited budget. Caleu´s climate (located in the Coastal Mountain Range) presents drastic temperature changes in the different seasons throughout the year.

The house is located on the only flat plane that we found on the site and built on the ruins of an old house. This was the favorable site due to its flat condition, orientation towards the sun, and its privileged view. We considered, as well, the experience of the previous owner who used to live in an adobe house oriented east-west on its long side.

The program of the house is solved in a rectangle of 7,35 x 14,7 m side, which contains a central public area (living and dining room along with the kitchen) that separates two sleeping areas, the master bedroom on one side and two smaller bedrooms on the other side. All of the areas are connected by an outer corridor with a width of 1,20 m towards the east; this corridor provides a covered roof in winter and a wonderful shade in summer. It is definitely in summer where the corridor plays its most important role.

For this project we used two materials to establish the structure of the house. First, the pine structure, composed of three joined planks of 2x5” that allowed us to set up the length we needed to structure the house. Second, plywood boards were used to brace the columns and beams as structural elements and remained as the interior material of the house; in other words, the structure and aesthetics of the project are built by the same elements, therefore there are no extra finishing materials, and everything is within sight.