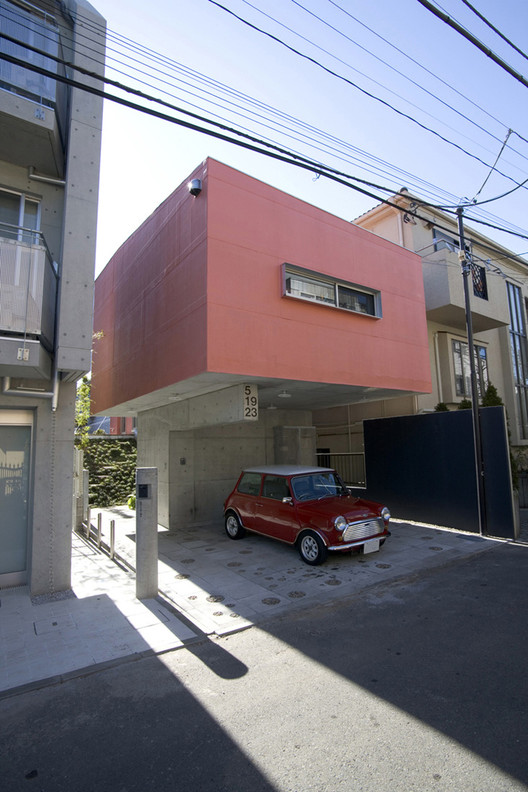 These are large questions for what is, after all, such a small house. But it is at this scale, where there is literally no room for really big gestures, nor freedom to make unrestricted choices, where the answers to such exaggerated questions are essential.

The site we were presented with by the client is typical of Tokyo's older residential areas - defined by narrow streets whose character emerges more from the individual choices of the homeowners than from any comprehensive urban plan. More specific, the elongated and narrow plot (5.4m x 16m) is surrounded on all sides by houses built to the razor's edge of their property lines and to the maximum height the local zoning laws allow. The result; a site flanked by tall blank walls on its two long sides, and facing directly onto a neighbour's home to the South, with only a sliver of open sky available on the south-east corner.

The site is for all intents and purposes an artificial valley.

The clients, a middle-aged couple, wanted a small and efficient home that would accommodate their desire for personal space - for each to pursue their own hobbies, and especially a small painting area and work station for the wife. They also asked for access to outdoor space that could be used easily in daily life, and if possible, a garden where strawberries could be planted to indulge in a longtime hobby of making home-made jam. A garden it seemed, was essential.

Coming to terms with the site required either denial or complete acceptance of place. Luckily we had the clients as inspiration, each of whom fondly remembered their childhood in central Tokyo - a childhood where daily life was a public event, the interiors of their homes open to passers-by and the street a part of their regular routine. Their nostalgia led us to an opportunistic approach that would take as its starting point the idea that the existing site and the neighborhood was a legitimate landscape - one that did not need careful blocking, framing, or filtering to activate.

This proved to be a brilliant excuse to be practical, and to ignore the brutality of the context. But it also became a kind of research on how to live in a modern and dense city where the "pastoral villa" model simply could not work. We wondered if the age of retreating from the city, of denying it by focusing on inward-looking spaces - a typology made famous in Japan - could be abandoned, finally, for something more optimistic. With the clients blessing we aimed to make a house that took advantage of what little access to light was available. We developed a spatial sequence that used the depth of the neighbors properties to suggest largeness, accepting the possibility that at certain times of day the inhabitants would live their lives in view of their neighbors.

This approach did not mean we aimed to make a glass box. To the contrary, the house is instead conceived around a constrained (and efficient) wedge of glass, creating a boundary for a simple circulation route that captures as much of the sky as possible. Intimate functions, including bath and bedroom sit on the ground floor, connected directly by a thin paper-walled tunnel that changes its character throughout the day. The "public" spaces are found on the second floor, cantilevered out over the parking area. They are connected with the entrance by a stairway that follows the slope of the garden to a room-like landing and large outdoor deck before continuing up along a gently sloping gallery space. Glass walls facing south and east define the stairway and living room, exploiting the limited access to natural light, and looking onto a sloping garden, a deck, and the neighbour(-hood) beyond. The home is closed on its remaining sides, but the circulation extends outwards into the length of site so the experience is one of openness rather than claustrophobia.

Surprisingly the home feels larger than its 80 sqm would suggest, due in no small part to the relatively long views outside. The garden supports this effect - treated not as an oasis, nor a place to go for tranquil zen-like escape, but as an active green space. Visible from the street, it is intended to be entered, walked through, sat upon and constantly changed through new plantings and the activities of daily life. The house is treated in much the same way, fitting into the context without attempting to alter it, mimic it, or deny it. The answer to how to live in the modern city for this house is simply to take it as it comes.